This morning we made a bit of an effort to get up a little earlier and go down to the lake, but it was 7.30am when we got out of the hotel, by which time there were far fewer people out doing their exercises down at the lake. We were slightly delayed as we had managed to score a big bag of lychees from a Russian woman staying in the hostel before we left – she had bought more than she thought she could eat – so we happily munched on those as we made our lakeside circuit. 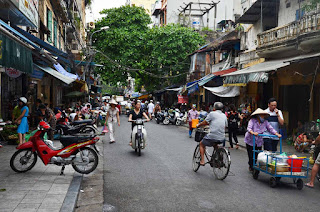 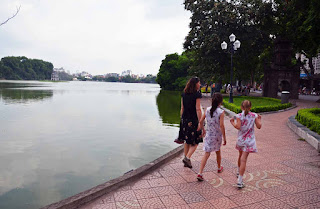 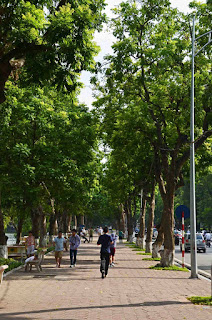 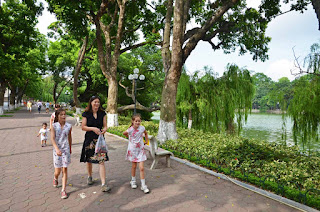 At breakfast back in the hostel we talked to a British couple we had met earlier who are also travelling around Southeast Asia with their children. They mentioned that they had gone out to the Cambodian embassy yesterday to get their visas. We had planned to get ours at the border, but we had heard enough horror stories about people being extorted for bribes that we thought that it would probably be worthwhile getting them in advance, too – even if it was just for a bit of peace of mind - so we headed out to the embassy after breakfast.

It took us about half an hour to walk there, and as the day was very hot (the temperature eventually reached 37C), we were weary and dripping by the time we arrived. Thankfully, the official who welcomed us was extremely friendly and efficient and we were soon filling in forms at a big wooden table outside his office. Then, while I went across the road to get photocopies of our passports and the official went through the forms, Kate and the girls sat in his very cool, air-conditioned office. We paid a bit extra for the express service and so were soon able to walk away with our newly visa-ed up passports.

On the way back to the hostel, we stopped off at a cafe in order to make use of its wi fi. It had occurred to us that we might be able to get our visas for Laos ahead of time, too – and the Laos embassy turned out to be reasonably close, so after an iced coffee and a beer, we headed off in that direction. On the way there, we looked out for somewhere to have some lunch, eventually stumbling across someone grilling skewers of beef over charcoal. Here, the 'restaurant' occupied the tiled interior of a long-defunct shop with just a few kiddies' plastic chairs set up around the perimeter. But oh, were the skewers good – we went back for seconds and thirds.

Unfortunately, the Laos embassy was shut for lunch when we got there, so we went into a very upmarket deli just up the road to get some cold water and ice blocks. The deli was obviously set up to cater to the diplomatic staff from the many embassies in the area, along with the other rich ex-pats in the neighbourhood – it sold an amazing range of European cheeses and meats, including whole legs of Bellota ham from Spain and expensive Italian wine. The shop staff were very friendly and gave the girls free pieces of a mango that one of them had brought in from their garden – they even gave us a whole one when we left. We then walked up the road a bit further and sat beside a small lake, finished our ice blocks and then started to teach the girls the Australian national anthem as a way of killing time. By now, the temperature had reached its maximum and we savoured every whisper of breeze that passed over us. 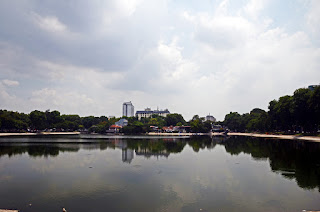 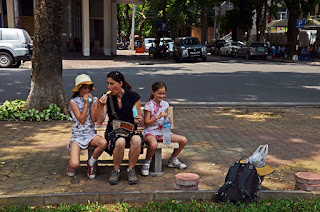 When the embassy finally opened up, we went in, filled in some more forms, handed over our passports and then headed back to the hostel, stopping off for a few more beef skewers on the way. In the evening, having showered extensively, we went back to our street-corner pub for our customary cards, skewers and beers, and then walked back to New Day for dinner.
Posted by SGKZ at 10:00