Crackers in the room for breakfast again, then Kate spent some time sorting out our next hotel (in Da Nang), so it was about 11am by the time we made it downstairs and back on our bikes. We had reserved one of yesterday's bikes – the one with a cushion on the rack at the back – along with another that had a toddler-sized seat on the back that Zoe managed to squeeze her slightly larger-than-toddler sized backside into.

We rode back to the beach but this time we turned left just before we got there and went in search of a restaurant called Cay Me, which had been recommended on TripAdvisor, and which we eventually found. It was pretty basic (with some of the worst brickwork I've ever seen), but the food was good and afterwards, the guy who served us said that we could leave our bikes there, so we locked them up and walked down a little track to the beach, which was virtually empty. There were some sun loungers set up right at the top of the beach and some big umbrellas set up closer to the water, so we dragged a few of the former down to one of the latter and then started to strip off. Again, it was overcast, but again, it was plenty warm enough to make the sea look very inviting and we were all soon properly immersed. Again, the girls couldn't get enough of the warm water, and I found a couple of empty coconuts to keep them completely amused. But eventually Kate and I decided that we had had enough, so we all wandered back up to Cay Me, where the girls had some mango pancakes. 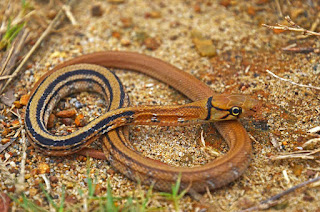 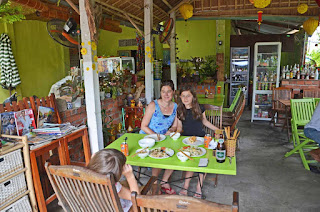 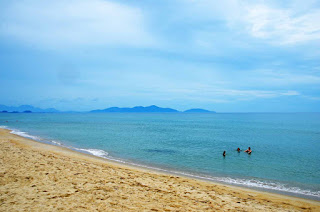 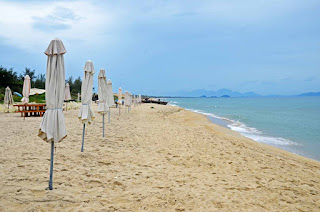 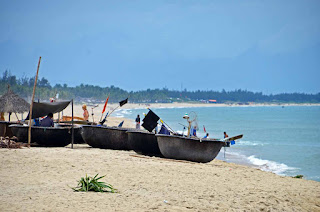 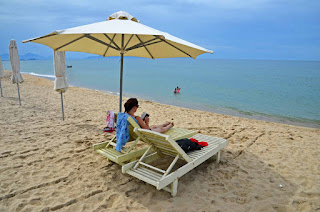 Back at the hotel, we all had showers and then we walked into Hoi An. One of the dishes we ate at Cay Me was the traditional banh mi, a piece of baguette filled with pork and a variety of other fillings. As we walked through the outskirts of town we came across a guy selling banh mi from a cart (he was even freshly grilling the pork), so we grabbed one to take the edge off. When we got into the centre of Hoi An we happened to look up and saw some people eating on a rooftop terrace, so we set off to see if we could join them. We quickly tracked the restaurant down – it was above a shop selling some really cool movie-related paraphernalia (more of which later) – and climbed the stairs to the top. It was quite a warm night, and being right up top of the building meant that we enjoyed a light breeze as we ate some decent food while listening to backpackers drone on inanely about their travels and some wholly inappropriate music. 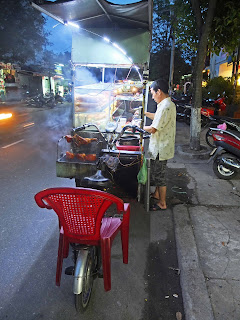 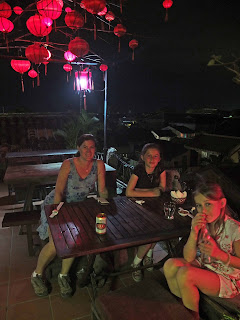 It was still early by the time we had finished the meal, so we went looking for somewhere to have a cheap beer, but unfortunately our musical travails weren't over. Everywhere we went we were followed by bad tunes – be it loud dance music pumping from dark bars, badly played live music blaring from boats moored on the waterfront or the insipid muzak being piped to speakers set along the streets – and after a while we gave up and headed for home. As we left the centre, we finally escaped the music and found a pleasant little restaurant with some tables on the street, so we stopped there and ordered some mango pancakes for the girls and beers for us. While we played cards, we eavesdropped on the conversation going on at a nearby table. A young couple from Queensland had bumped into two blokes they knew and they were blokily discussing their impressions of Vietnam, the places they'd been, the things they'd seen, the beers they'd drunk and so forth – a masterclass in low-brow youthful bravado. So we couldn't help smiling when the discussion turned to their studies – one of them was a medical student while another was about to start a PhD in chemistry, providing a complicated explanation of his planned project, which involved measuring the behaviour of methane as it reacted with other compounds at timescales measured in femtoseconds.
Posted by SGKZ at 00:56