In the morning, Flora came around with three of her dogs and she, Kate and the girls took them for a walk to Delphini – the next beach around from us. It was incredibly blustery and they came back later looking rather windblown. The girls then helped Johannes to plough his vegetable bed in preparation for planting some spinach. 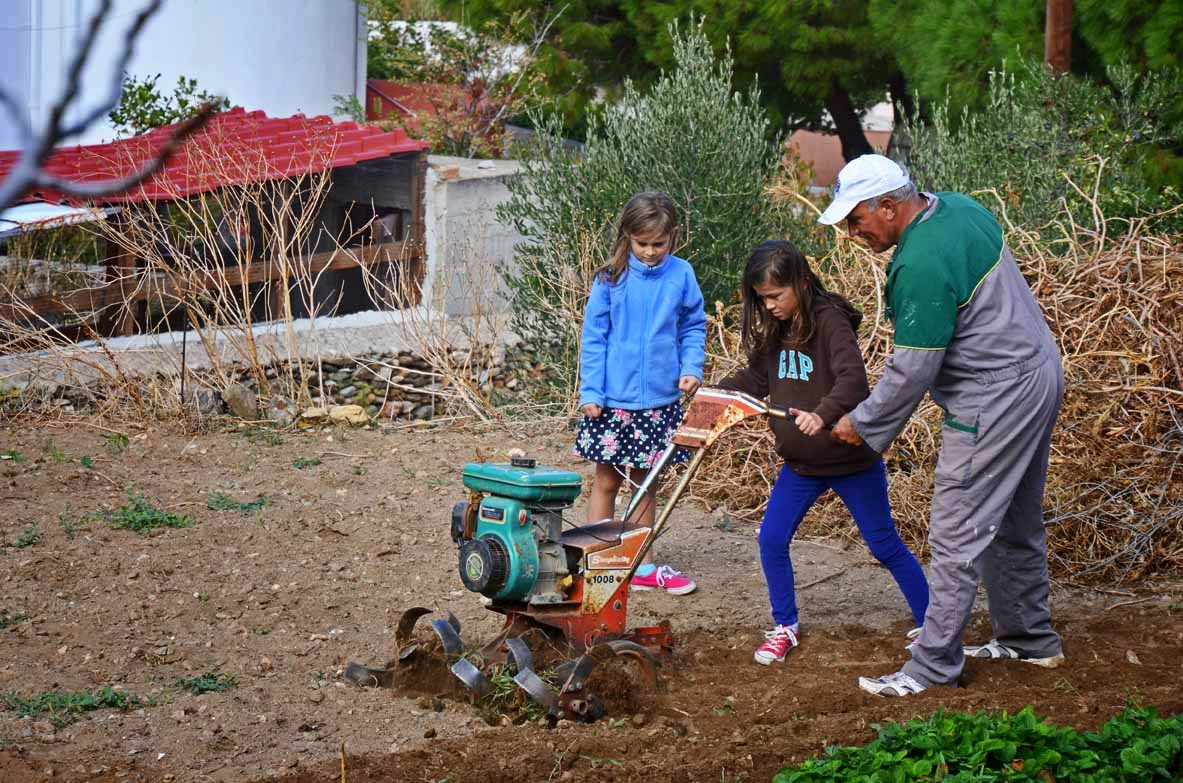 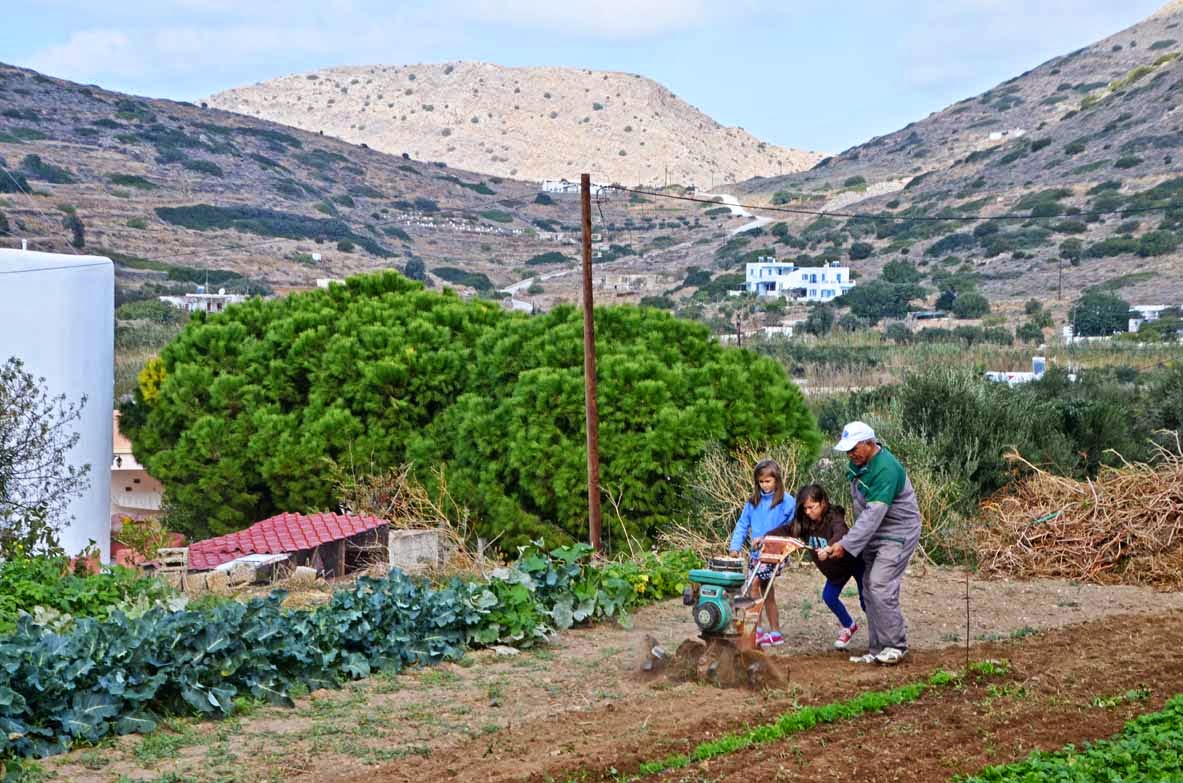 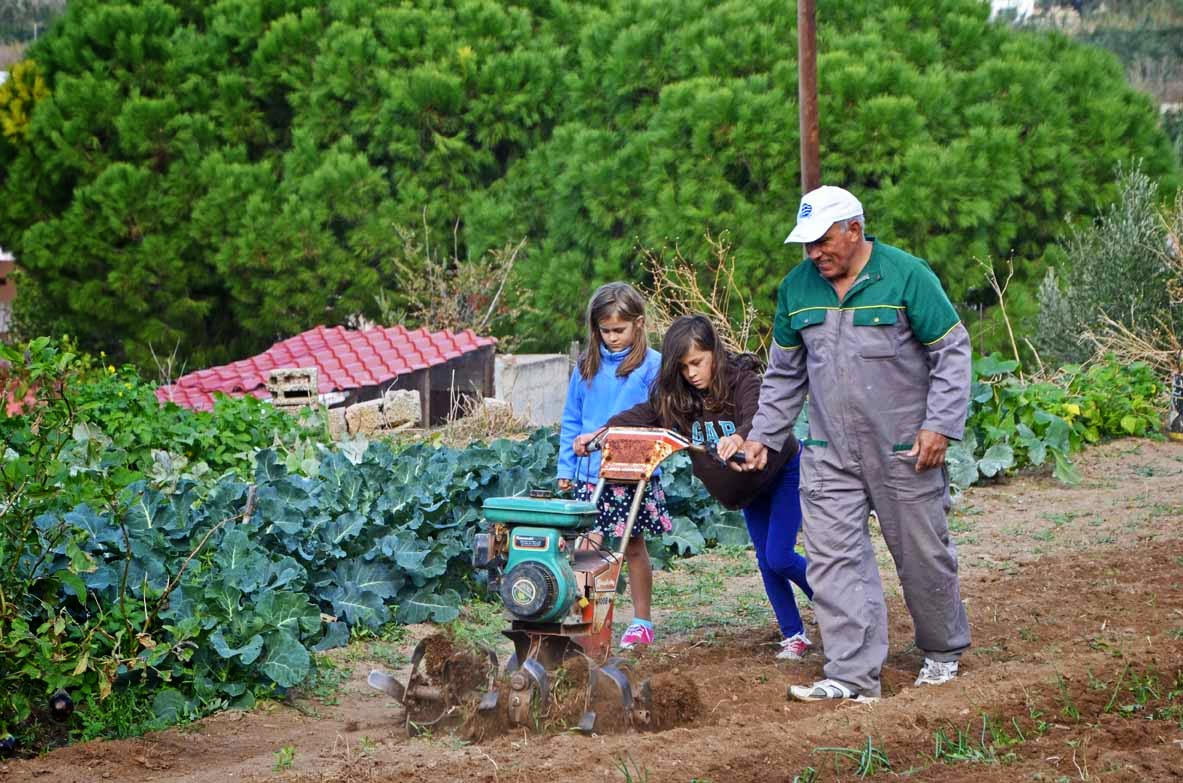 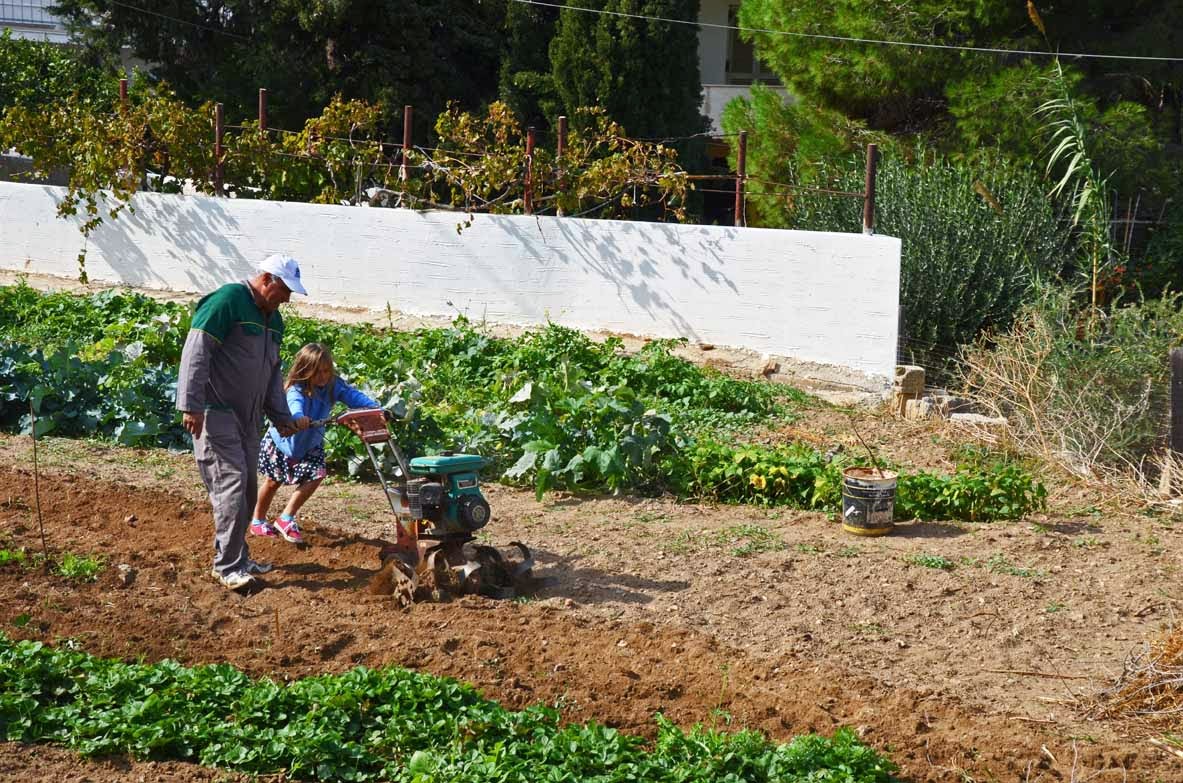 Along the route that we take to get to the beach there's a mysterious and alluring taverna that only seemed to open for lunch on weekends. As we walked down for a swim, we would see tables of locals having long, leisurely meals there and wish that we could join in. Kate mentioned it to Flora and learned that it was run by a guy who did it almost as a hobby – opening when he wanted to, serving what he felt like cooking. We were intrigued and arranged to have lunch there with Flora.

There were several full tables when we arrived and it took us a little while to be served. There were no menus – the owner/chef/waiter told Flora what was on offer and she translated for us. It all sounded so good that we ordered too much, so we reluctantly chose a few dishes to take off the order.

The food, when it came, was lovely – simple dishes cooked well – a fresh salad of cucumber, tomato, olives and capers; braised squid and octopus; slices of roasted pork; a rich tomato and cockerel casserole, fragrant with cinnamon; and a skewer of chargrilled pork with the ubiquitous flatbread, which had been put on the grill and seasoned with salt, pepper and dried oregano; all washed down with a little aluminium jug of white wine. Inevitably, Flora knew several of the other diners, one of whom sent over another jug of wine for the table. As Flora doesn't drink and Kate was going to have to drive later, the job of emptying both jugs fell to me, a challenge that I valiantly took on and proudly completed. 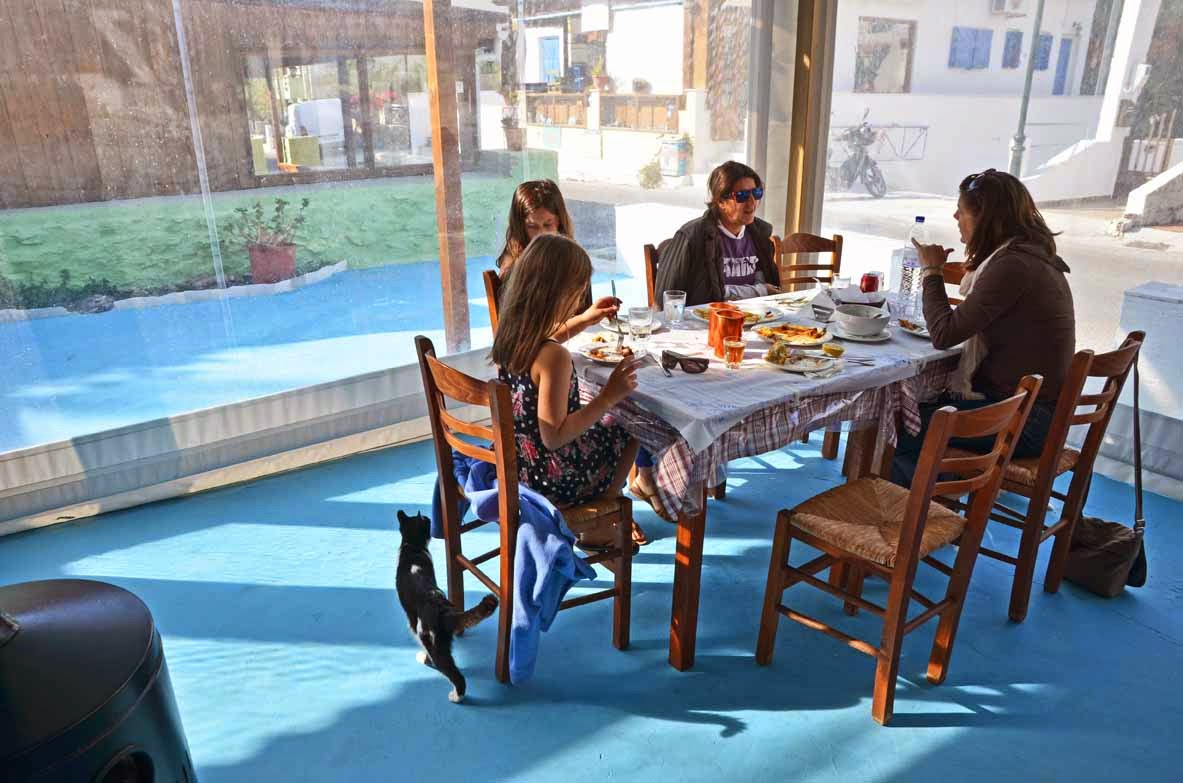 On the walk home, we were greeted by a gorgeous fluffy tabby with the most amazing paws - they were a different colour to the rest of her legs and looked enormous (it may have been an optical illusion brought about by the colour difference), and when she moved them, the shifting fur made them change colour. 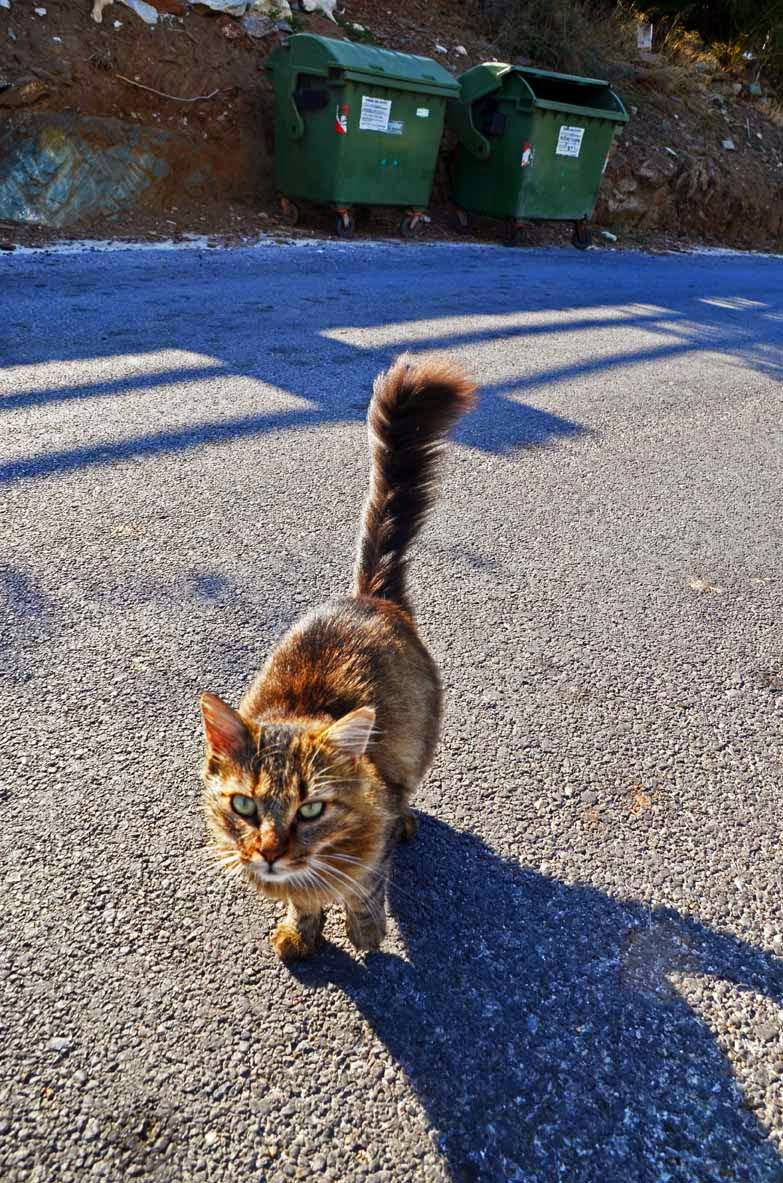 It was now time for me to meet the mysterious Mrs Bates, an 83-year-old British ex-pat who Flora helps out most days. For most of the time we had been here, we had heard stories about Mrs Bates from Flora and Egle, the Lithuanian volunteer who's also living here. Kate had finally met her a few days ago and not long after that, she called to invite us for lunch with her and her Australian friend Lorraine. As we had already arranged our lunch with Flora, we settled on tea in the afternoon.

So, we hopped in the car and drove a short way up into the hills to where Mrs Bates lives with her 14 Cavalier King Charles spaniels. Barefoot, dressed in form-fitting all black and very sprightly for her 83 years, she invited us in and we sat together in a large, high-ceilinged room by a sweet little pot belly stove. Everyone on the island is obviously feeling the cold – Flora is wearing a big parka now – and Mrs Bates had lit a fire in the stove, making the room rather stifling and intensifying the all-pervading background odour of wet dog. She went off to the kitchen and brought out a tub of ice cream, which she, the girls and I proceeded to polish off, and then she let the dogs out for the girls to play with in the yard.

A knock on the door and the barking of dogs announced the arrival of Lorraine, who moved to the island 35 years ago but is heading back to Australia in a few days. Following the breakdown of her marriage and the drying up of her English-tutoring work due to Greece's economic problems, she has decided to move 'home', taking her (naturally) reluctant 24-year-old son with her. We all had a great chat and Lorraine visibly both relaxed and perked up – the move is obviously a big wrench and pretty stressful, and the chance to talk to some fellow Australians about her plans seemed to give her a new feeling of optimism and excitement about what she was doing.

After a while, Sarah came in complaining that she felt a bit odd. She was wheezing and a little flushed and it was clear that she was having an allergic reaction to the dogs. This was interesting in itself, as she hasn't had a reaction to the cats – it would seem that she's more sensitive to canines than felines. It also gave us an excuse to make a move for home – it was well into the afternoon by then - and we gathered up our stuff and bid our farewells.
Posted by SGKZ at 13:07