Last night's late departure was combined with an early arrival this cold and frosty morning – our train pulled into the station in Ulan-Ude at about 6am. Using a combination of a mud map I drew yesterday and Google Maps on Kate's phone we managed to find the hostel office without too much drama, but our apartment (located across the road from the hostel itself) wasn't ready yet. Thankfully, they let us leave our bags near reception, however, and gave us vague directions for the centre of town.

It being so early, very little was open, but we found a 24-hour Subway outlet and went in for a coffee and a cupcake. To kill some time, we started a game of cards, but after we had been playing for a while, the guy who had served us came over and shyly proferred his mobile phone with a Google Translate message telling us that cards were prohibited. This was our signal to move on, and we wandered into town, past the enormous statue of Lenin's head and down the hill to the Uda River. On the way, we stopped briefly at the 18th-century Odigitrievsky Cathedral, the first stone building built in the city. While the girls played in the little adjacent playground, Kate and I took turns going into the cathedral itself. It being Sunday, there was a steady stream of very observant locals going in and out, the women all with their heads covered and everyone crossing themselves and bowing numerous times as they entered and exited. Inside, they moved slowly around the rooms, stopping to pray to the clearly very old paintings of their favourite saints and to occasionally lean over to kiss an icon of some sort. 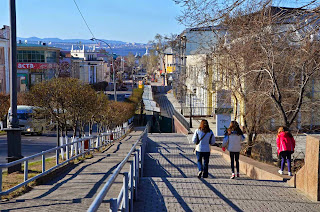 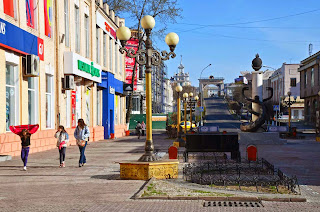 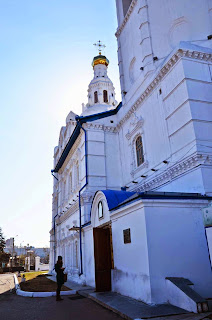 We then looped back and into town, stopping to buy something for breakfast, which we ate in the square beside a big fountain. We've obviously timed our trip to coincide with fountain-cleaning season – here as elsewhere, we watched a team of men clambering around inside the dry fountain and then came back later to find the fountain in full flow. After a bit of a wander to check out the options we then went into another of the ubiquitous cafeteria-style restaurants, this one going by the name of Appetite – obviously chosen by someone with a deep appreciation of irony. 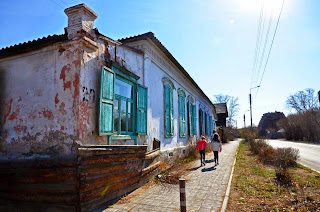 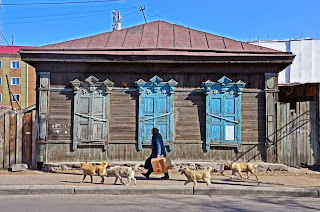 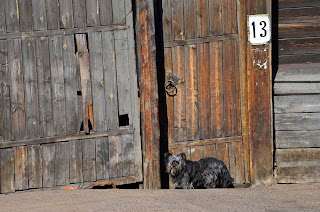 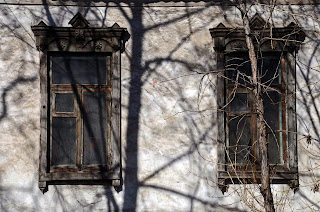 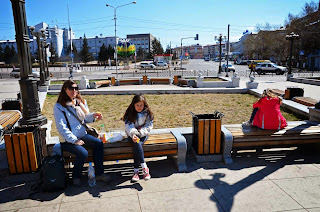 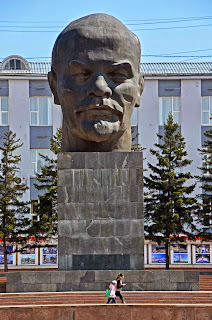 By the time we had finished our meal it was almost 2pm, so we made our way back to the hostel, where we checked in and grabbed our bags. The woman on reception asked if we had registered our visas and was quite horrified to discover that we hadn't, so lo and behold, on one of our final days in Russia, we jumped through that particular bureaucratic hurdle.

We were then led over the road to our apartment, which proved to be rather less salubrious than all of our previous accommodation on the trip. At one point, Kate surreptitiously called me over to our bed and used her eyes to direct me to the floor on the far side. I expected to find some sort of expired vermin, but was greeted by the sight of an unwrapped condom. Charming. The girls' sofa bed was incredibly narrow and when we tried to do some washing, we discovered that the cord from the washing machine didn't reach the socket, so we had to go over the road and get an extension lead. This was just one of the excursions we had to make over the road as we also had major issues with the wi fi – it turned out that they hadn't paid their bill, and Kate kept going over to ask what was going on and they kept sending 'the boy' over to try to help sort it out. And all the while, we were giving and receiving static shocks. I don't know if it's the dry air or the prevalence of synthetic fabrics but this has been a trip for static and this apartment was the worst.

Eventually everything was more or less sorted out so we headed out for dinner. Rather than trekking all the way back into town, we decided to check out the little cluster of shops and restaurants near the apartment. As we were looking into one place - a Mongolian restaurant - two girls standing outside having a cigarette started talking to us in English. They recommended the place, so we went inside and got a table. The menu was only in Russian, but it had pictures of most of the dishes so we selected four and pointed them out to the waitress. Just after we had ordered, one of the girls came over and offered her services but we said we were fine. We weren't. When the food arrived, we discovered that two of the four dishes we had ordered were liver-based. However, we had over-ordered anyway, so managed to find enough on the plates to fill ourselves up.
Posted by SGKZ at 14:53