This morning the alarm went off at 4am Moscow time and by 4.40am (9.40am local time) the beds were stripped, our bags were packed and we were stepping off the train in Krasnoyarsk. It was a sunny day but quite cool, with a gusty breeze that brought the temperature down a few degrees. We walked out of the station to the fountain where we had been told we would meet our ride to the hostel. Sure enough, not long after, a young, bearded Russian man greeted us and took us to his car for the short ride to our accommodation for tonight.

The softly spoken Anton and his more ebullient wife Kate had set up the Granada hostel after staying in similar places during their travels in northern Spain. It seems to be doing well, but we got the impression that the business had completely taken over their lives. They kindly upgraded us from two double rooms with an external bathroom in the hostel to a larger room in a different building around the corner with a double, single and sofa bed, and our own bathroom.

Bags deposited and suncream applied, we walked into town and to a bus stop (stopping on the way to pick up some supplies and for a really good coffee at Mark's Cafe - a super cool coffee bar set up inside a small van parked by the side of the road). After a short wait, we hopped aboard the number 37 bus, which took us way, way out of town to the local ski resort. The resort borders Stolby National Park, which is famous for its, yes, stolbies, which are large granite outcrops that rise up and above the mixed pine and birch forest (the rock formations attracted climbers, who developed a new method of cliff climbing called Stolbisty, hence the name). We took the chairlift to the top of the mountain and walked up to a lookout from which you could see a number of stolbies. A path led away from the lookout and down into the forest, so we decided to explore further. The weather had started to close in and before long, it was raining and then snowing. The path was becoming progressively muddier and the weather progressively more miserable so we decided to turn back. By the time we reached the top of the chairlift, however, the sun was out again and we headed over the other side, where we had a good view of another stolby. The slope we walked up here was the baby run for the ski resort, and beside it were numerous little wooden platforms with roofs, seating and simple charcoal grills – clearly the food concessions for the resort. 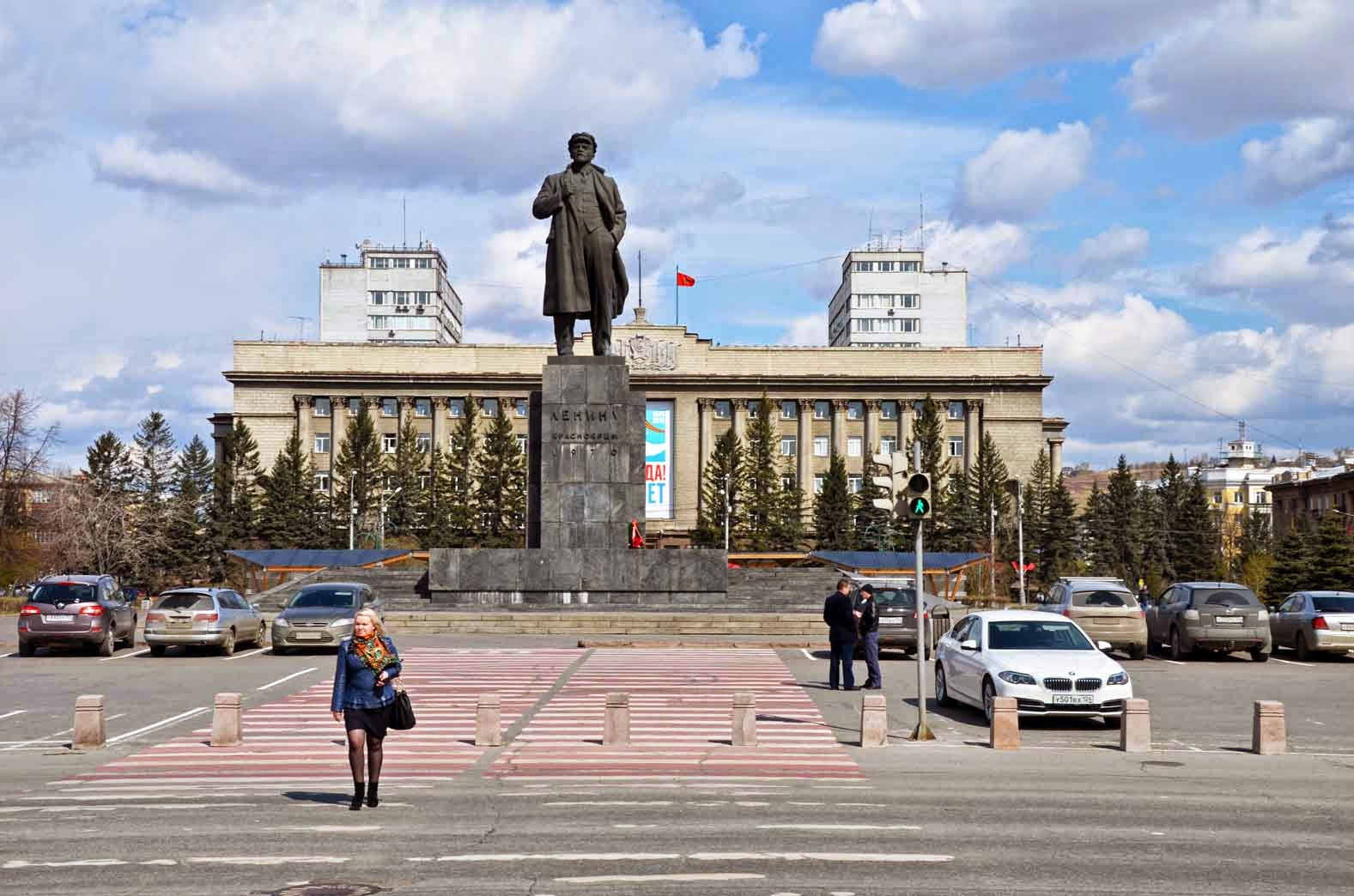 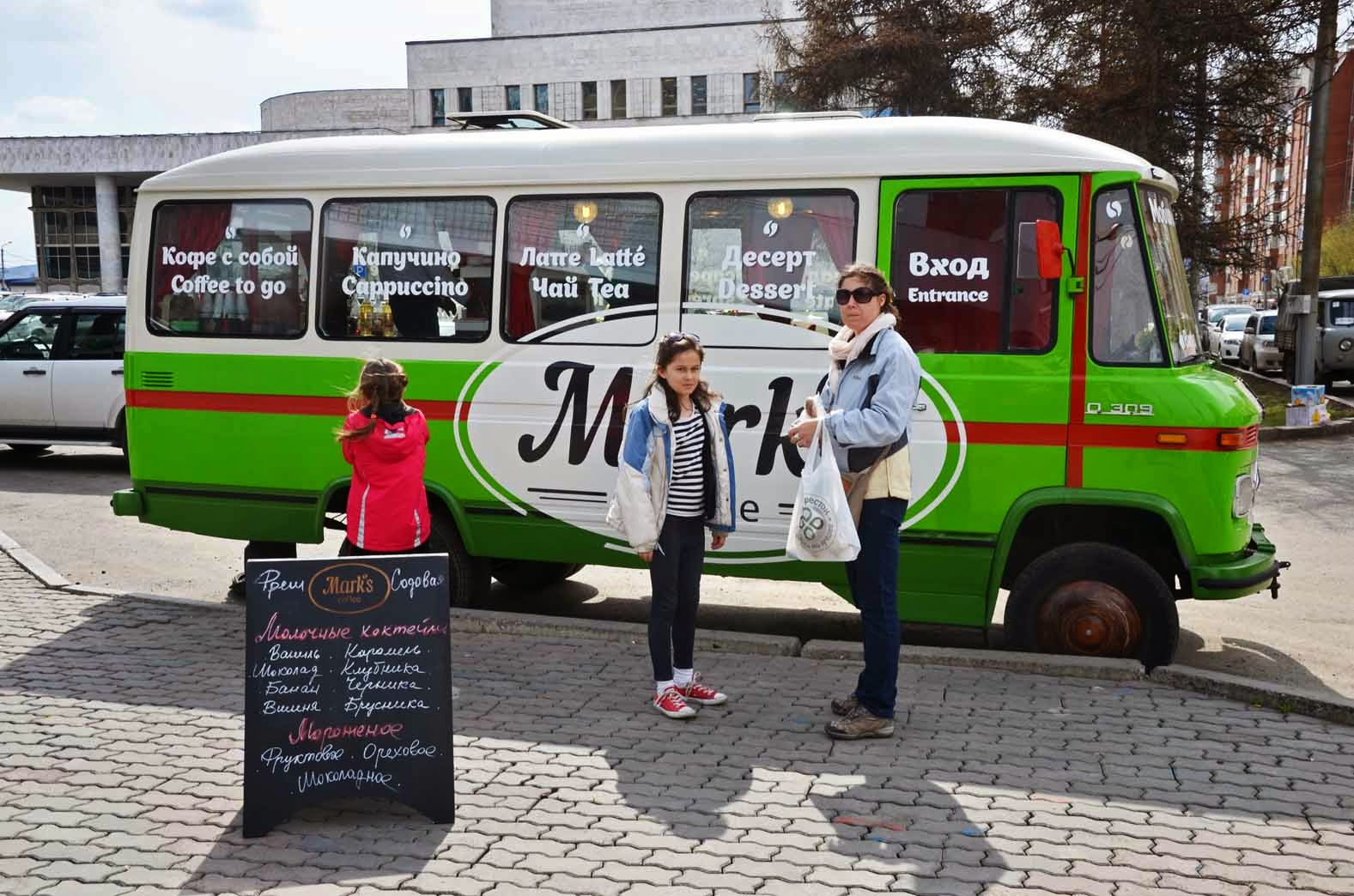 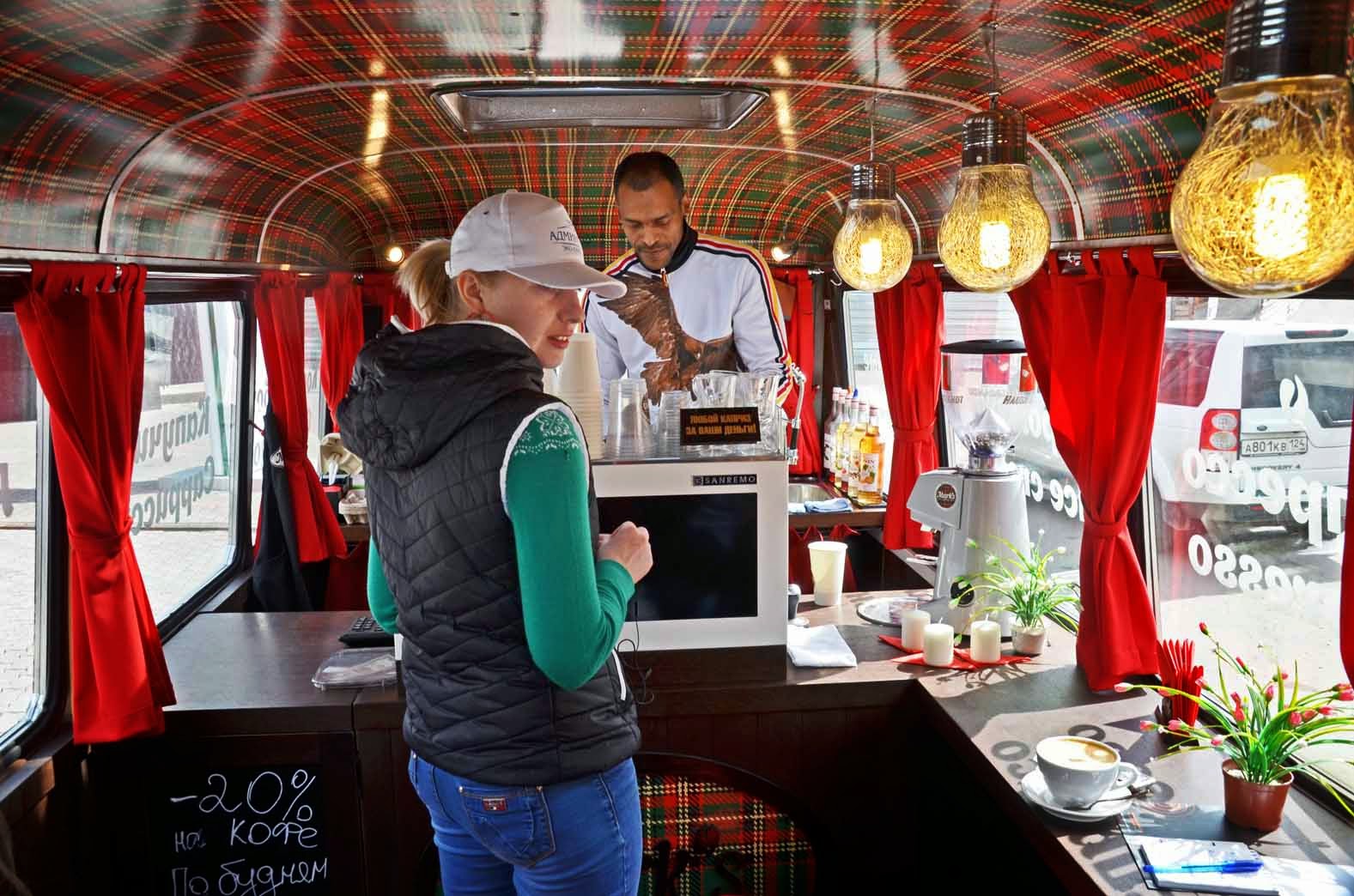 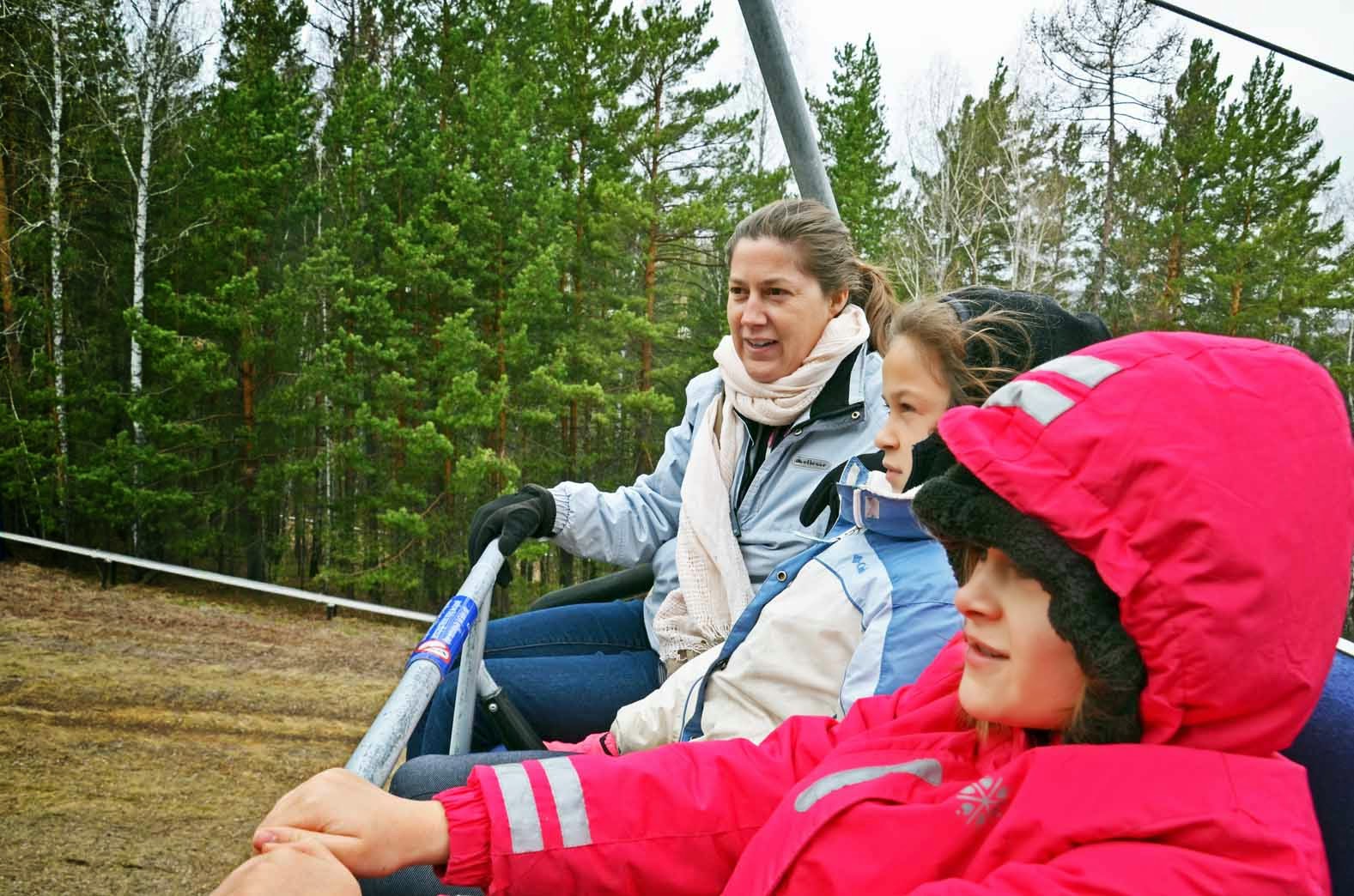 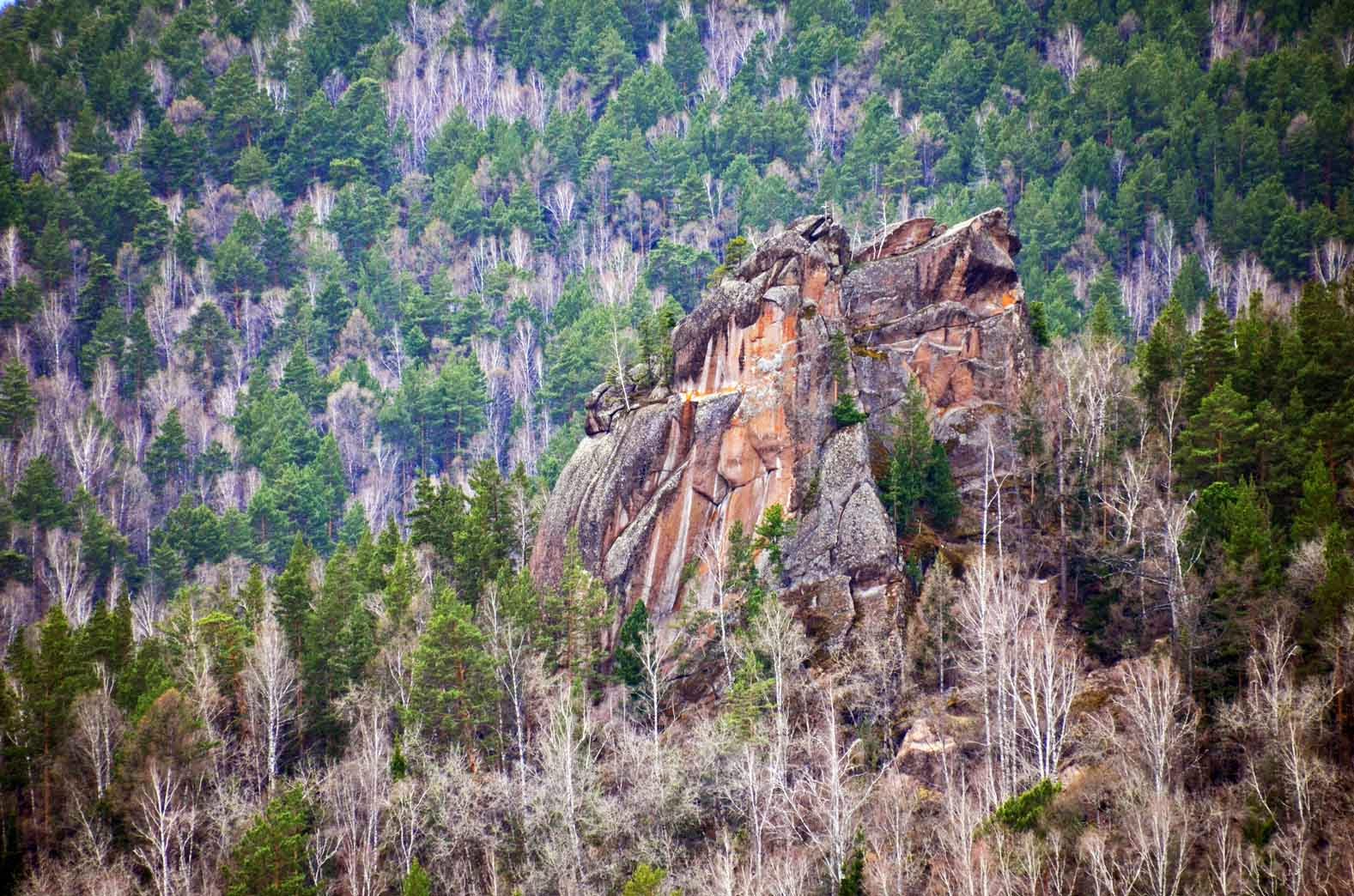 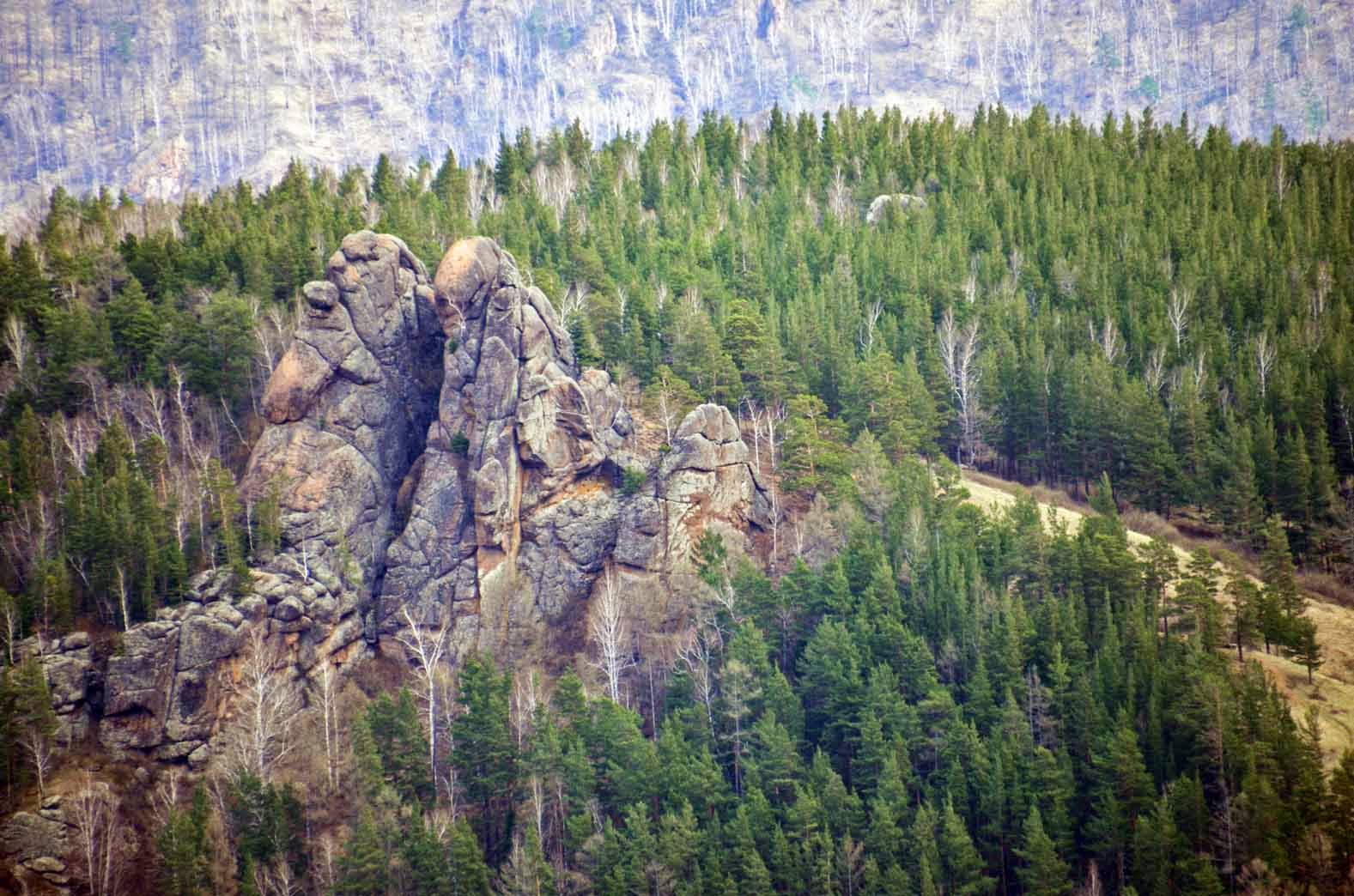 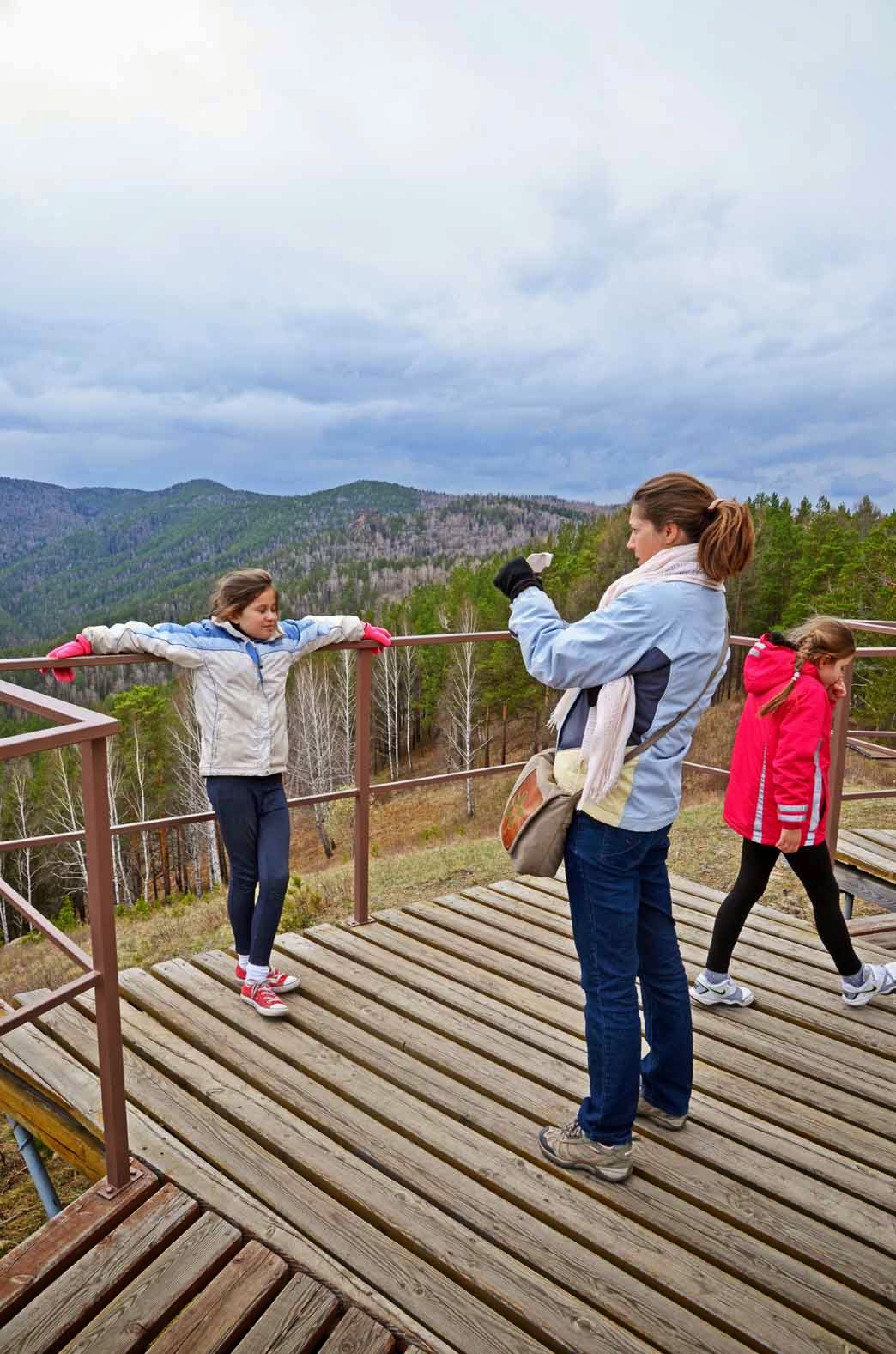 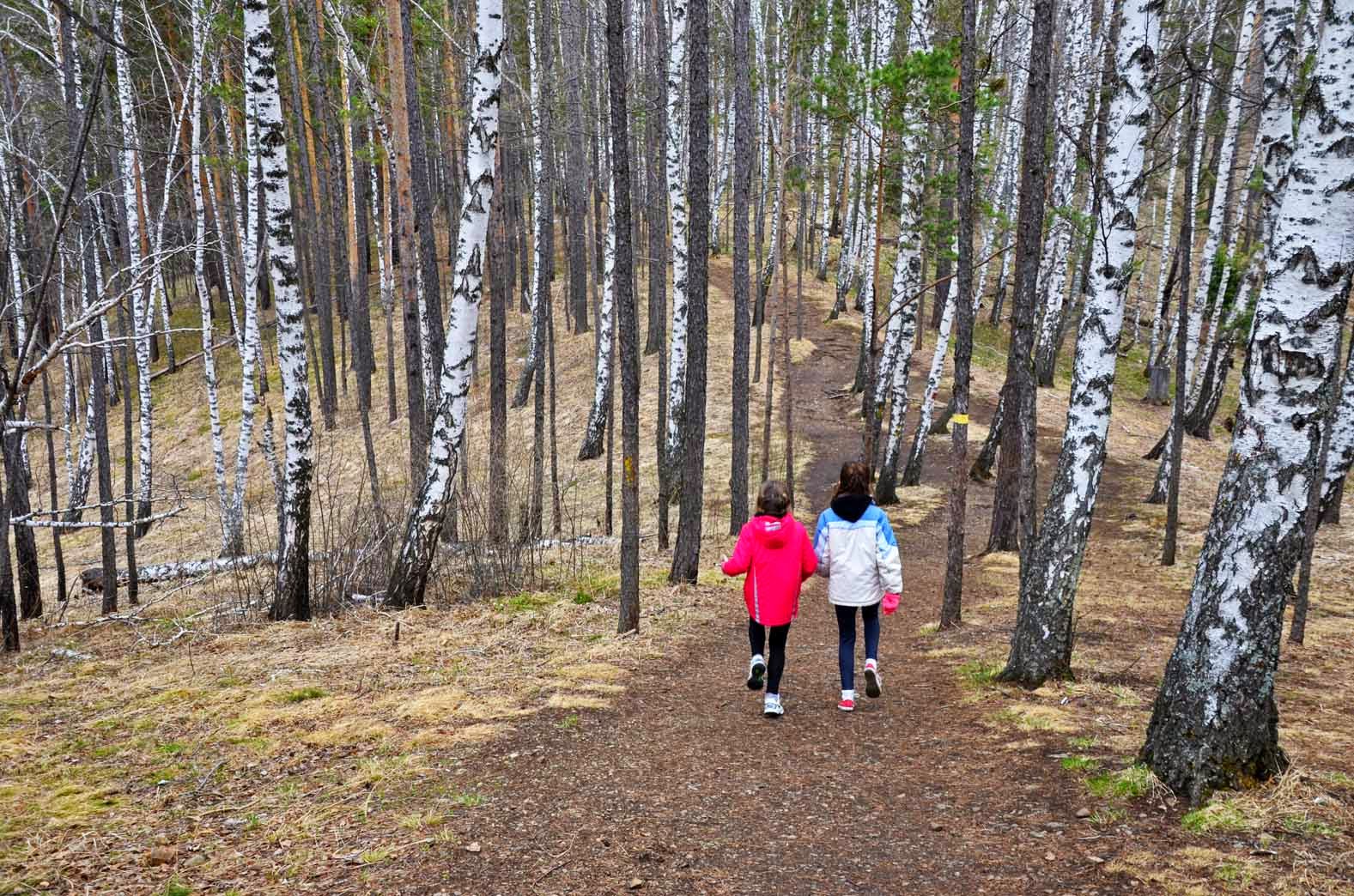 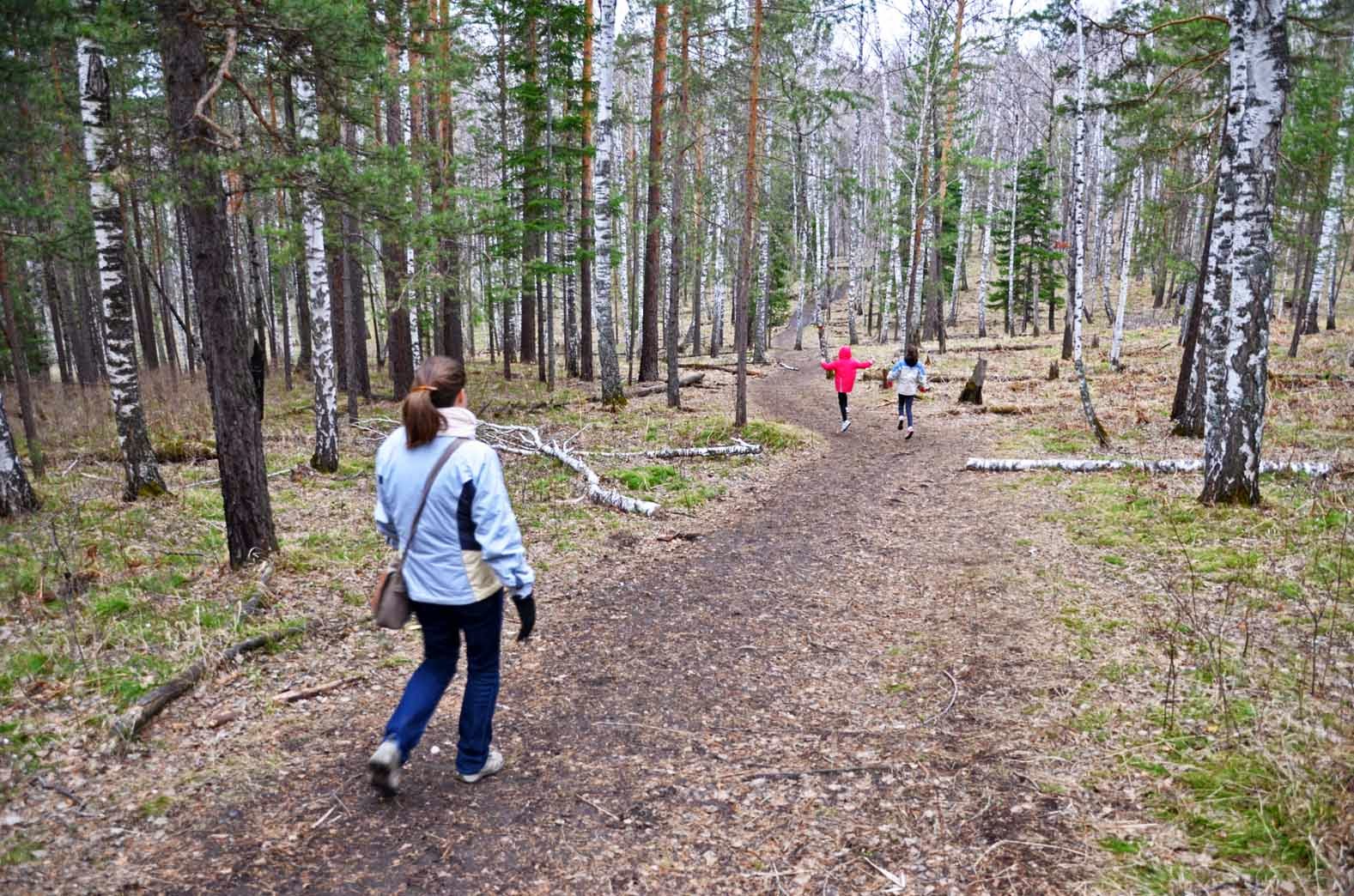 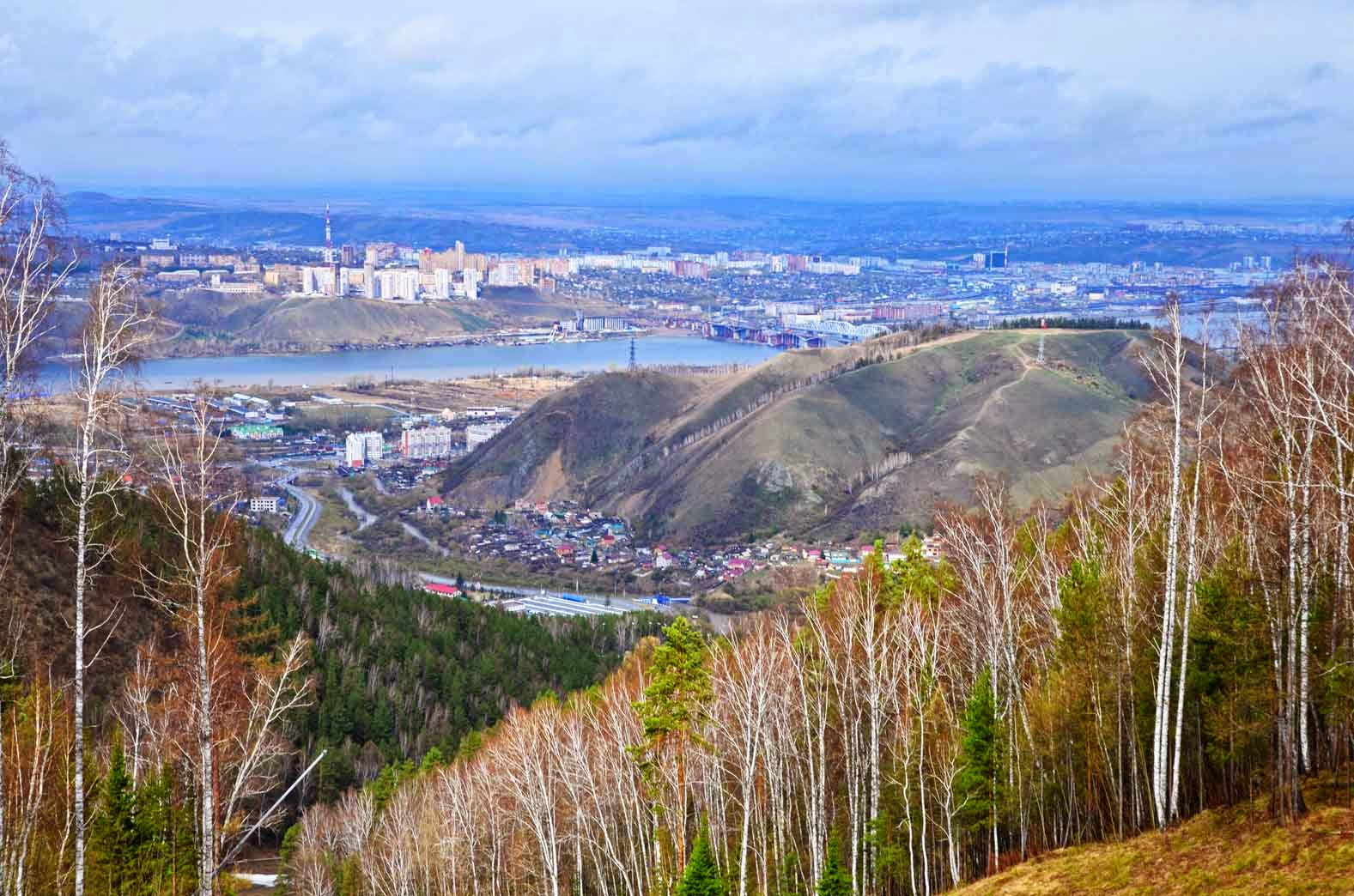 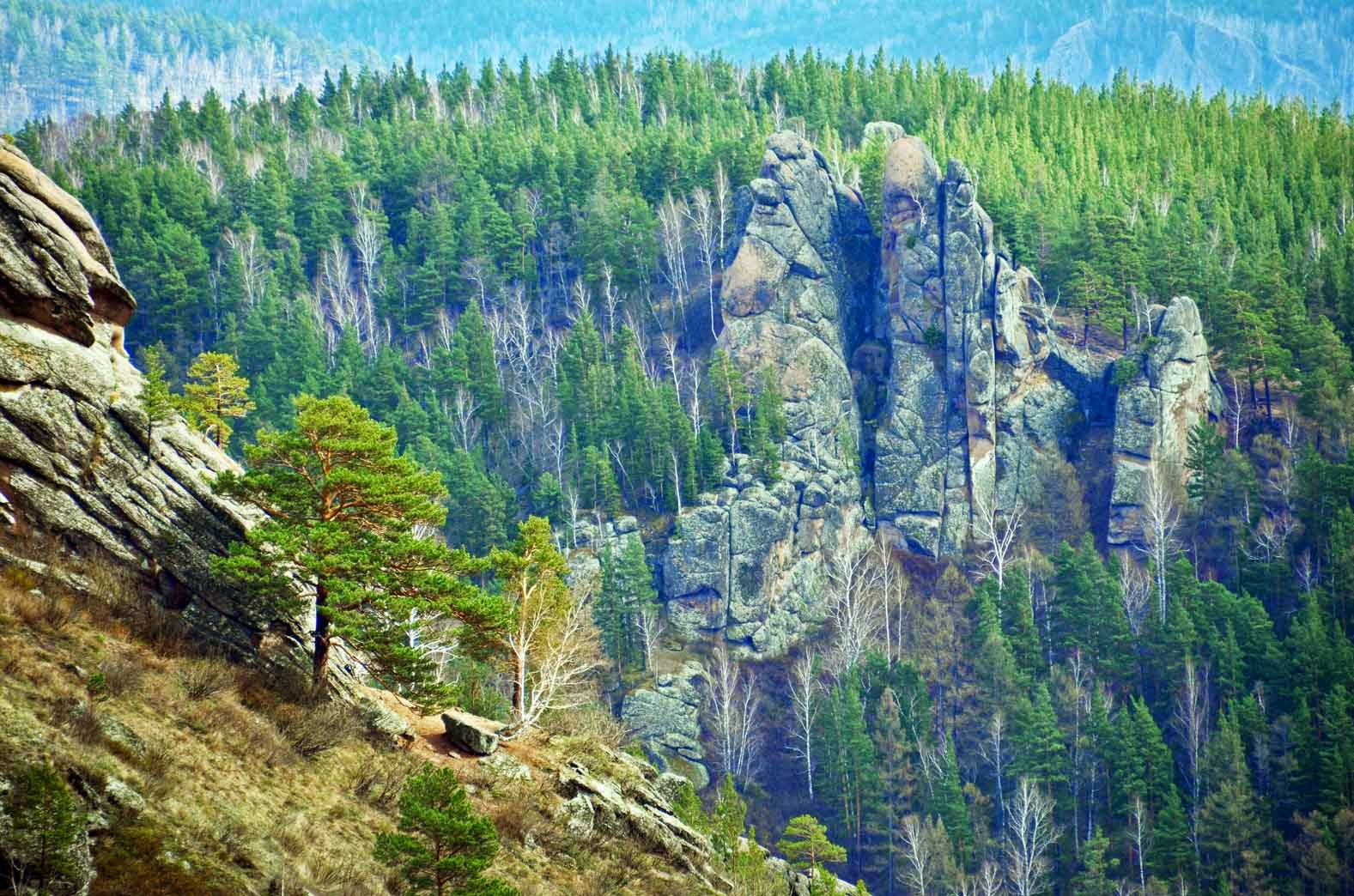 We then caught the chairlift back to the bottom and the bus back into town and stopped off for a few pelmeni (dumplings) at another cafeteria restaurant. As we wandered back into town, another bank of black clouds rolled in and as the first drops of rain started to fall, we ducked into a coffee chain outlet to escape what looked like a nasty downpour. Unfortunately, the coffee was horrible and horribly expensive, but by the look of the puddles outside when we re-emerged, it was probably worth it. 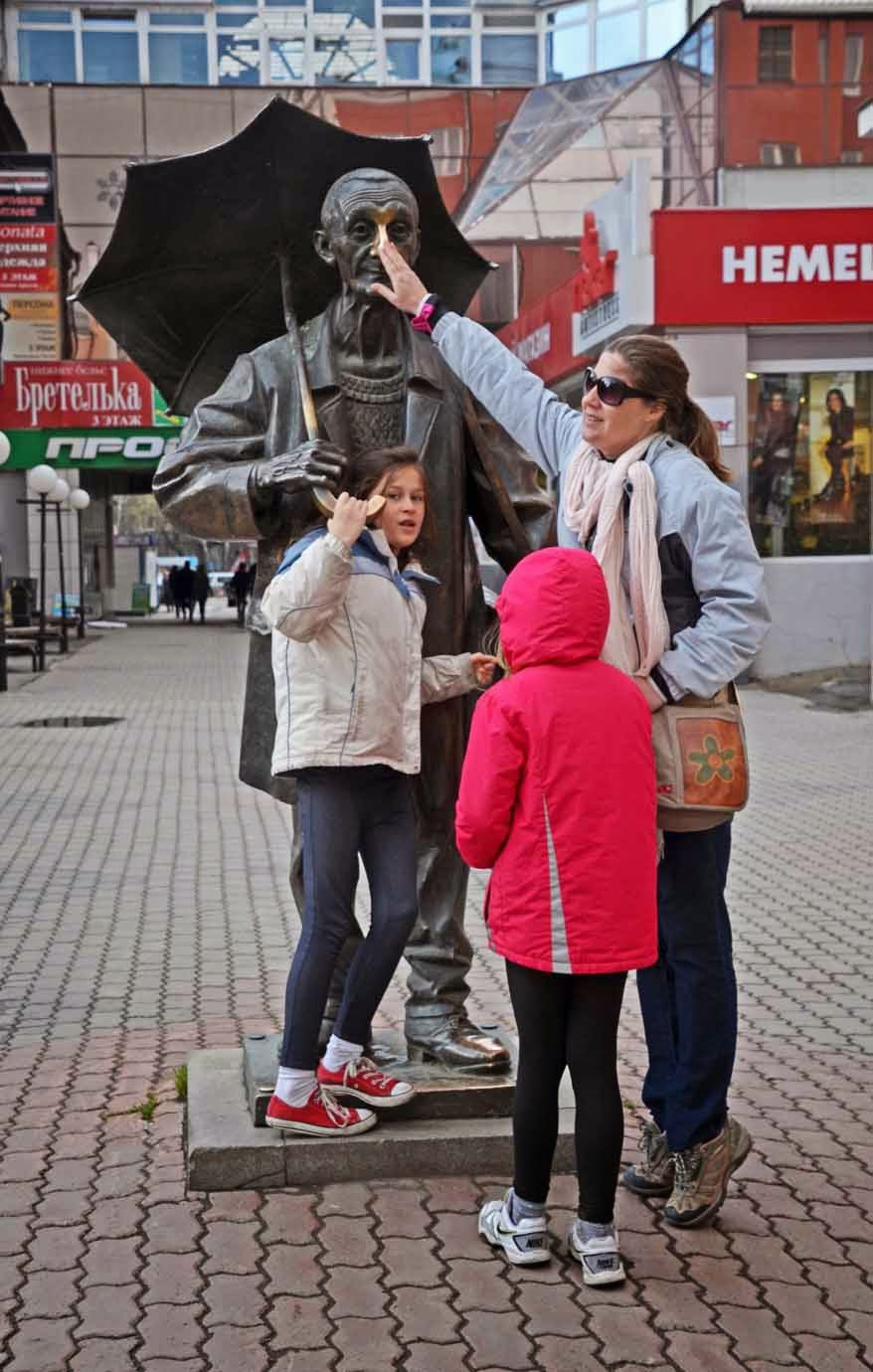 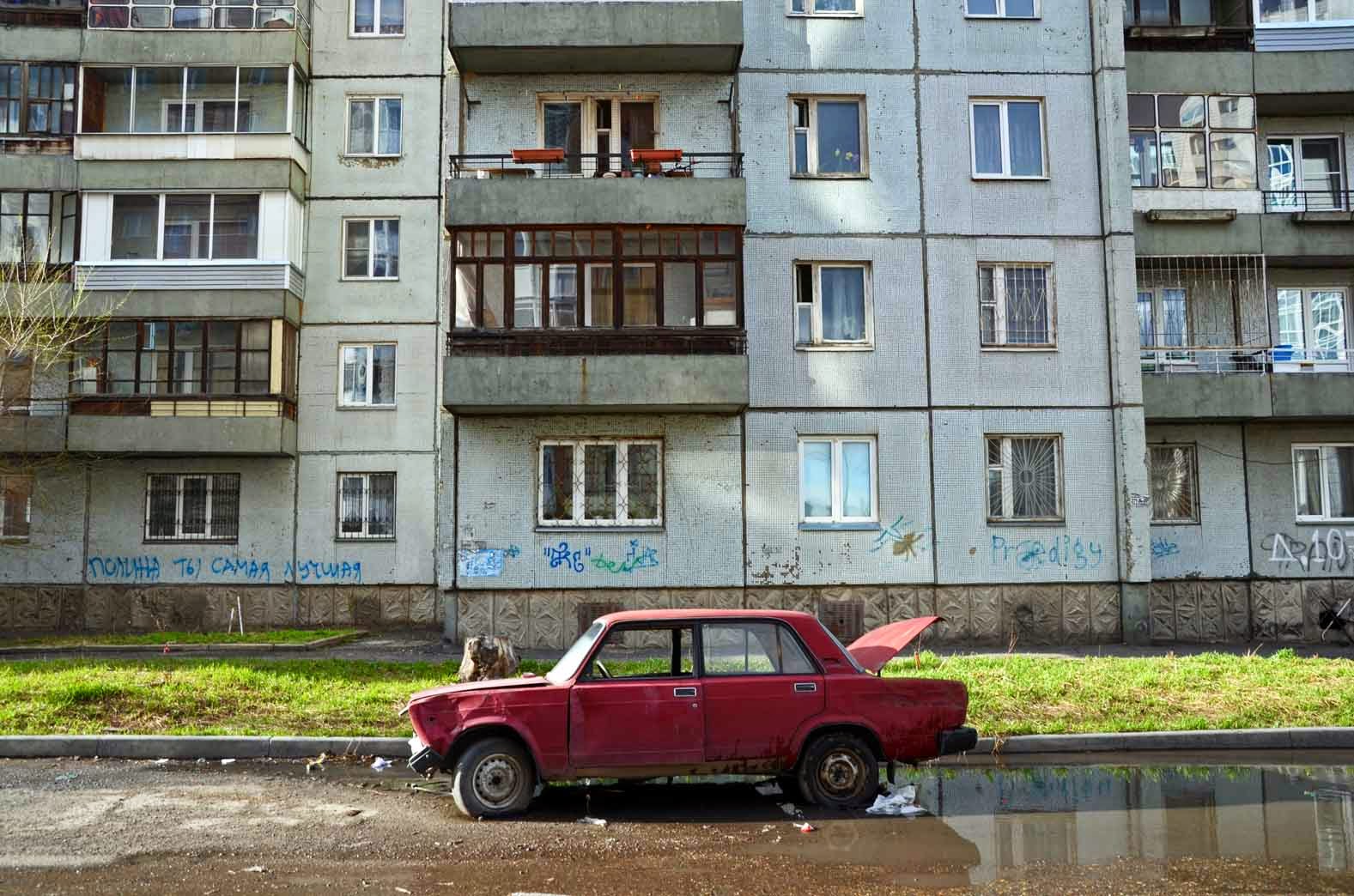 Back in our room, we surveyed our options for dinner and chose a place that was fairly close by. However, when we were on our way there, we changed our minds – opting for a trendier place that was about 40 minutes walk away. Unfortunately, however, we hadn't brought the details and were relying on our memory of where it was what it was called. Bad move. We spent I hate to think how long wandering around the streets looking in vain for the restaurant. Kate tried asking a few pedestrians but they just looked at her with frightened eyes and hurried off. 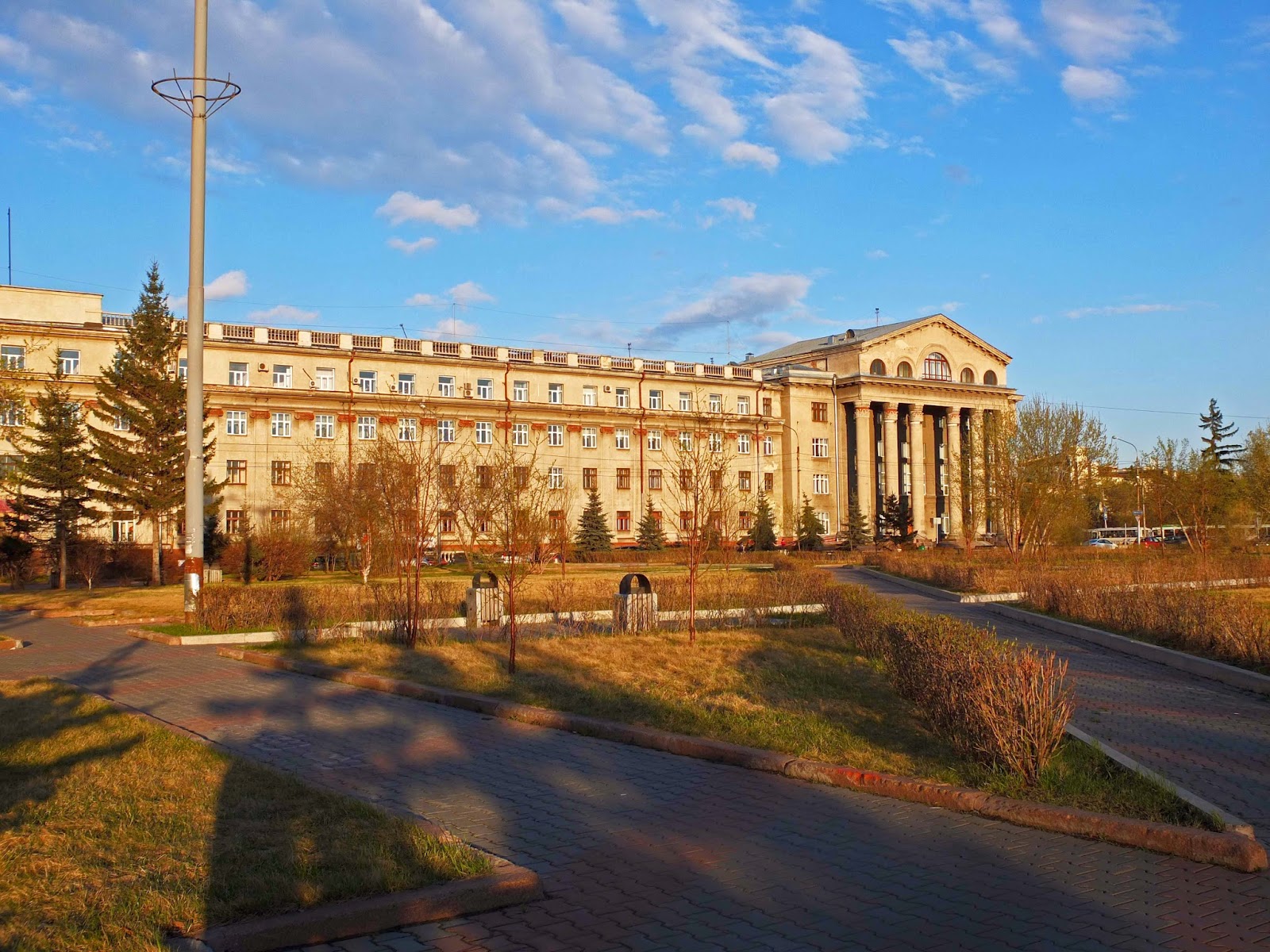 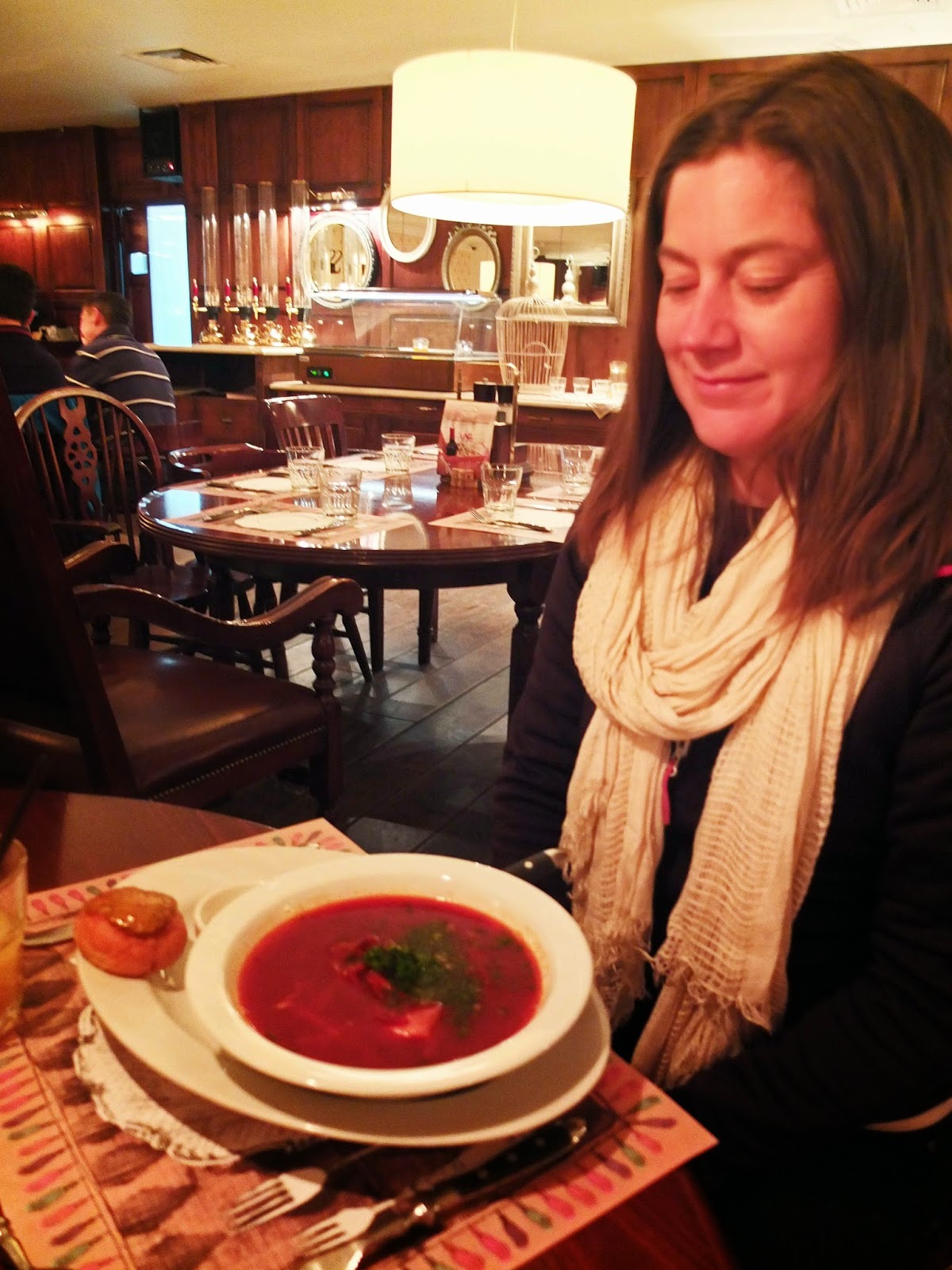 Thankfully, we still had the directions to our original choice, so off we trudged, eventually sitting down sometime after 9pm. The restaurant served traditional Russian/Siberian food - I opted for a venison steak (which I assume was probably reindeer) and Kate had borscht. It was a nice meal, but were all absolutely exhausted by the time we finally made it back to our room.
Posted by SGKZ at 08:06