In the morning we headed out onto the main street and bought some snacks and lunch ingredients from a convenience store for our day out at Penang National Park today. Then Kate took us to her pancake guy, off whom we bought a bunch of the lovely brown sugar and crushed-peanut pancakes, before we moved over to the fresh fruit juice guys, off whom we got some pineapple and orange juices in plastic bags. Kate and Zoe then went back into the little convenience store to get a few more snacks, emerging just as the bus arrived. The back of the bus was kinda full, so we took seats at the front – bad move. The front of the bus soon got extremely full and we all had to stand up to let old folks sit down, and were soon crushed up and swaying around as the bus made its way through George Town. In time, however, the passengers thinned out and we managed to get seats. 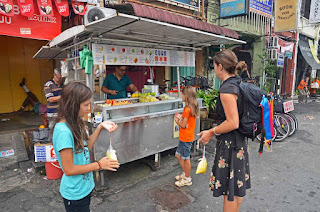 The bus terminated at the park, so we disembarked with some other tourists – the only other people left on board – and walked up to the entrance, where we signed in, and discovered that, disappointingly, the canopy walkway was closed. Heading into the park we quickly saw some long-tailed macaques – not our favourite animals – and then some langurs. A bit further on, we saw a small family of macaques approaching us on the path. After our experience in Khao Sok, Kate and the girls were understandably nervous at having monkeys so close, but they very nonchalantly walked past us with barely a glance in our direction. 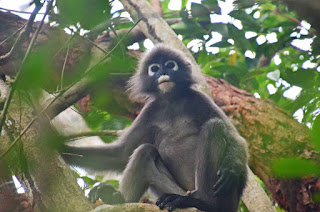 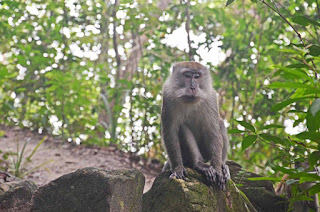 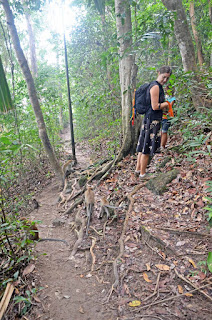 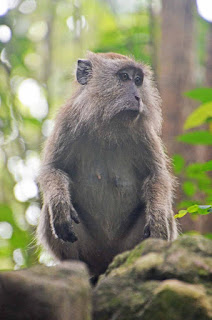 Not long after we emerged onto a long white-sand beach. Up ahead, I spotted a small monitor, and further down the beach we came across a much larger one lying flat out on the sand, soaking up heat from above and below. Shortly after we got back into the forest I noticed a flying lizard on a tree beside the path. Now I'm not at all proud of this, but as we're all (Sarah excluded) so desperate to see a flying lizard fly, I took the desperate measure of picking up a stick and getting the lizard so agitated that it eventually leapt off the tree and glided down to an adjacent trunk. Hooray! 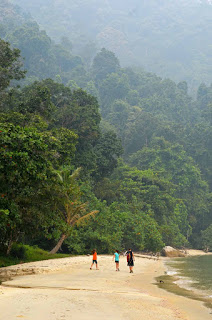 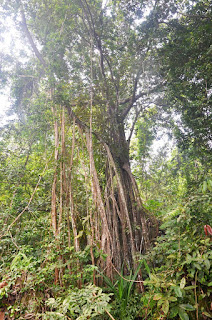 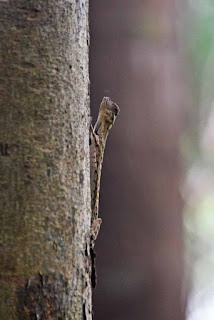 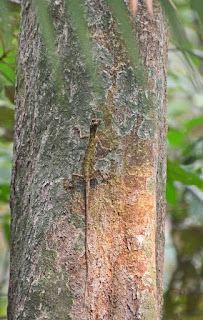 Soon after that, we reached our destination – the ominously named Monkey Beach. We looked around for any sign of marauding macaques but the beach, which was lined with a series of little shelters that had apparently once been basic restaurants, looked quiet, so we dumped our bags, stripped off and went in for a swim. It was extremely hazy today – the result of the fires currently burning in Sumatra – and although this seemed to keep the heat down, it didn't do anything about the humidity, and we were incredibly sweaty, which made a swim most welcome, even if the water temperature was, as always, far too high to make it properly refreshing. 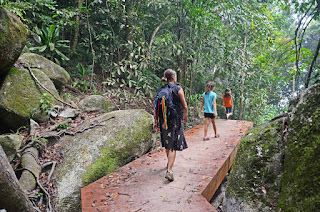 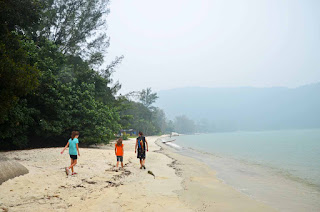 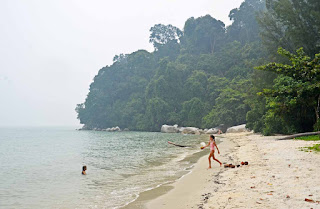 Kate was first out of the water and as she stood by the shelter where we had left our bags she was approached by a female macaque. I got out and scared it off and then set about making lunch (good old tuna and cucumber sandwiches) as the female was joined by a male – the pair sitting in a nearby tree and watching my every move. They eventually got bored and moved off down the beach, where they climbed up on a bench and began rummaging around in the bags of a guy out for a swim. I chased them off again, but they were soon back watching us eat our lunch. All the while, more and more monkeys were arriving, and by the time we had finished eating there must have been more than 30 monkeys around the beach. After lunch, I walked over to photograph a group sitting on top of a shed. As I got close, I heard a noise just to my left, looked down and saw a large male macaque, teeth bared, glaring up at me. A hiss to my right revealed another large male a few feet away, also in full bared-tooth glare mode. I slowly backed away a little and then ran at them, making a few hisses of my own and watched with some satisfaction as they scampered away. 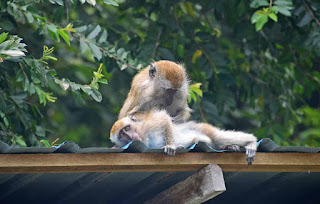 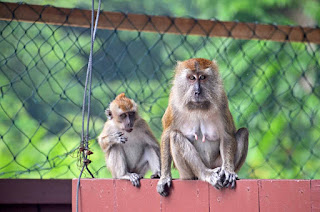 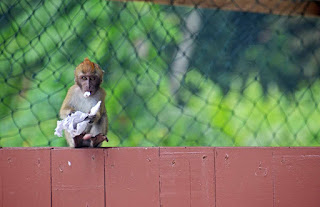 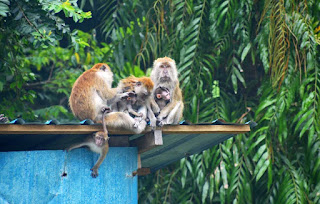 By now, boats had started to pull up at the beach, disgorging guides and tourists. A Muslim couple arrived just beside us, her in full burka, and their guide set about cooking them up a big seafood meal. Our initial plan had been to continue on up the hill to where an old lighthouse is situated, but we chatted to one of the guides who said that the main reason to walk up there is the view, of which there would be none today thanks to the haze, so we packed up and headed back towards the park entrance. After a while, a light rain began to fall, mingling unnoticed with the buckets of perspiration that were already soaking our clothing. By now we had run out of water, and had lost so much to our external cooling system that we were starting to get a bit dehydrated. So, we were elated when we finally arrived at the park entrance, walking quickly to the nearest kiosk and buying a big bottle of cold water, which didn't even last until the bus stop. 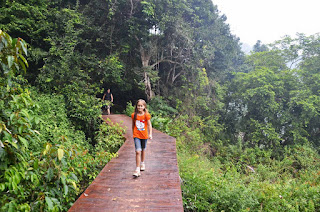 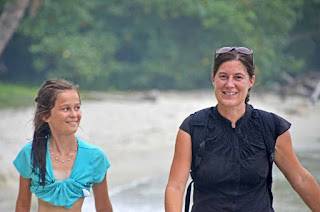 When we got back to the hotel we all had a shower and changed out of our skanky clothes, before heading out to the Monalisa Cafe and then to the funny little Indian restaurant that Sarah and I had bought our naans from last night. We ordered three naans, which were delicious, and a chicken curry, which wasn't, before moving on to Ho Ping for rice noodles, beer and pork buns, and then finally to Kate's lotus ball cart.. 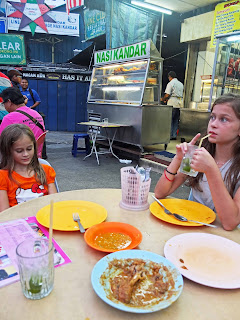 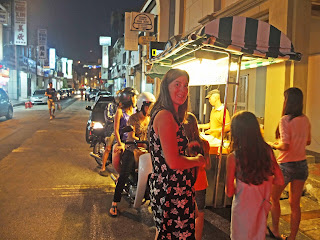