After breakfast we packed up and headed north again under grey skies, a light rain falling. Not long after we left, we drove past a large factory that helped to clear up a mystery for us. For some time, we had been driving past fields filled with a low-growing crop that we couldn’t identify – the presence of this huge sugar factory suggested that it was probably sugar beet.

Around lunch time, we stopped in the town of Moret-sur-Loing, which, as it’s name suggests, is situated on the Loing River, a tributary of the Seine. It was raining a little when we arrived, and we it was all a bit miserable as we walked the length of the town and back, through the impressive 12th-century stone gates that bookend it, and across the long bridge across the Loing. There we found a basic bar/tabac where we stopped for a coffee (which was so good I had a second). The town itself was also pretty basic but also quite pretty, with some lovely half-timbered buildings, several with some very intricate carvings in the wood, and two nice old mills on the river. It apparently acted as a source of inspiration for Monet, Renoir and Sisley (this connection is much trumpeted around the town), and Napoleon once slept there as well. 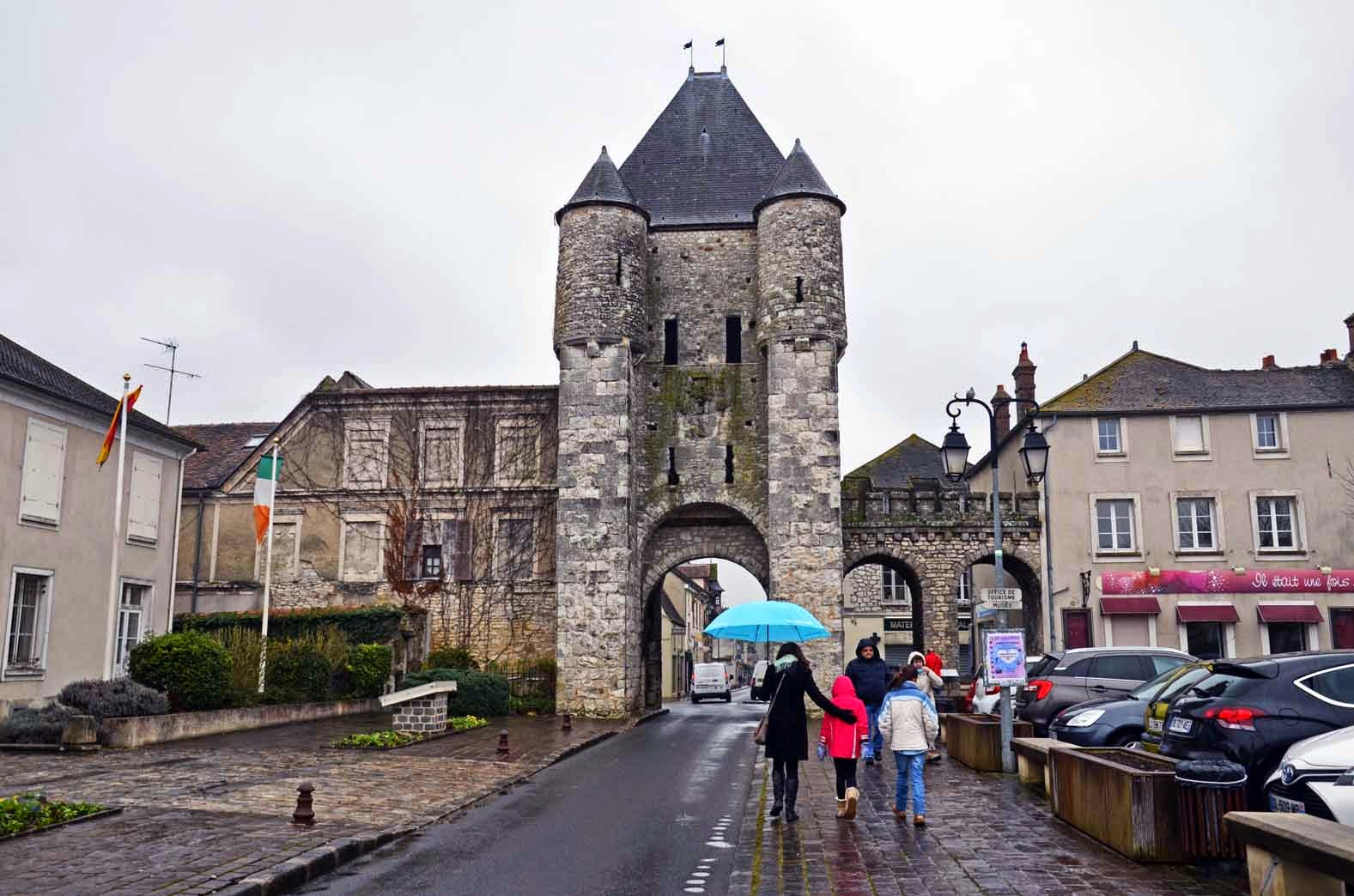 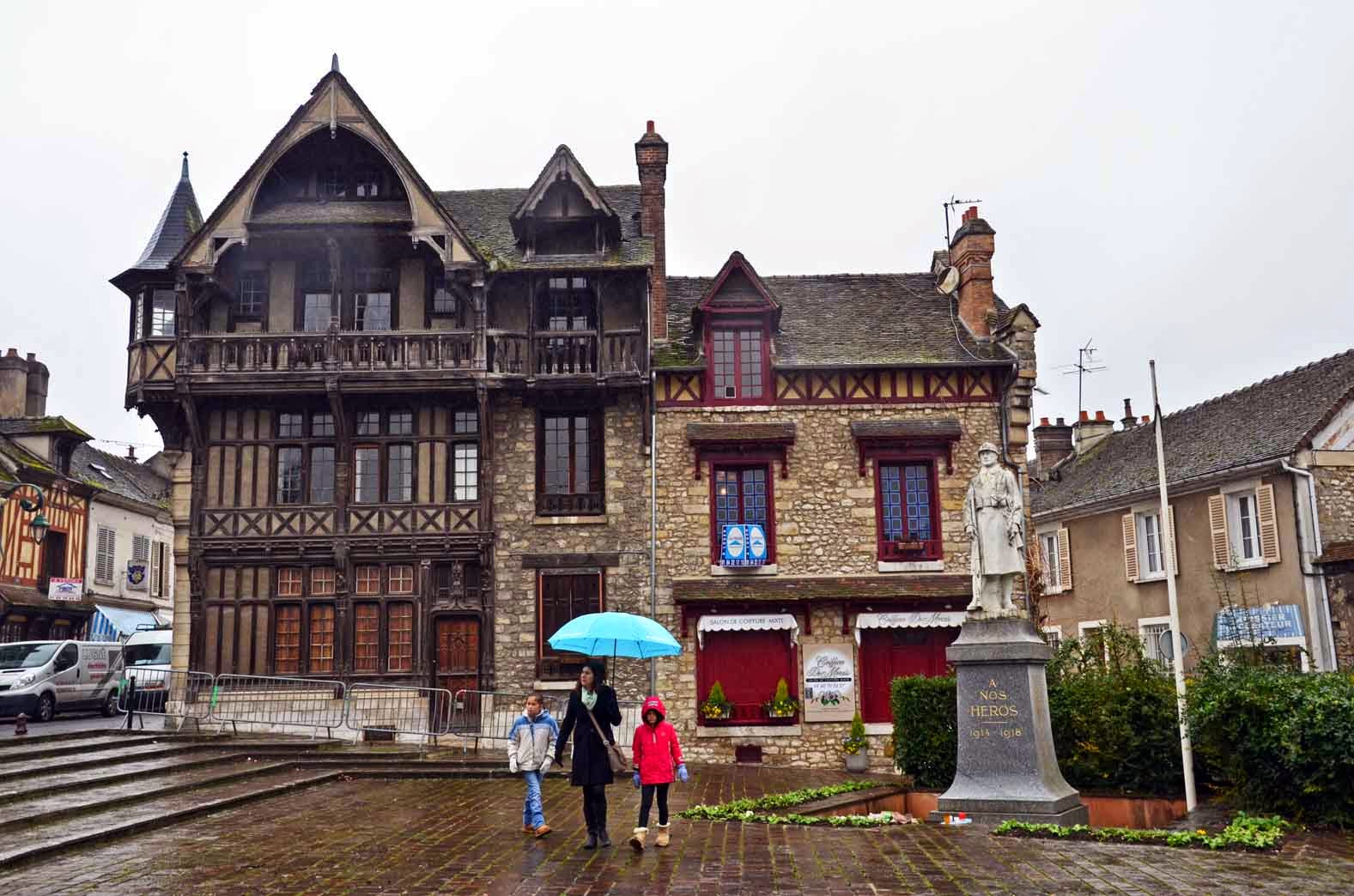 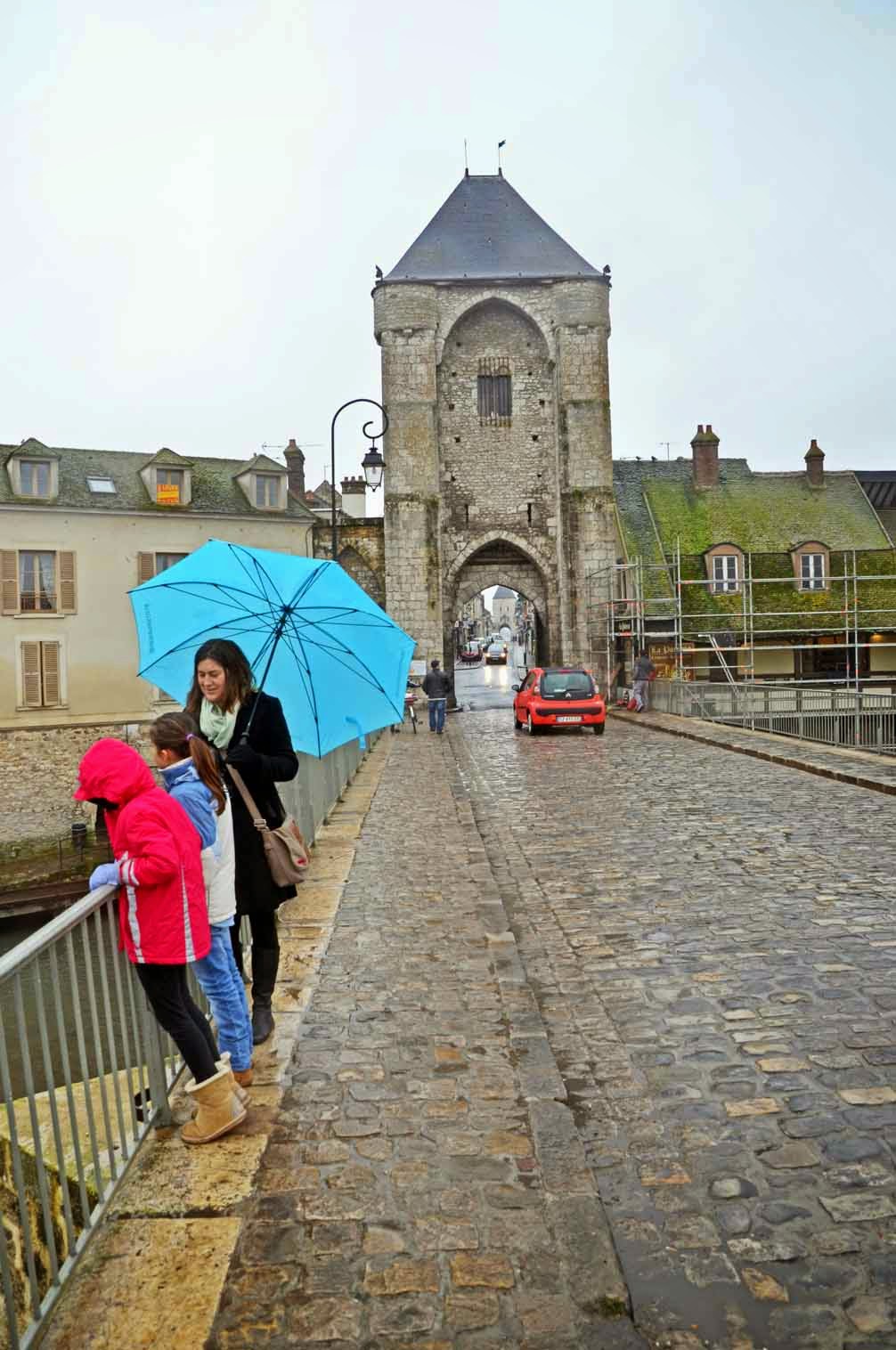 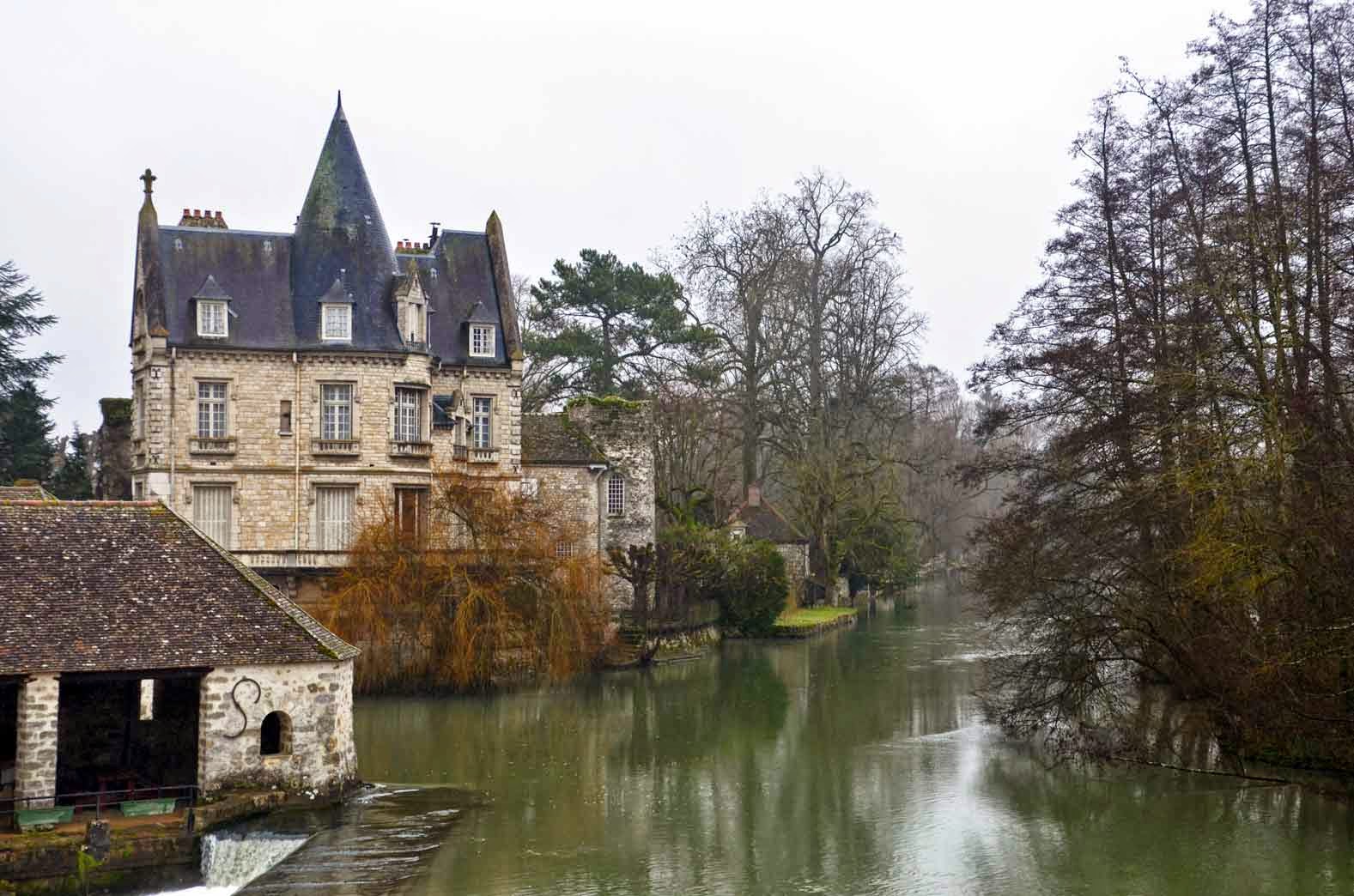 By then the time I had finished my second coffee, it really was lunchtime, so we headed back into town, returning to a rather sweet looking little bistro that we had spotted during our earlier reconnoitre. It proved to be particularly little – essentially just the front room of a house, with a husband-and-wife team cooking in a tiny kitchen right in the room behind the bar. There was only room for 18 customers to sit around five tables. The food was Alsatian, and we ordered three plates of the day – two of pintade (guinea fowl) with orange sauce and one of roast pork. As with our beloved Burgundian restaurant, the food was simple but deeply flavoured and perfect for the cold, grey day. 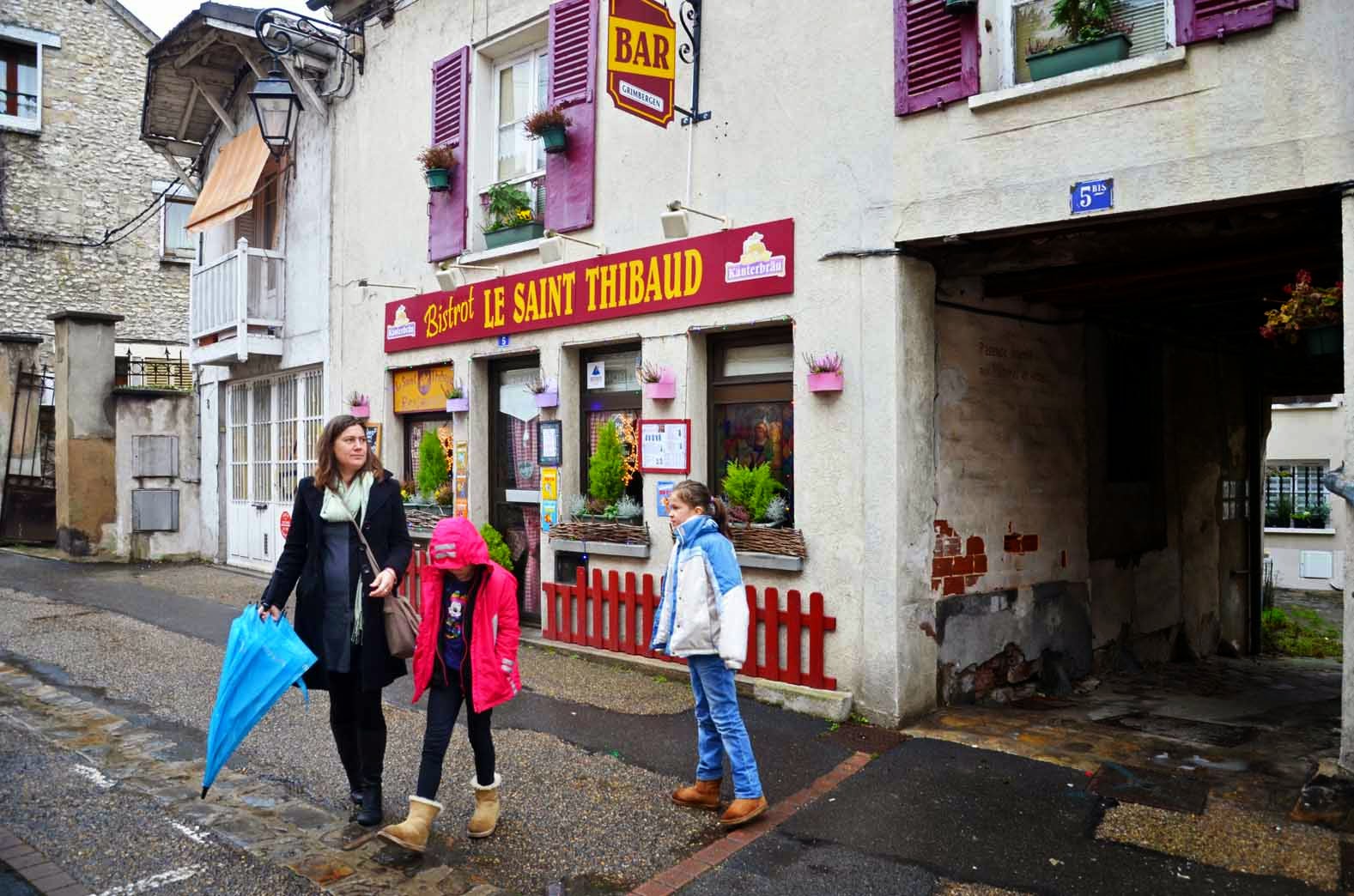 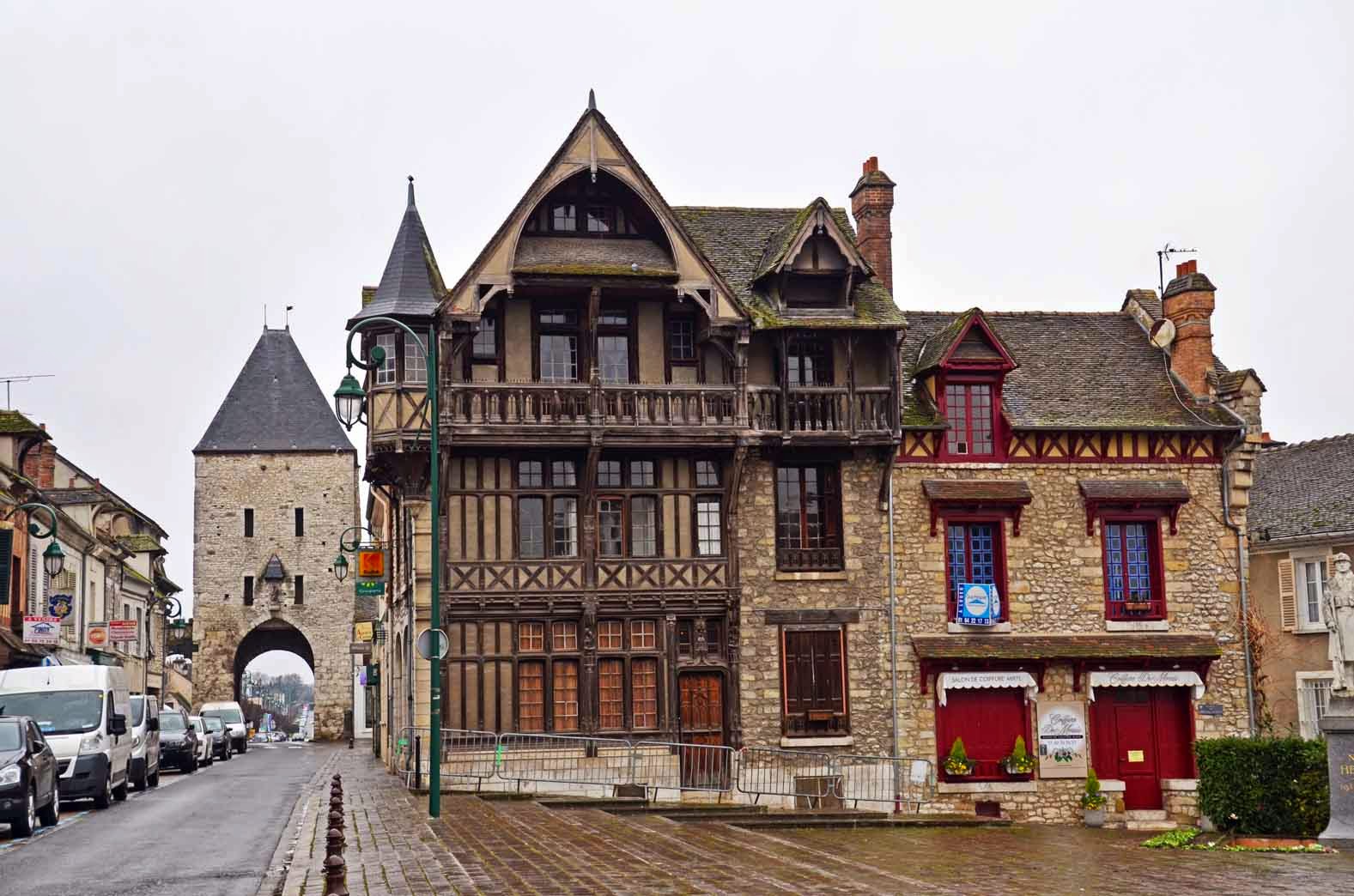 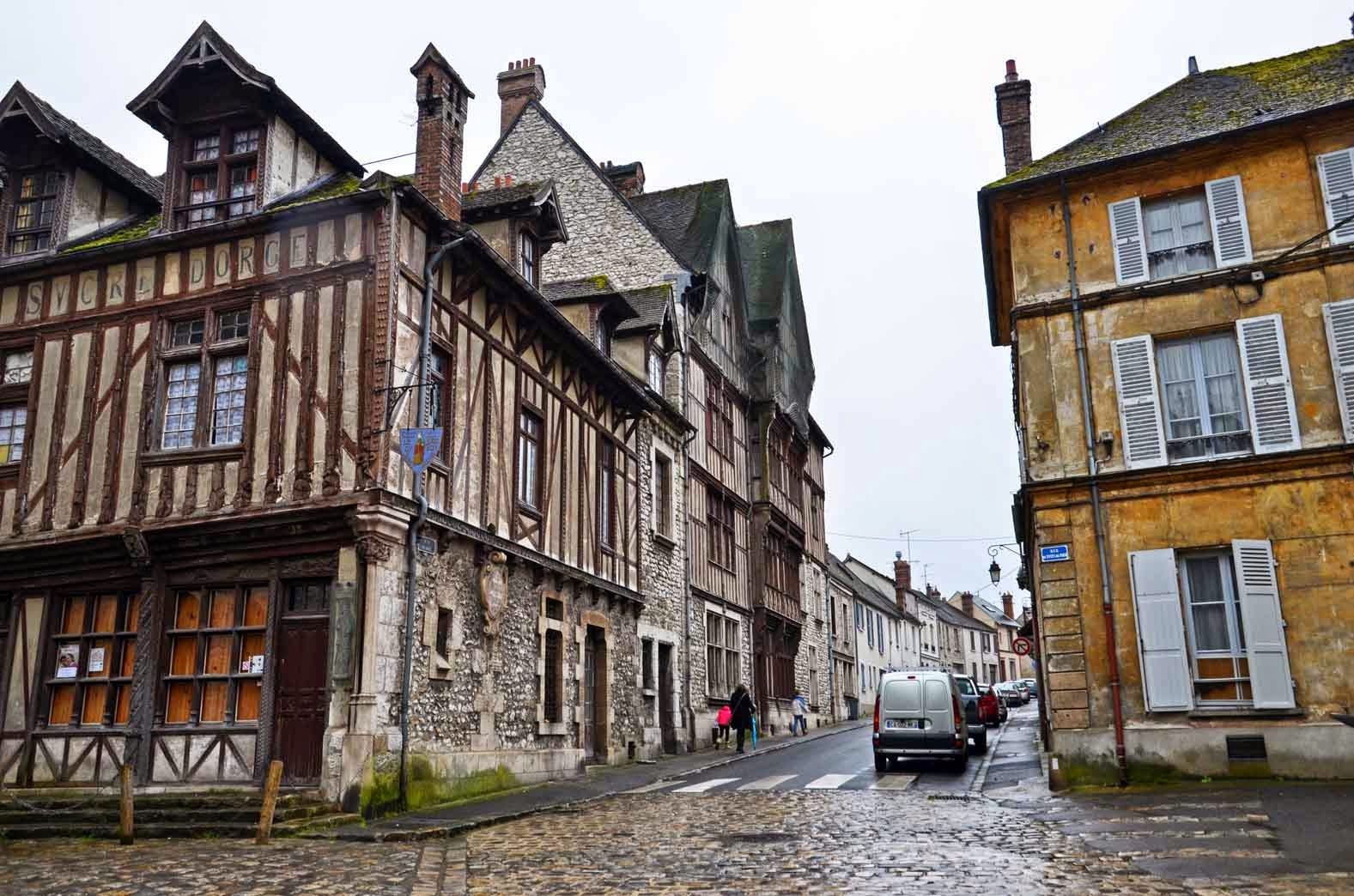 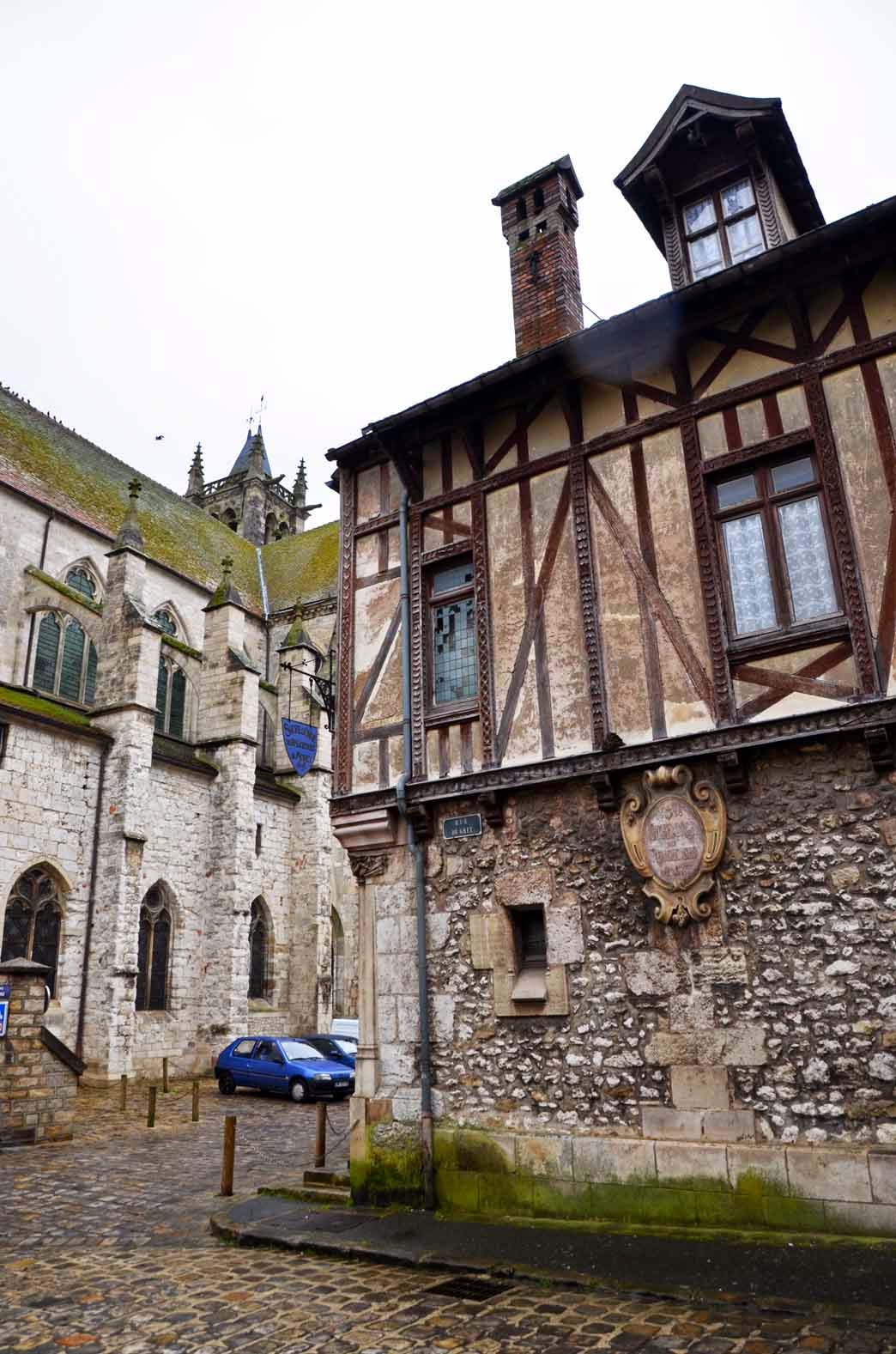 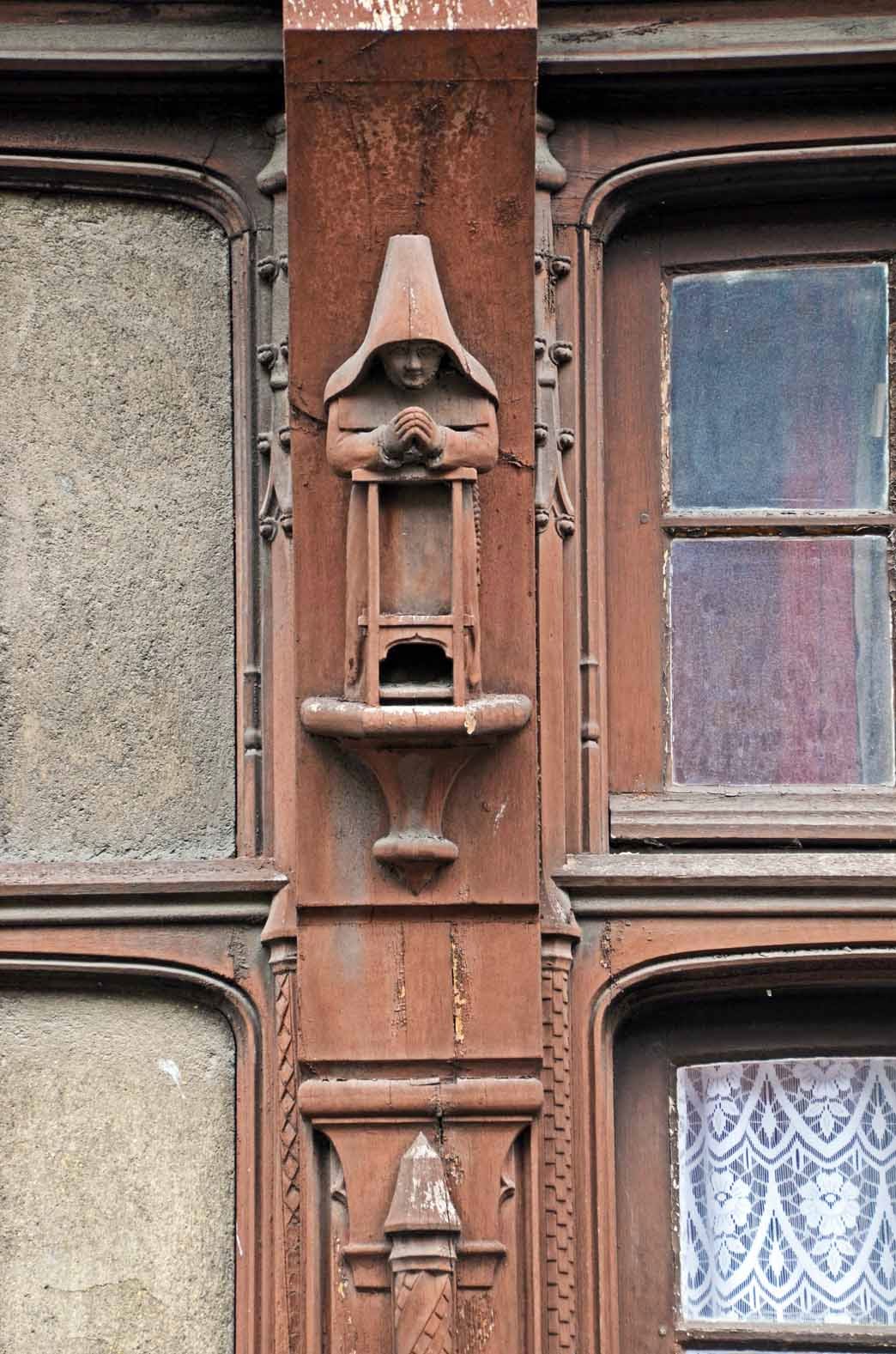 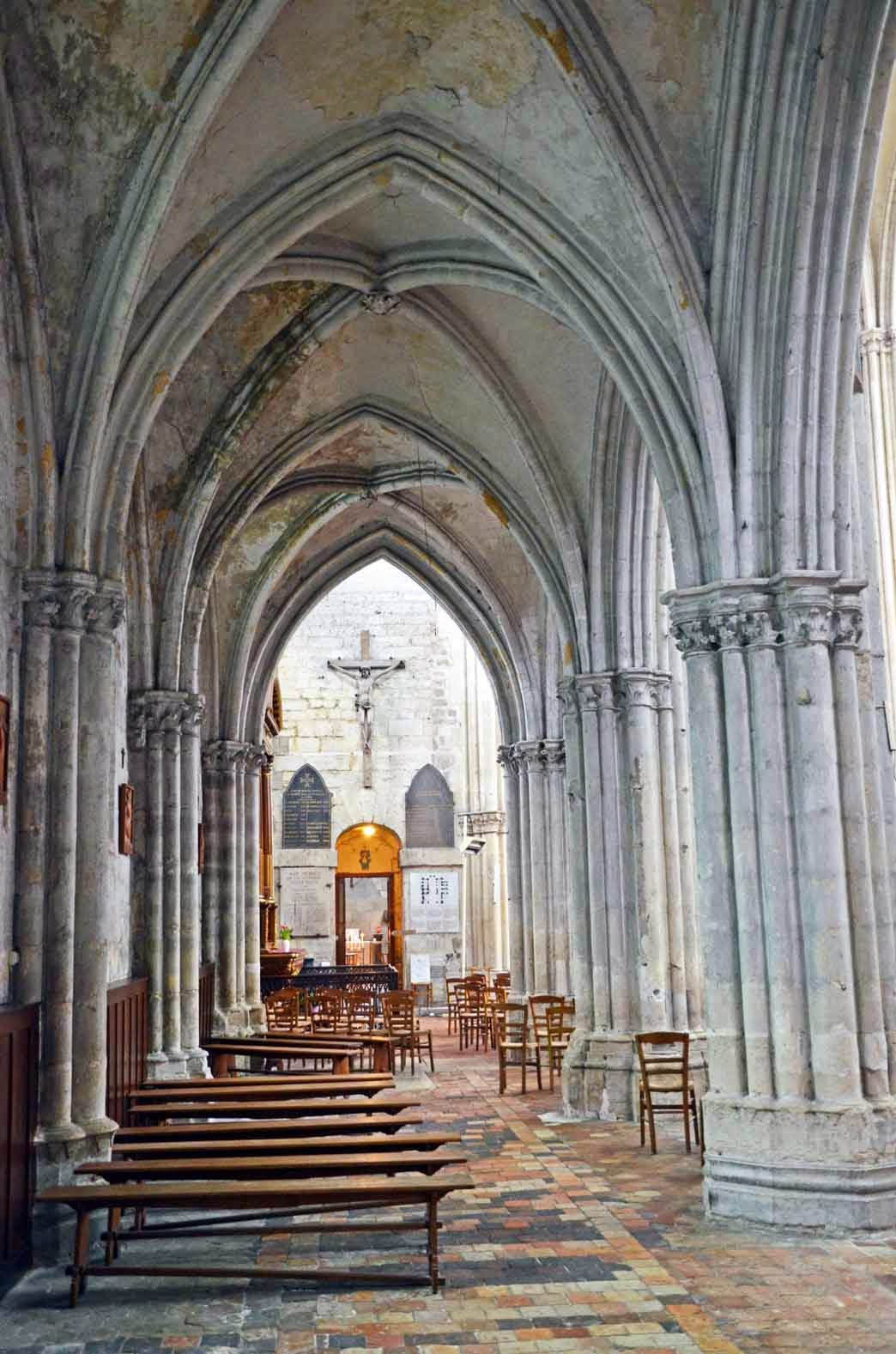 After lunch, we headed northwest, driving through Fontainebleau forest on our way to Paris. The forest looked lovely and we would have loved to get out to walk, but there were large Chasse en cours (Hunting in progress) signs everywhere, so we just kept driving.

Eventually, we arrived at our hotel in Marne-la-Vallée, home to Disneyland Paris. After checking in, we hopped aboard the shuttle bus and drove out to Disneyland, where there’s a train station. We caught the train into the outskirts of Paris, where we were met by Hugues, with whom Kate worked way back in her CSIRO days. He drove us to his apartment, where we had a lovely meal with Hugues, his wife Annick and their daughters Zoe and Sophie. Afterwards, Hugues and Zoe walked us back to the station, and it was back on the train and back to the hotel.
Posted by SGKZ at 22:20