In the morning, we walked into town and had a breakfast at Le Tokae. Afterwards, while the girls and I sat at the table, Kate went off and checked out the options for getting a bus up to Laos, and after we had paid for the food, we walked up the road and bought some tickets from a nearby restaurant and guesthouse. Rather worryingly, it took the girl three goes to get the tickets right, filling in the wrong destination, the wrong date and then not ticking the boat box for the transfer over to the Mekong island that we're planning to stay on (we should have taken this as an omen – more of which tomorrow). We then walked up the road a bit further and hired a tuk-tuk to drive us up to see the Irrawaddy river dolphins. Although classified as vulnerable worldwide, 90 per cent of the remaining population of these dolphins is found in Bangladesh and the other populations are all classified as critically endangered. The Mekong population is down to fewer than 100 individuals, with a small group of about 15-20 living about 20 kilometres upriver from Kratie. 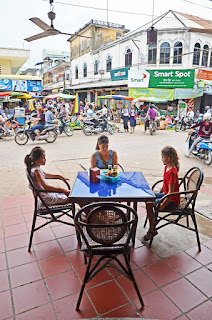 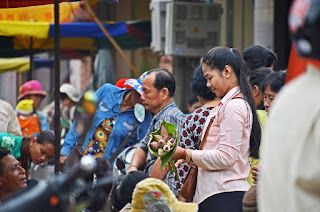 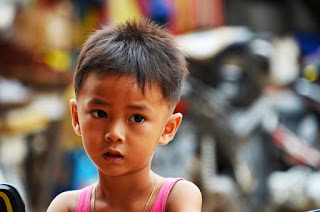 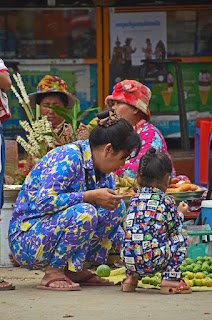 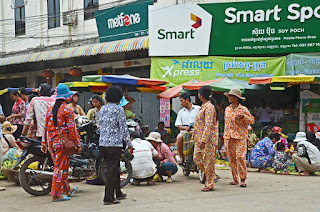 When we got there, we paid the $26 fee and walked down to the river, where we all climbed into a waiting boat, which took us out into and across the strong current. There were small clumps of vegetation in the river, among which large white egrets hunted, their sinuous necks poised ready to spear their sharp yellow beaks down at passing fish. We headed for an area of slightly slacker water on the other side of the river where a couple of boats were already parked. As we approached them, we saw our first dolphins – dark grey, bulbous shapes parting the milky-coffee-coloured water and then curving back down again, a small fin rising from the water and then disappearing back under it. They surfaced both singly and in groups, letting off an explosive exhalation followed by a longer sigh, a bit like someone clearing a snorkel. The dolphins are obviously restricted to quite a small area of the river – apparently they need particularly deep pools to swim in - and we watched them move from place to place, our driver following at a safe distance. Taking photographs was difficult as predicting where the dolphins would surface was nigh on impossible and the window of opportunity that opened as they surfaced shut quickly as they dived again. When our allotted hour was up, the boat took us back to the pier and we got in our tuk-tuk and went back to Kratie, getting the driver to drop us off at the hostel. 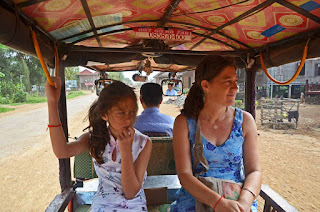 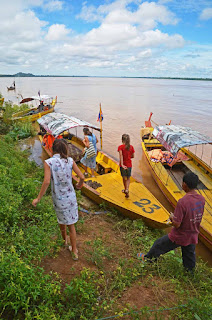 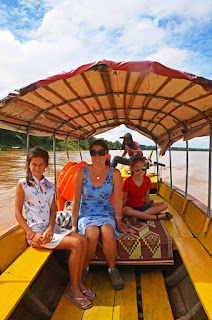 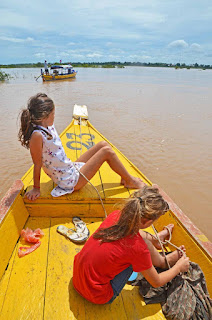 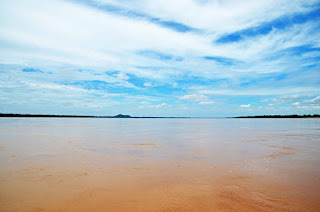 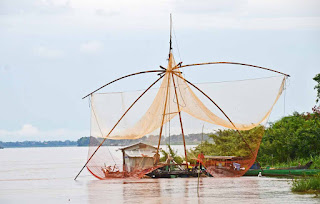 From there, we walked up to a very local restaurant on the corner. The staff looked quite surprised to see a group of white folks sitting down, but they had an English menu and we managed to order a few dishes. The food was pretty good, although the chicken with lemongrass, while very tasty, came with the boniest bits of chicken I have ever eaten. The restaurant did a sideline in hideous figurines and furniture carved out of beautiful pieces of rainforest hardwood and as we finished our meal, we watched in fascination as a Cambodian family began haggling over a few choice pieces. It was all slightly odd – we were eating in a very local, very cheap restaurant, but parked outside was a Porsche (admittedly a slightly battered Porsche) and when the family patriarch finally beat the restaurant staff down to an acceptable price, she pulled from her pocket an enormous wad of $100 bills. This was something we hadn't seen too much of on our journey – serious local money.

After lunch, we walked into town and down to the pier, where we waited for the little ferry that would take us across to Koh Trong, the large island in the river opposite Kratie. When we got there, we walked up the path to where there was a small bicycle-hire shack and picked out two bikes. The girls then hopped on the wire racks at the back and off we went. We started out on a narrow concrete path, which Kate and I both wobbled off a few times as we tried to make way for the motorbikes and scooters and horse and cart with which we had to share it. After a while, however, the concrete ended and we were on a dirt track that obviously turns to deep mud in the rain, with some areas sculpted into ruts and waves now baked rock-hard in the sun, making for quite a bumpy ride for the girls. The path took us past a more manicured microcosm of the sort of rural countryside we've been driving through on the mainland – here the houses were a bit less hovel-like, with actual gardens full of flowering plants around them, the fields were well tended and the cattle well fed. We stopped frequently to let the girls' backsides recover but were still all the way around the island in about an hour or so. When we git back to where we had started, I managed to ride straight past the ferry pier – distracted by the temple on the other side of the path – but luckily, I recognised a sign we had passed earlier before we had gone too far, realised my mistake and headed back. After dropping off the bikes we walked down to the pier and watched the ferry fight with the current as it made its way across to us. When it docked, we climbed aboard and took seats near the front. 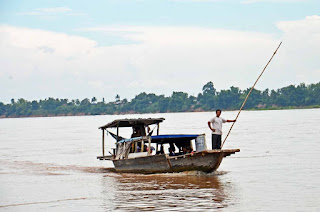 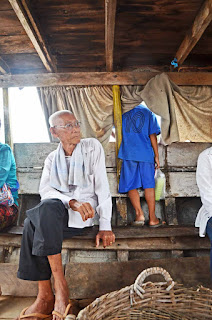 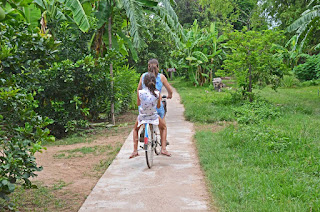 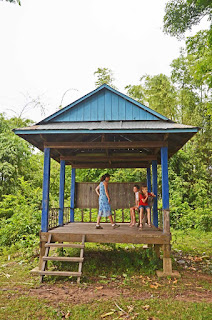 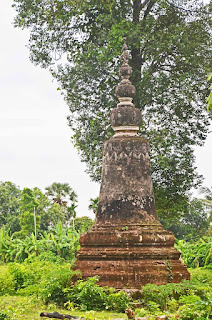 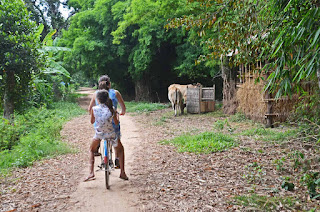 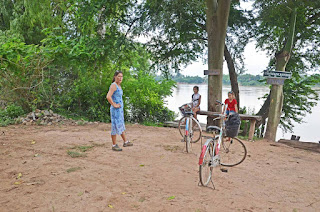 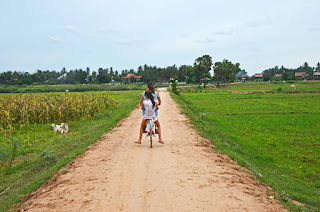 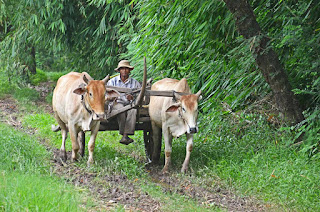 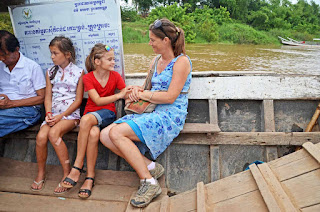 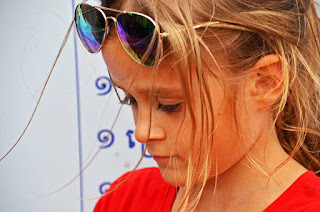 As we waited to leave, a man arrived with a small girl on an IV drip, the bottle of what I later learned was probably dextrose attached to a piece of bamboo that he held aloft. This is something we've seen a lot of in Kratie for some reason. Everywhere you go, you'll see people travelling around with IV drips attached to their arms – children, adults, walking, riding motorbikes, in the back of bullock carts. We're at a loss as to why they're so prevalent here, but it really is a distinctive feature of the town. 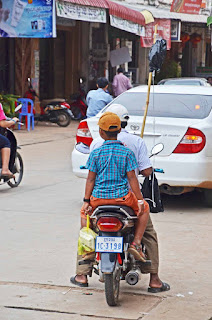 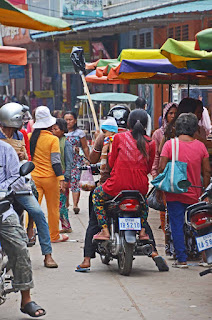 When we reached the other side of the river we walked up the bank and into town. We decided to check out the covered market, and managed to find Sarah a new pair of shorts. Back outside, we bought some dragonfruit for tomorrow's journey up to Laos and some grilled pork for this afternoon's journey across the road to Le Tokae for some beer and chips and cards (and grilled pork). Then, as the sun began to set, we walked back to the hostel, where we had dinner in the restaurant, marking the conclusion of our Cambodian adventure with the bottle of Australian Shiraz we liberated from Song Saa. 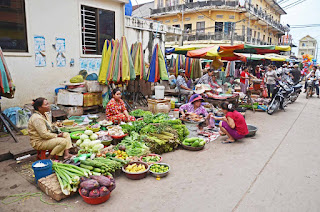 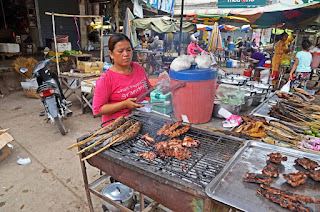