In the morning, I went outside to the ATM I had spotted last night and withdrew one last 100 kip note to cover our tuk-tuk ride to the border. Then, at 7.30am, we hopped into the tuk-tuk and headed off. Just as we arrived at the border the heavens opened up and rain began falling in sheets. We sailed through Lao border control – big sigh of relief – but as we were walking through to the other side, Zoe suddenly stopped and just sat down on the floor. While Kate and Sarah seem to have mostly shaken off their flu already, Zoe is still clearly struggling, and we helped her over to some seats, where she lay down on my lap. Kate then bought some tickets for a shuttle bus to take us over the Mekong to the Thai border post, where we filled in the necessary forms and then walked up to the booth, feeling no small amount of trepidation after our last border-crossing experience getting into Laos. As our Myanmar visas are in our British passports, we were trying to enter on them, and our hearts sank when the official began riffling through my passport, obviously looking for the Laos exit stamp. I explained that our stamps were in our Australian passports and he just nodded – he didn't even bother to check them.

When we got out the other side, I visited the one and only ATM to get some Thai Baht, but it wasn't working. I managed to get a lift to a little market/shopping centre nearby, but the one and only ATM there refused to hand over any cash, so I walked back to the border and changed some of our US dollars. I then remembered that we had been carrying around what I thought was a 50 baht note, which had been left over from our trip to Cambodia 13 years ago. However, it was plastic, while the notes I had just been given were all paper, so I pulled it out and checked with the money changer. He confirmed that it was indeed a 50 baht note, but it was the only plastic note I saw in Thailand, so I'm not quite sure what was going on there.

Finally cashed up, we bought some tickets for a minivan to Chang Mai. We were impressed and relieved that they were only about 240 baht (about $8) each and even more so when we discovered that we had the van to ourselves – our own private chauffeur-driven transfer. After we had been driving for a few hours we stopped for some snacks and were so amazed at the low prices we stocked up on chips, ice blocks and soft drinks. A bit later, we stopped for lunch at a little 'tourist resort'. Overhead were some incredibly impressive black clouds. We ordered some food, which was also extremely cheap – about US$1.60 each for a dish of pad Thai and a chicken and basil stir fry – but not very good (the former was extremely dry and the latter tasted to me like dirt). Sadly, the beer was a lot more expensive than we've been used to. 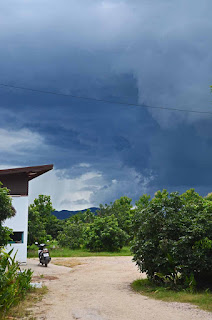 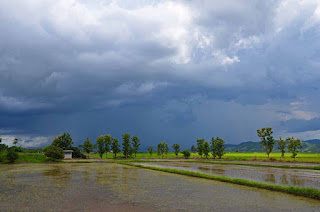 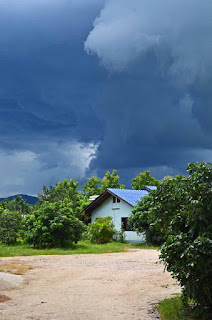 When we hit the road those black clouds dropped their loads all at once and we drove through some very heavy rain, but by the time we got to Chang Mai it was sunny again. After we had grabbed our bags from the van and piled them on the pavement I walked around trying every ATM I could find but they all just spat my card back out at me. I finally tried Kate's card and it worked fine – it later transpired that HSBC had blocked mine because I had tried to use it in two countries in one day. We flagged down a tuk-tuk – in this case, a quite fancy utility vehicle with a covered area with bench seats in the back – and drove to our hostel. As accommodation in Chang Mai is on the expensive side, we had opted for two double rooms with fans, but they turned out to be airless concrete boxes that caught the afternoon sun, so they were absolutely baking. We didn't hang around, making the short(ish) walk into Chiang Mai's 'old town'. We walked past the central market and numerous hostels and massage parlours and into a slightly more 'local' part of town. Here we came across a big, basic restaurant and got some really good stir-fried rice noodles and a couple of beers. We then explored a little further, looping back around to the main road, where we found another pretty basic restaurant with seating in the road and two women cooking the meals in a trolley beside the pavement. We had a really good green curry and some nice stir-fried Chinese cabbage and rice, and then ambled back to the hostel. 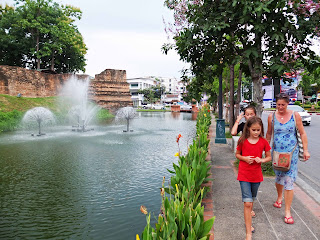 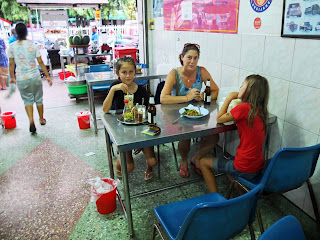 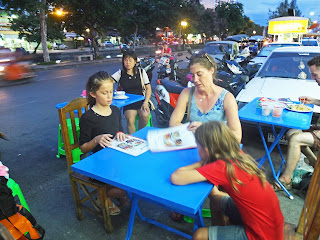 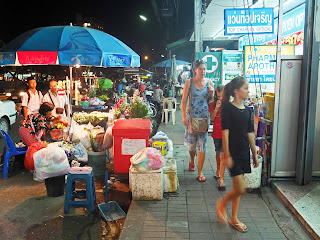