We all slept in as long as we could this morning, eventually getting kicked out of our beds by the train attendant, who wanted to turn them back into seats. A bit later, the train pulled up at the border, where we all got out, with our bags, to take our turns jumping through the immigration hoops – both Thai and Malaysian. The process went wonderfully smoothly for us, and before long we were back on the train looking out the window at one of our fellow passengers, for whom the process was going much less smoothly. We had all clocked this guy earlier, as he looked distinctly odd. Tall, thin, white, reasonably young, bald (perhaps even hairless, although his hair was growing back), he was dressed in a matching outfit of loose top and trousers – could easily have been something a patient would wear in a hospital. We could see him inside, talking and gesticulating animatedly with a woman we assumed was from Thai immigration (she wasn't wearing a headscarf and they seemed to be at the Thai end of the building). She appeared to be pointing back the way we had come. He didn't seem to be losing his cool – indeed, he seemed to be resigned to his fate, and sure enough, as the train pulled away from the platform, he wasn't on it. (We later quizzed some of the other people on our train but no-one knew what was going on – my best guess was that he was trying to skip out on some unpaid hospital bills.)

When we finally arrive in Butterworth, we walked up from the platform into the station, looking around in vain for an ATM and directions to the ferry terminal for the boat across to George Town on the nearby island of Penang. Kate asked one of our fellow passengers, a local man, for directions to the terminal and he very helpfully showed us to a free shuttle bus (all of the other white folks walked over). When we got there, we again looked in vain for an ATM, which then presented us with a problem – we had no local money and no source of local money to pay for our ferry tickets.

One of the ferry staff suggested that I might be able to find a money changer nearby, so I ran off in search of one. I found some police manning a desk at the bottom of some stairs and asked them if they could tell me where I could find a money changer or an ATM. They pointed to a large building some distance away across a tangle of roads and said I could find an ATM there, so I started heading that way. I hadn't gone far when I came across a few bus touts who asked where I was going. I mentioned that I was looking for a money changer and a woman asked how much I wanted to change. I looked through my wallet and discovered that I had a very small number of small-denomination Thai notes and quite a large number of large-denomination bills. I handed over all of the small stuff and got a small amount of Malaysian ringgit back – which I hoped would be enough to cover the ferry tickets. I ran back clutching my cash, which thankfully just met our needs and we went through the barriers to join the scrum of people waiting for the next ferry.

About half an hour later, we climbed aboard the ferry, which was pretty basic inside – just rows of bench seats in a huge open space. After we disembarked we looked again for an ATM, again in vain, and for some sort of information centre, also in vain. Eventually Kate found someone who said that there was an ATM across the road and behind some buildings, so I left the others with the bags and went off to search for it. This involved a long loop around the back streets, but eventually I got some cash and also found a lovely big air-conditioned café/bakery with wifi a not-too-long walk away. 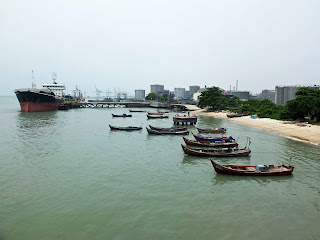 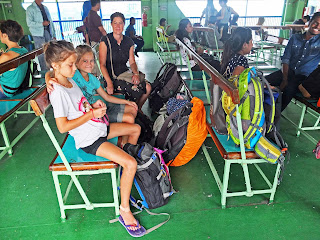 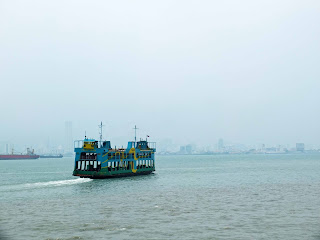 I led the others there and we found a quiet corner where we could let the sweat dry and figure out how to get to our hotel. There were even some power points where we plugged in and charged up. We bought a couple of pretty good coffees to pay them back for generously providing us with a sanctuary from the heat outside and then gathered everything up and set off. The staff told us that we could simply walk straight up one of the streets outside, which we duly did. George Town is one of those frustrating places where there's a perfectly good footpath – in this case quite a lovely one, contained in a colonnaded passageway alongside the buildings – that the local businesses consider to be a continuation of their premises, forcing pedestrians to walk in the road; the busy road populated by large buses and impatient motorbikes. 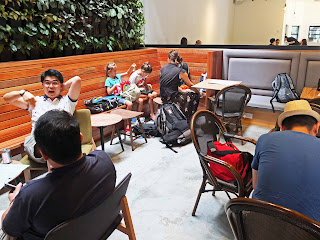 The walk to the hotel was hot and long, but we made it eventually, checked in and were shown to our room – by a very cheerful, energetic young guy with very little English. We tried to ask about the mortgage documents that we'd had redirected to the hotel, but he just smiled and indicated that he had no idea what we were talking about with a vigorous shake of his head and said that we should talk to 'the Boss'. Never mind – the room was nice, located across the road from the reception area on the first floor, high-ceilinged, clean and spacious, with windows that opened onto the street.

By now it was after 5pm and we hadn't had lunch, so we headed out to see if we could find somewhere to get a beer and some chips. We ended up the Monalisa Cafe, a wonderfully old school place that looked like it hadn't changed in decades and had the characterful staff to match – a middle-aged Asian woman in a man's shirt and trousers with short, slicked back hair; grandma playing online slots on a tablet in the corner; granddad slumped in a chair at the entrance watching the world go by, then getting slowly up to show us to a table; and, an effusive, energetic, skinny woman, presumably the owner, who came over and offered us free fruit – watermelon or pineapple. We would be doing her favour by eating it, she said, as it was just going to go off otherwise. She returned with a plate piled high with fresh pineapple, which the girls set upon with relish. We then chatted to her for a while and she mentioned that the night market that we were planning to visit for dinner would be diminished tonight. Instead, she pointed us in the other direction to a 'food court', which we set off for when we had finished our beer, chips and pineapple. 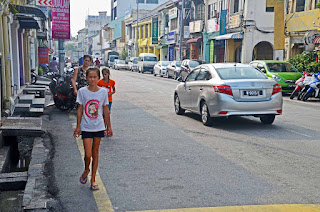 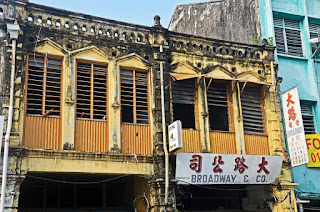 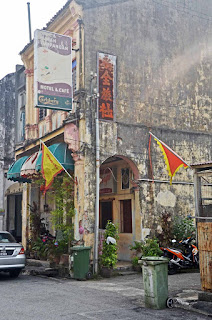 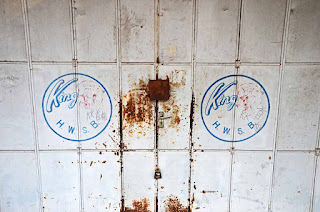 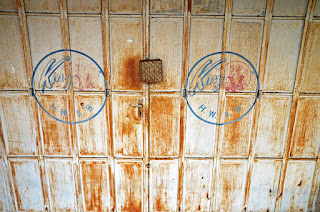 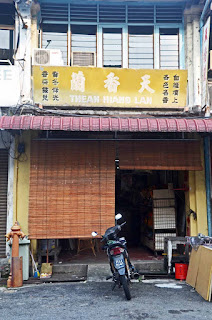 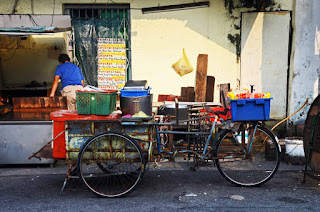 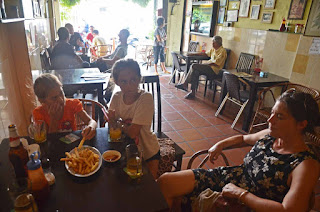 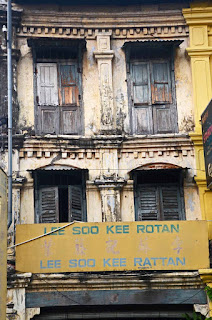 It proved to be a sort of street food lite – a large central eating area surrounded by small stalls selling all manner of culinary delights (fish head curry anyone?). You simply choose your dishes from a variety of vendors, place you order, giving them your table number, and they bring it over to you (and then you pay, which seems a bit strange). We ordered some sushi for the girls and some noodles, veges, satay sticks and roast duck for us and sat down to wait for it to arrive – ordering some drinks from a passing woman in the meantime. The food, when it came, was all good – the girls went back a few times for more sushi – but the place lacked atmosphere and we won't be back. 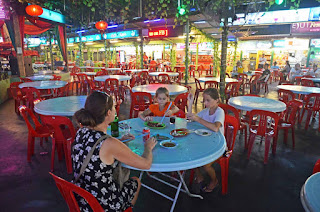 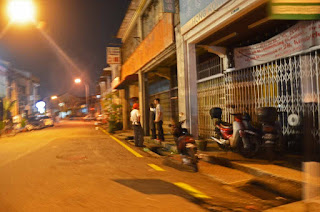 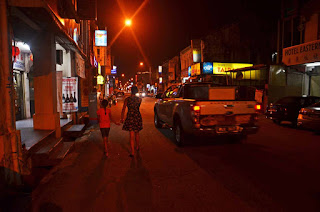