Early this morning we got up, packed and walked down to the coffee at the bottom of the road for breakfast. When we were done, we walked to the jetty and waited to board the ferry to Koh Samui. We got on early, found some seats and watched as the boat started to fill up with young backpackers on their way to Koh Phangan for tonight's full moon party. We had thought about staying on the island too, but the timing put us off a little – we didn't really want to be sharing it with large numbers of intoxicated/hungover youngsters. Among those filing aboard was a young guy accompanied by a nurse holding an IV drip. When he was seated, she brought on a gas cylinder connected to a face mask and we wondered if he was suffering from a mild case of the bends. 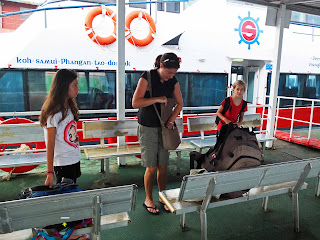 After an uneventful crossing, during which the girls were kept amused by back-to-back episodes of Mr Bean on the ferry TV, we got out and started walking along the long pier to the terminal building. When we were about halfway there it started to rain, and by the time we made it, it was properly pouring. At the terminal there were a few people waiting with signs bearing the names of the lucky tourists with hotel transfers, but although we had arranged for someone from our hotel to come and pick us up (the taxis on Koh Samui are notoriously expensive) none of the signs said Kate Brown. As the rain began to abate, and the crowd began to thin, we began to worry that something had happened to our lift and began to see what we could do about ringing the number we had been given. It was then that an older guy with piercing blue eyes and bad skin, who I had noticed checking me out earlier, came over and flashed us his phone – the screen of which said, yes, Kate Brown. The message we had received about the transfer had mentioned something about a red watch, but it had been in rather indecipherable English so we weren't sure what it meant. We had actually earlier speculated that this could be our guy as his watch had a red band, but were expecting a local so had dismissed the possibility. And apparently that was the problem – as a foreigner (he was from Siberia), he wasn't really allowed to be picking people up, so couldn't hold up a sign like everyone else.

It took us about three quarters of an hour to drive to our hotel – Koh Samui is significantly larger than Koh Tao – where we checked in and checked out our two rooms up on the third floor. They were a big step up from the last place – roomy, with nice furnishings and a TV each. We then made the short, but very pleasant (and in places very steep) walk down to the beach. We struggled a little to figure out how to actually reach the beach as the area behind it was completely clogged with hotels and guesthouses – eventually we just walked through the middle of one of them. Looking up and down the beach we found that we were located at the end of the action – the town and most of the restaurants were off to our left, while the area to the right was relatively undeveloped. 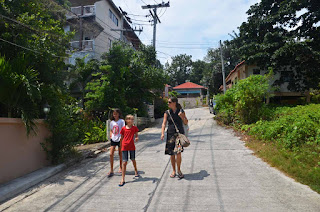 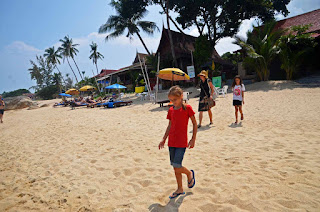 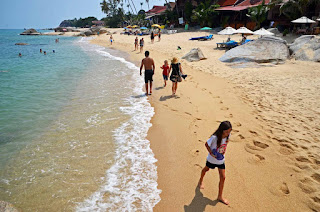 As it was around lunchtime we walked down and checked out the restaurants, passing a guy with a large iguana that he tried to convince us to pay to have our photo taken with. I asked him where it was from, as I was pretty sure there weren't any iguanas that were native to Thailand. He replied that it was indeed from Thailand, but I'm guessing that that just means he bought it off a guy in Thailand. We ate at a restaurant called No Stress. The name may have terrible, but the food was pretty good (but the beer rather expensive), then chucked our stuff on one of their sun loungers and went for a swim (a quick one for Kate and I and a much longer one for the girls). The good news is that the water is a lot deeper than it was on Koh Tao; the bad news is that it's no cooler. 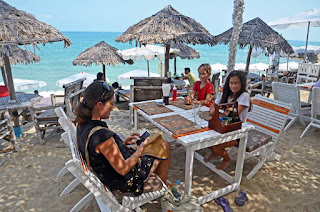 As the girls swam, Kate and I watched with fascination as a procession of hawkers made their way along the beach. Elsewhere, they would each inevitably have been trying to sell the same small set of merchandise – cheap jewellery and cheap sunglasses. Here, they were selling everything from ice creams and dresses to manicures and massages. 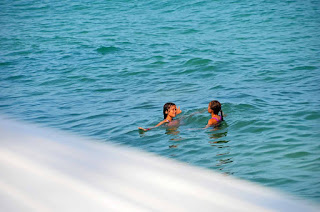 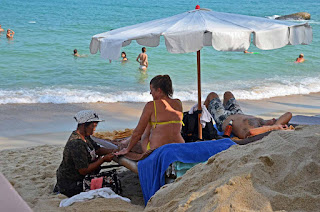 After a while, we decided to head back to the hotel. On the way back, we heard a noise up in the trees in a little vacant block just down the road from the hotel. We stopped to investigate and soon spotted a couple of large squirrels chattering away at something on the ground. As I tried to manoeuvre around to get a good shot of them, Sarah suddenly said, 'I just saw a flying lizard fly.' As many of you will know, I used to study reptiles and one of the creatures I most hoped to see while in Southeast Asia was a flying lizard. On our last afternoon in Chi Phat in Cambodia, Joe, the guy who hung around the restaurant that we regularly ate at, had told me that he had seen some on one of the trees just beside the restaurant – and although I spent a large part of that afternoon scanning the trees, I didn't see one. I knew that they were small and well camouflaged and I was slightly manic as I searched the tree for the lizard that Sarah had just seen, terrified that I would get this close and then miss out again. But then, there, just above head height, a spindly little lizard with a wide, flat body and a little head on a slightly elongated head, mottled grey and white – my first wild flying lizard. I made a half-hearted attempt to catch it but it quickly moved higher in the tree, where I spotted another. The two lizards moved together and then I saw something moving under the higher lizard's neck – it was flashing its dewlap, communicating to the other one. 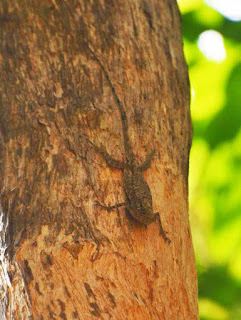 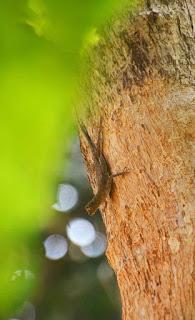 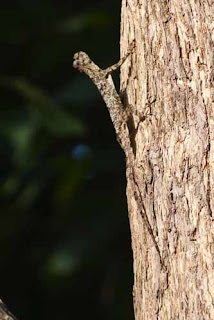 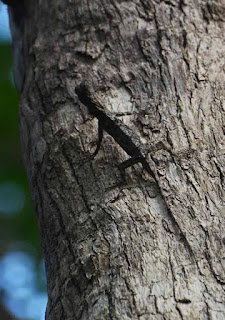 When we got back to the hotel, Kate went back out to walk up to the town and check out how we were going to get tickets for the next leg of the journey while the girls went for a swim in the hotel pool. When she got back, we all went over the road to check out something that had generated much family excitement during the drove to the hotel – a great big supermarket! Inside the cavernous space, we spent some time just wandering around admiring the long shelves stocked with all manner of 'normal' stuff and then got down to business and collected up some food for a picnic dinner – a cooked chicken, some cheese (Danish blue!) and crackers and some fruit and veges. We looked in vain for a fridge with cold drinks, bought our goodies and then I walked up the road a bit and bought some beer and Coke from a little roadside restaurant.

Back down to the beach we sat on a big rock near the water and had our dinner. Flashes of silent lightning regularly lit up the towering clouds around us as we ate, and when we'd finished we sat and watched them, and the bright sparks rising from the towns along the beach and disappearing into the clouds – oriental lanterns. After a while, we noticed that the lanterns were showing more lateral than vertical movement as the wind picked up. We also started to hear rolls of thunder accompanying the lightning and decided that it might be time to head back to the hotel. Sure enough, it started to rain lightly as we approached home, and it had turned torrential by the time we were in the room. 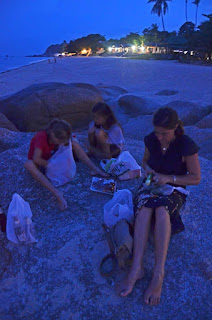 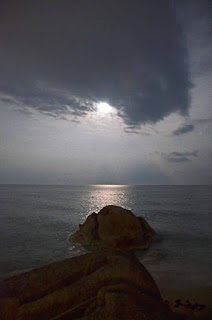 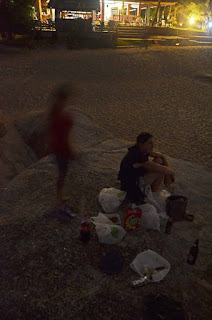 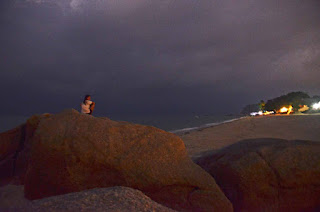