Up early and after breakfast at the hotel, we drove out to the archaeological site, which we had virtually to ourselves. Our now-very-cat-friendly girls made friends with some tabby kittens that were wandering around the ruins. The site is suitably impressive. Although it hasn't been extensively reconstructed, there's enough there to give you a sense of what it was once like – and the setting itself is so dramatic that it lends the whole place an aura of awe. 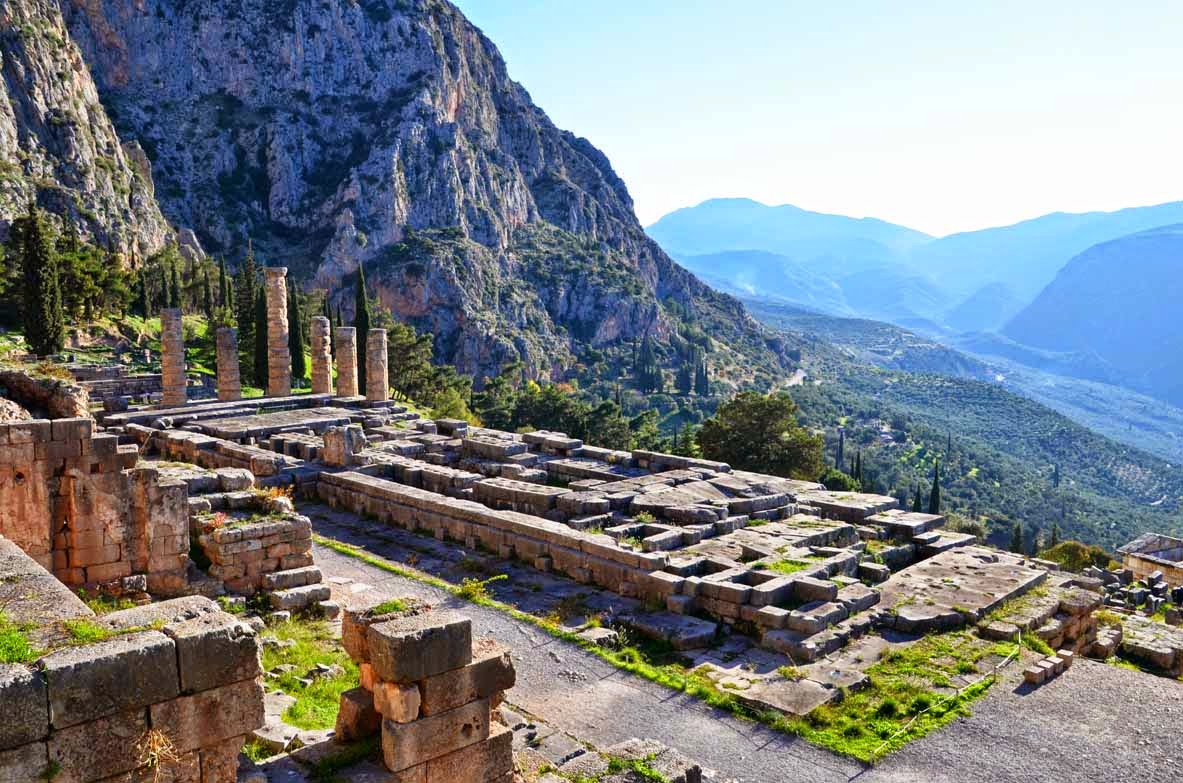 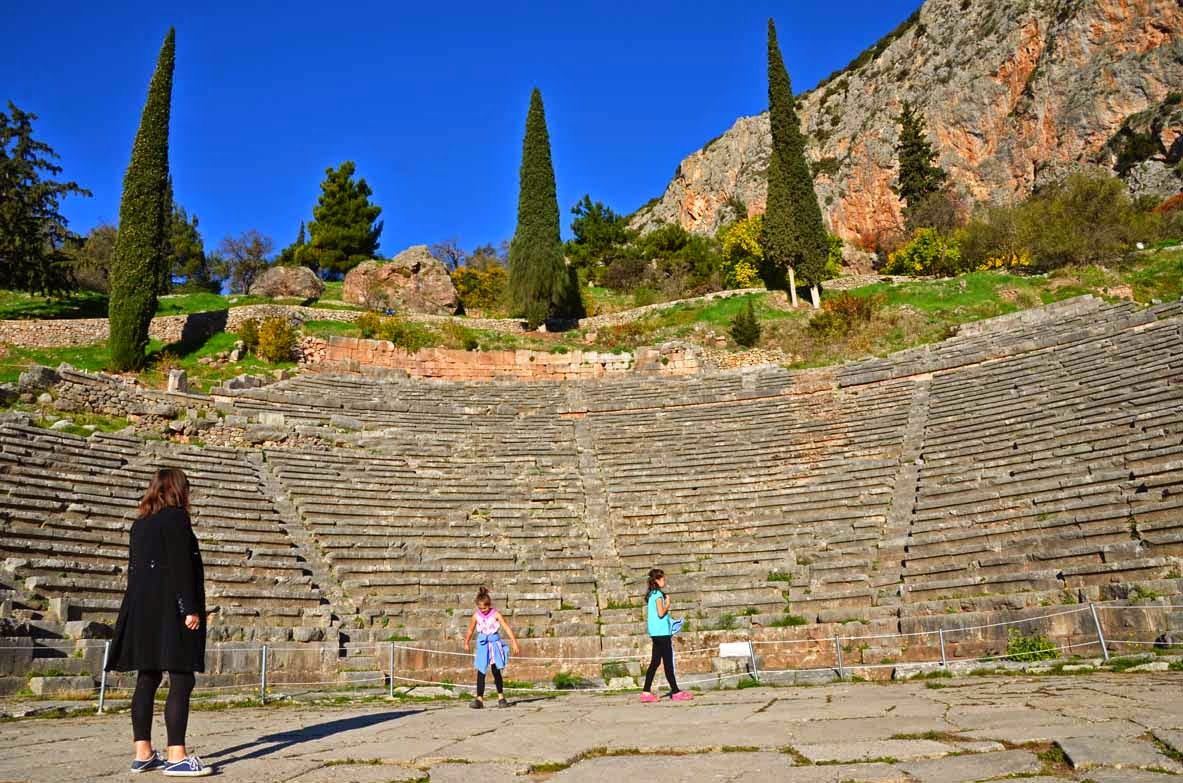 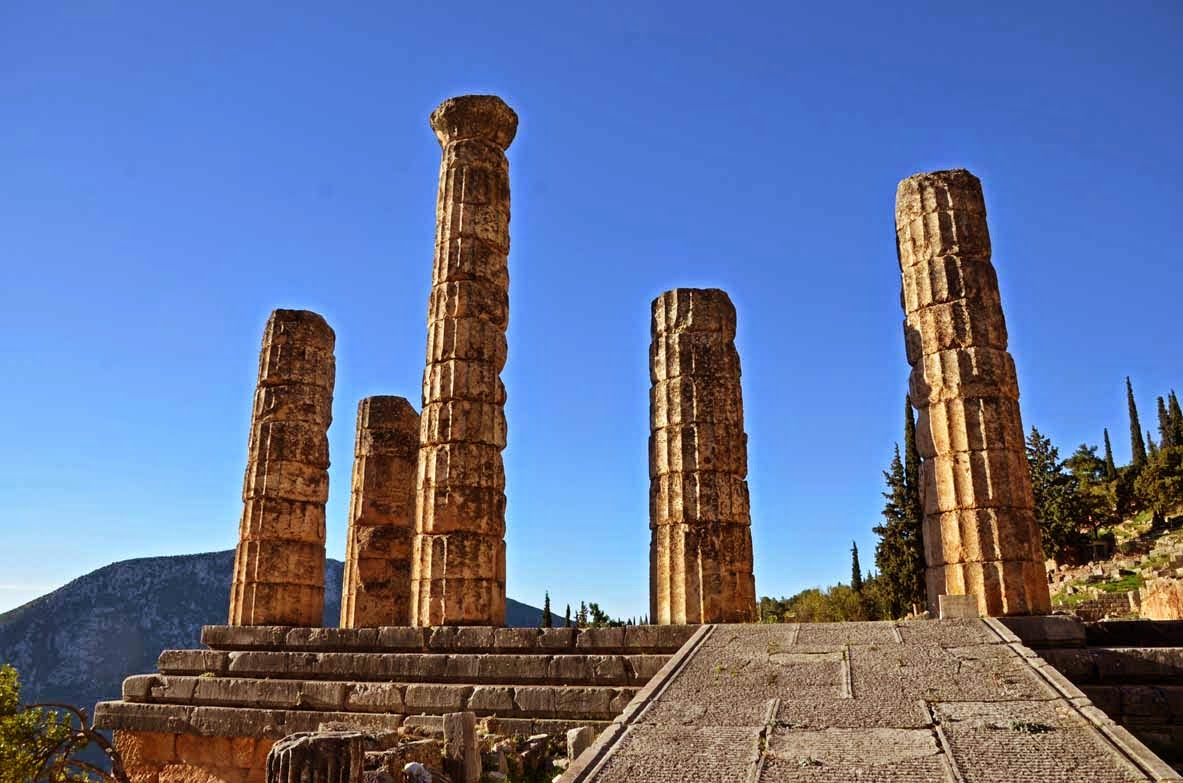 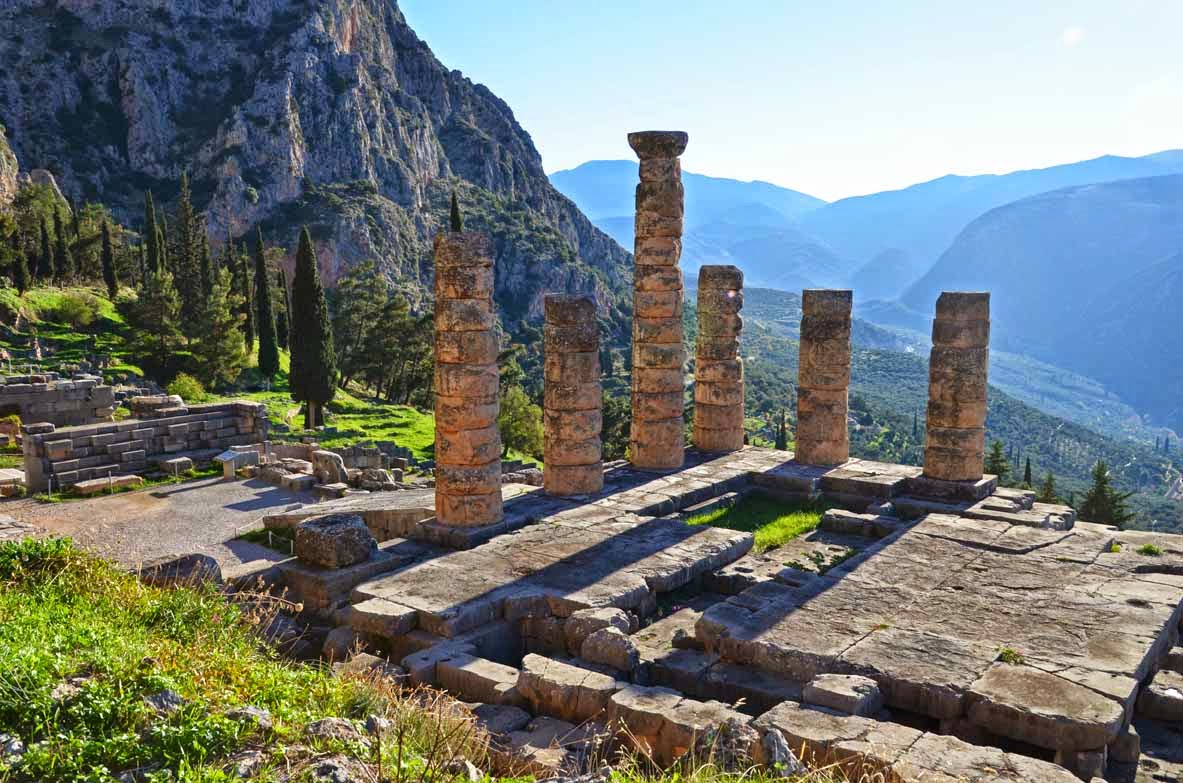 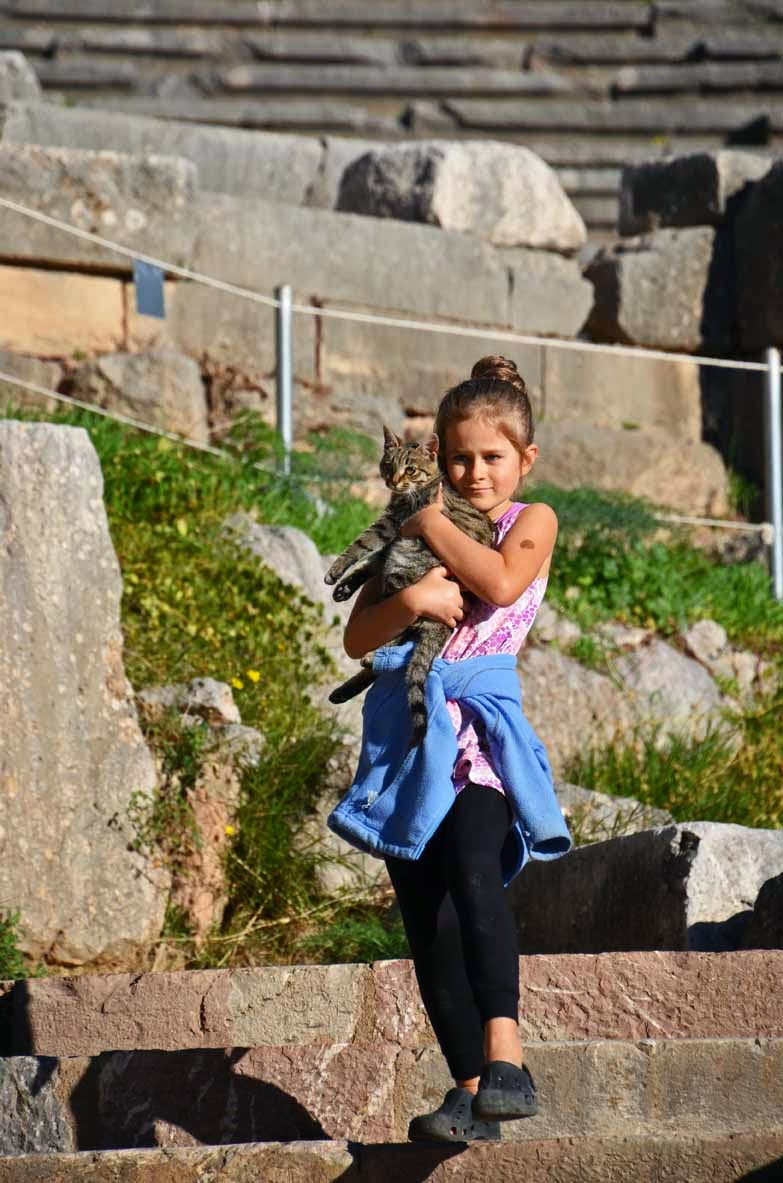 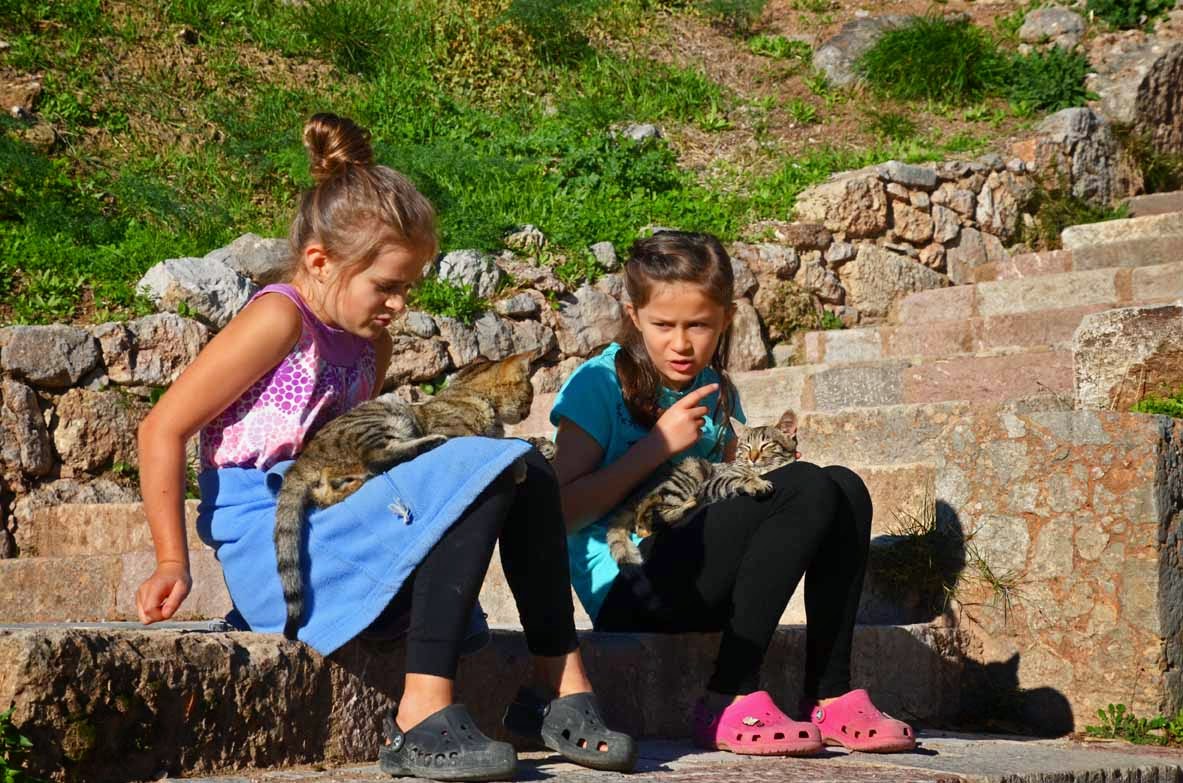 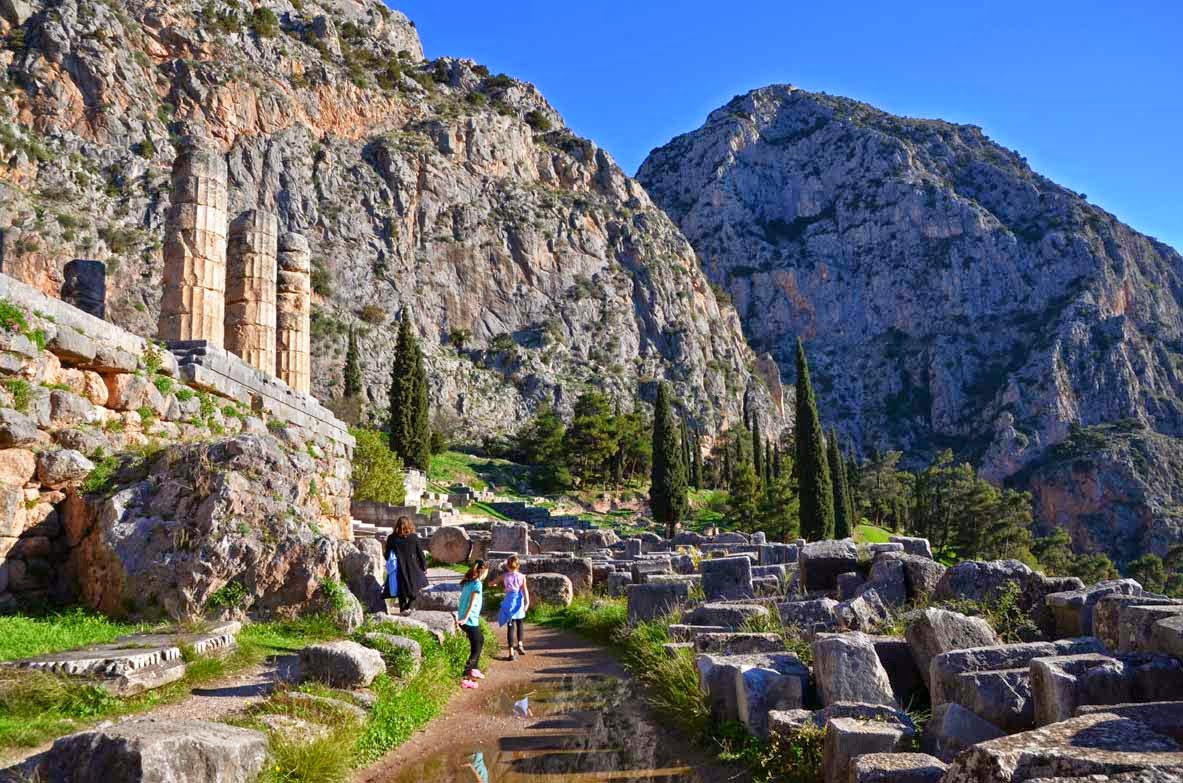 We then drove down from the mountains and along the northern coast of the Gulf of Corinth and across a very impressive bridge to Patras, where we were due to catch the afternoon ferry to Brindisi in Italy. We got there nice and early, which proved to be a very good thing. We began following the signs to the 'Italy terminal' – and then almost gave up and turned back as it proved to be a long way past the other terminals and the signposting was very intermittent, so we figured we must have passed it. 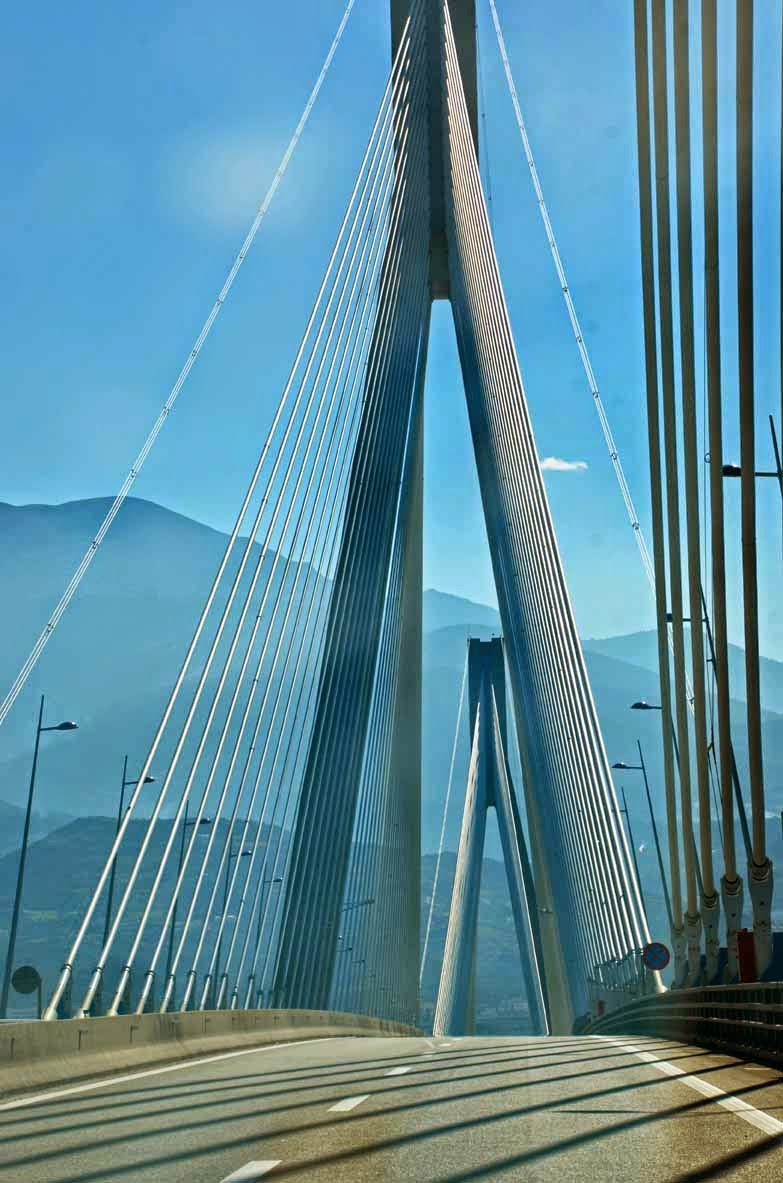 Once inside the terminal area, we followed some more signs that pointed us back out onto the road, so we headed back for the large terminal building that we had driven past on the way there... and proceeded to get properly lost in the back streets of Patras. Sally very kindly extracted us from the maze of narrow one-way streets and we eventually pulled into a weighing station and asked the bulletproof-vested guard for directions. Thankfully, he spoke English and directed us back to the terminal area that we had just left.

We eventually made it back there and this time we stopped and asked directions from a friendly policewoman, who directed us behind some nearby buildings and there it was, the fabled ticket office! Of course, we still managed to drive in around in circles (and the wrong way down a one-way lane) looking for somewhere to park, but we finally made it in and in no time at all, we had boarding passes. We still had loads of time to kill, so we drove up the coast and had lunch at a little taverna right on the water, chilled to the bone by a frigid breeze blowing in off the sea.

Back at the port, we did some dinner shopping in a supermarket then drove into the terminal and parked so we could pack some bags for the crossing. All the while, a group of boys were running around the lorries playing hide-and-seek with the police – obviously illegal immigrants trying to find a way to hitch a ride to Italy. It all seemed quite good-natured – the boys smiled and laughed as they sprinted from vehicle to vehicle, motorcycle-mounted police following desultorily behind. I really don't know how they thought they were going to get through, though, as the border police were being extremely thorough, checking every vehicle inside and out as it passed through passport control. When it was our turn, they asked us endless questions about where we had come from and where we were headed – they even wanted to see our tickets from Syros. They were clearly suspicious as our story didn't make much sense to them, but after they had a bit of a rummage around in the back of the car it was pretty obvious that we barely had room to fit ourselves in, let alone a stowaway or two, and they waved us through. But because this was a Greek ferry terminal, we had no idea where to go next, so we asked for directions one last time and then drove onto our ferry.

We were one of only four cars making the crossing and we were surprised and excited to pull up behind a car with GB plates. It turned out, however, that it was being driven by an Australian couple. We started up a conversation with them and discovered that they were young doctors on their way back to the UK after having taken part in the Mongol Rally. Unsurprisingly, they were full of hairy stories of driving through the 'stans and Kate and I both quietly breathed a sigh of relief that we had decided not to take that route home.

We bid them farewell and made our way to our cabin, where we dined on barbecue chicken and salad, then hit our bunks, listening to the Eastern Europeans in the neighbouring cabin talking to their friends in their other neighbouring cabin.