After a pretty bad night's sleep - the narrow-gauge train was very rocky – we had a breakfast of milk biscuits and lychees in our compartment. The train was a bit late, pulling in to the station at about 8.30am. Out front, there was a more than usually high level of taxi chaos and it took us some time to get into one. We then drove through the traffic chaos of Ho Chi Minh City to the office of the bus company that Kate had picked out to take us to the little Mekong town of Ben Tre – the amusingly named Thinh Phat.

We bought our tickets and settled in next door in the waiting room to wait for the 9.30am bus. We grabbed a couple of very nice banh mi from a cart on the street corner and then hopped on the bus for the two-hour trip. When we arrived in Ben Tre, we transferred to a mini bus that took us to our hotel, which was located just across the road from the Mekong itself. The hotel was very large and rather empty and our footsteps echoed back to us as we walked up to our large, high-ceilinged room on the third floor. Not long after we got to the room, a squall suddenly blew through, whipping the banana trees and coconut palms below into a violent frenzy - and then fading away as suddenly as it arrived. 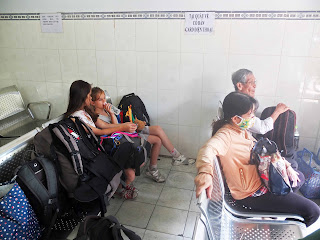 After dumping our stuff, we went out to look for some lunch. The hotel is a fair way from the centre of town, so we walked along the road beside the river towards the centre. There's really not a lot to Ben Tre – just a few little food and clothing markets and some pretty basic shops. It feels a lot like what I guess it is – a sleepy trading town on the Mekong. We found a little place serving food in the first of the food markets we came across and then went upstairs to the clothing market, where we found a nice dress for Sarah. We then went into another clothing market down the road, where the stall owners kept grabbing Zoe as she passed. I'm not sure if I've written about this already, but as in China, here the girls are a thing of fascination to the locals. But unlike in China, where people are mostly very polite and deferential, asking permission to have their photos taken with the girls, here they are very physical – grabbing them and pinching them and rubbing their heads and so on. Thankfully that's as far as it goes. We've heard stories from families with smaller children of people actually groping their kids – even sticking their hands into their pants. It doesn't appear to be anything sexual, although what it is, no-one is quite sure. 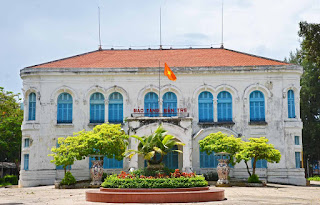 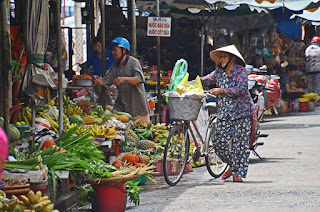 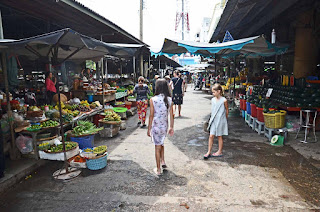 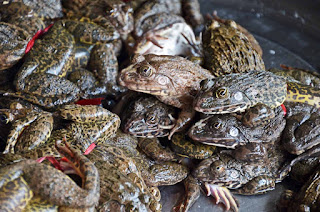 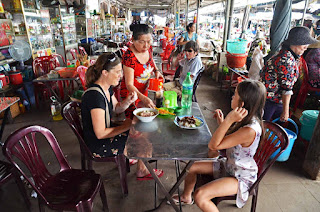 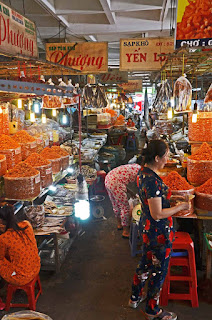 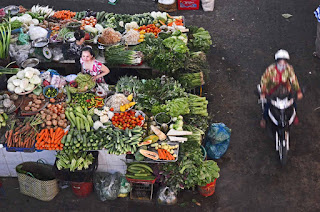 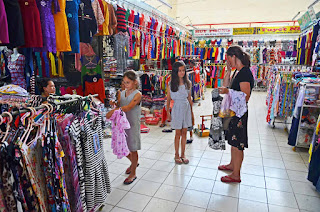 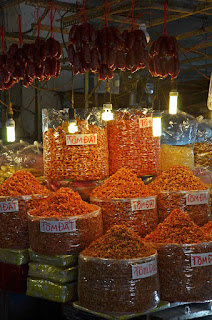 We wandered around the town a bit more, stopping for some cold drinks in a little noodle restaurant. Looking out onto the street, I noticed a strange anomaly. As in most place in Vietnam, a lot of people were riding bikes around. But a lot of the older women were sitting not on the bike's seat, but on the rack behind it, giving them a weird look of having to grope forward for the pedals as they rode. We're not sure what this is about but suspect that they may have to ride around a lot with their grandchildren on the seat, so have just become used to this other strange, awkward arrangement. 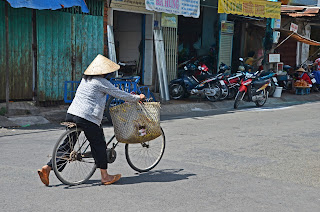 We made our way back down to the waterfront and towards the hotel. As we walked, Zoe and I spotted a rat strolling along ahead of us along the pavement, bold as brass. We followed it along and saw that it was on a collision course with two grannies sitting outside a stall/shop. I was curious to see how they reacted – surely they would be utterly blasé, given the ubiquity of rats in this part of the world. But no, when they spotted the little creature heading their way, they erupted in the stereotypical response of women to rodents, leaping from their seats with a horrified, hysterical shriek or three. 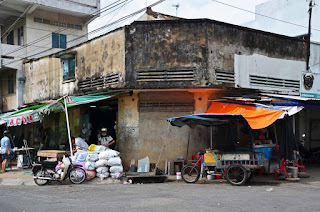 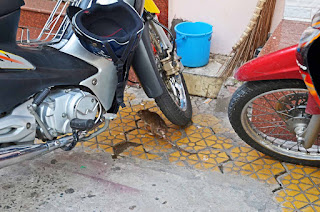 Just before we got back to the hotel we stopped to get a couple of coffees. The first place we went into looked like the real deal, with artsy photos of coffee beans all around, but Kate struggled to get the woman to understand what she wanted – she eventually annoyed her so much that we went next door. Here she had much less trouble. What she was after, we now know, is what's known locally as ca phe sua da. It's made by brewing coffee in a metal drip filter placed over a glass with sweetened condensed milk in it. When all of the water has passed through the filter, you mix the milk and coffee together and then pour it over a glass of ice. When this has cooled down sufficiently, you typically drink it through a straw. I had asked Kate to order me a hot coffee, but something got lost in the translation here as well, and we soon had two ca phe sua da in front of us. Kate offered to send it back, but I decided to give it a try – and became an instant fan. 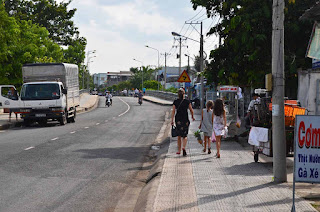 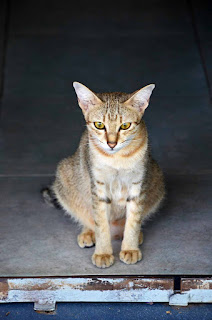 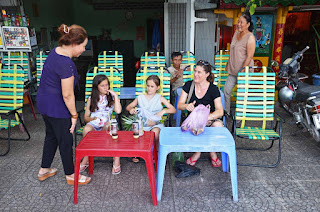 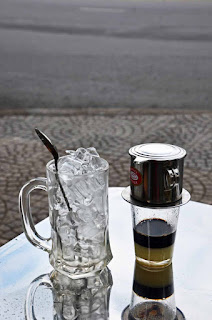 Back at the hotel we all went for a swim in the pool and then went out for dinner. As we walked along the Mekong, we could hear an announcement coming from a series of loudspeakers attached to the telephone poles beside the road. This is a common thing in Vietnam – when the government wants to let the people know what's on its mind, it simply blares the message out from these ubiquitous loudspeakers. From what I can gather, the locals don't pay them much attention, however.

We didn't feel like walking all the way back into the centre of Ben Tre to try to find somewhere to eat, so we ended up in a big floating restaurant not far upstream. It was awfully brightly lit, but we managed to get a table upstairs – and to get the table moved right to the edge so that we were away from the lights and looking out over the river as the cargo boats passed by and the sun went down. 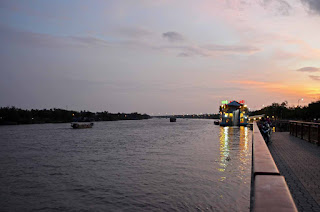