Day 297: Land of the laundries

When we awoke in the morning, around dawn, Kate and I heard a strong wind rise in the trees around the bungalow. It was soon followed by a louder noise – heavy rain falling on the bungalow's thatched roof. Our hearts dropped – it looked as though we were in for a wet ride downriver - but by 6am, the rain had begun to tail off and by the time we had packed and made our way to the visitor centre, it had stopped altogether. We paid up, shouldered our packs and walked down through the village to the river, where a boat, and a young French girl also making the ride out, were waiting. We climbed aboard, pleased to see that this boat was in better condition than the one in which we had arrived, with a proper plastic cover over a more extensive roof. Some rain fell on the journey back, but not much and we stayed relatively dry. We actually saw some wildlife this time – spotting some hornbills in the trees and catching glimpses of some moneys running along branches near the water line. 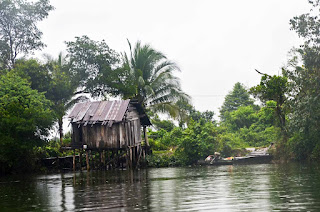 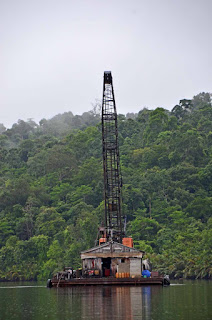 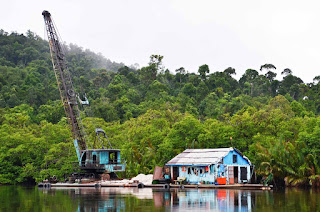 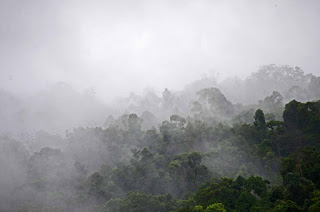 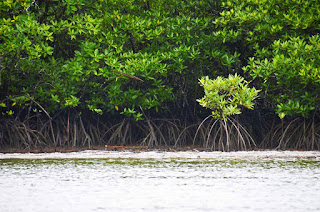 When we reached the bridge, we disembarked and walked up to the main road, where our boat driver indicated we should wait in a small roadside restaurant for our bus. The French girl was heading back to Phnom Penh and her bus arrived first, ours following not too far behind. Our destination was the port town of Sihanoukville and we arrived at around midday. Climbing out into the heat of the day, we were, as usual, instantly surrounded by a crowd of insistent tuk-tuk drivers, all wanting to know where we wanted to go. I mentioned the name of our hostel (Backpacker Heaven – I know, what a terrible name!) and they parroted it back to me, except that they weren't quite saying it right (Backpacker Haven). And when Kate asked them to point to it on a map, they got the location wrong. And naturally they were all quoting a ridiculously inflated price.

There was one who was a bit more insistent than the others and we began haggling with him, getting the price down from $6 to $2. Kate also kept at him to guarantee that he knew where the hostel was. Eventually, he turned to Kate and said: 'Stop talking! I know Backpacker Heaven. I live here.' He then climbed on the bike that pulled the tuk-tuk and drove us, yes, to Backpacker Heaven. Which turned out to be significantly nicer than we had expected, given the awful name. Indeed, the name could be said to be quite fitting – as it was so nice that your average Southeast Asia backpacker would think it looked quite heavenly.

While we checked in, Kate asked the woman at reception about getting to the port. She assumed we meant the pier, which is where the boats leave to take backpackers to the nearby islands, but we had gone through all of this with the people from the resort and we were sure it was the port. 'Really?' asked the woman, 'I can't go in there.' We explained that we were going to Song Saa. 'For a day trip? No? For how many days? It's very expensive!'

The room wasn't ready yet, so we went downstairs to the bar area, where I got a cold mug of draught beer and the girls jumped in the pool and then played on the hostel's Playstation (yes, this place is a bit like Heaven). We then went for a little walk around town, which wasn't our idea of Heaven. It was hot and dry, which at least partially explained the incredible profusion of laundries in the town. It was also rather seedy, which at least partially explained the incredible profusion of middle-aged white men, many with young Cambodian women on their arms. We found a nice big park where there was a big group of late-middle-aged locals doing aerobics with vastly varying degrees of enthusiasm. 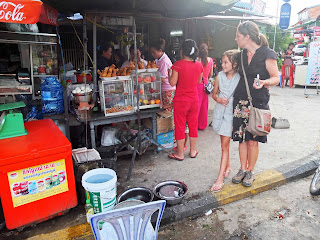 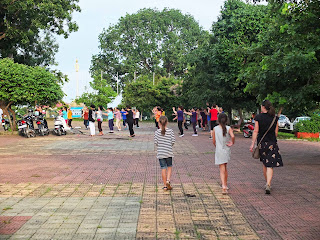 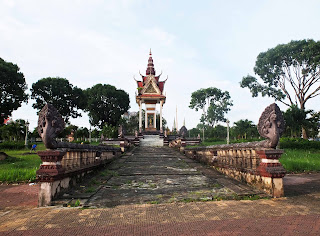 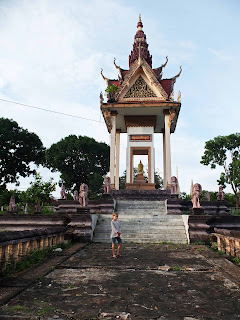 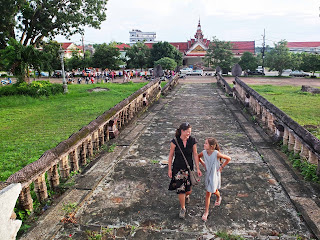 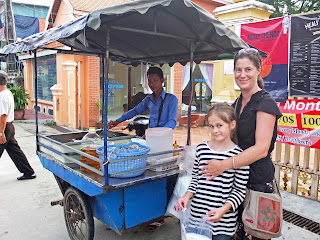 Back in the town, we stopped at a little restaurant called Mr Heng and ordered some draught beers and a plate of chips, and then broke out the cards. The beers came out in mugs that had just been taken out of a freezer, so the beers were super cold and extra refreshing. The staff were also super friendly. Chips and beers polished off, we went across the toad to another little restaurant that offered barbecued skewers, but the meal, when it arrived, was disappointing – they hadn't put any oil on the meat before they cooked it, so it was dry and a bit chewy. When we were done, we went back across the road for some more chips and beer at Mr Heng.
Posted by SGKZ at 15:54