In the morning we packed up and went downstairs to wait for our transport to the ferry terminal. While we waited, I chatted to one of the pedicab drivers hanging around outside the hotel, a young guy from Cambodia who was studying in the hope of returning and becoming a tour guide at Angkor Wat. As we talked, a few guys in green shirts appeared and loitered around reception. Kate went out looking for lychees in order to spend the last of our dong and just after she left, we discovered that the guys in green were our pedicab drivers come to take us to the docks. Kate soon reappeared with the fruit and we loaded up the cabs - Zoe and I went in the first one with most of the bags and then Sarah and Kate followed along after in cabs of their own. 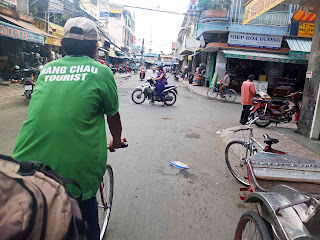 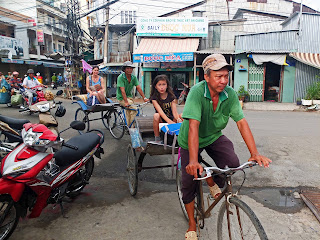 At the dock, we were ushered on board the boat and away we went. It was quite cramped, so I went out the back, where I was soon joined by the girls and we all sat around eating the lychees. We were handed our forms for our entry into Cambodia and as we filled them in, we watching in amusement as a Dutch guy frantically went around the boat borrowing dong – he had read that the Cambodian visa cost US$20 and then discovered that it was US$34 and he didn't have enough money to cover it. 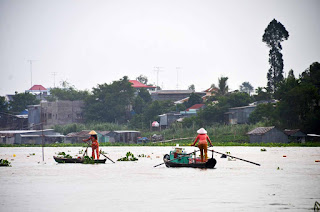 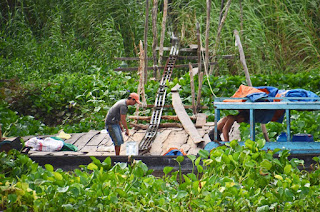 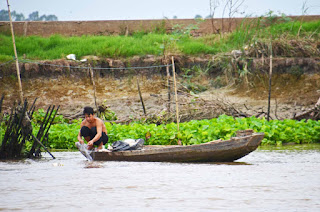 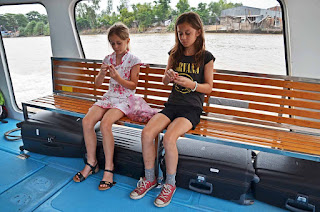 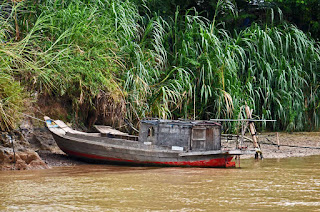 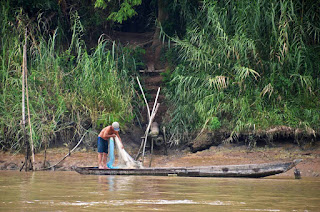 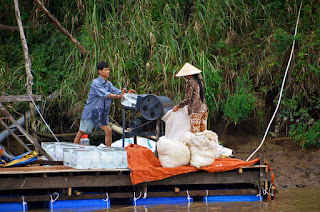 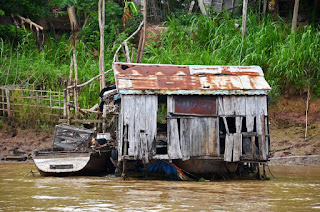 Before too long, we stopped at the border, where we waited 30 minutes to get our exit stamps. Then it was back on the boat for the short trip to the Cambodian side, where we got out to wait some more – a crowd of tourists standing around a big fish pond swapping back stories and itineraries. We were through first as we were the only ones who had already arranged visas. When everyone else was properly visa-ed up, we hopped back on the boat for the last leg to Phnom Penh. 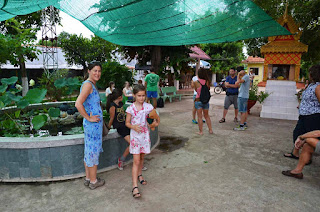 After we docked, we grabbed our bags and climbed the stairs up from the river to the street. Naturally, there were lots of tuk-tuk drivers loitering around offering rides, but as the hostel wasn't that far away, we decided to walk. It wasn't long before we were regretting our decision as although it was overcast, it was very hot, and the hostel was a bit longer away than we thought.

Once we got there, we checked in and were taken up to our room, which was pretty basic and cell-like but seemed clean enough and had a fan and air conditioning. After showering off the sweat, we went out for some food, stopping at the first decent restaurant we found – a shady place shielded from the street by a thick wall of potted palms. We ordered a red curry, some fried rice and crepes for the girls. It was happy hour (sic; apparently it runs from 2.30pm to 1am), so we ordered a one-litre pitcher of refreshingly cold beer for $2.50. And yes, it did make us happy.

After we had eaten, we walked out to the Central Market, stopping on the way to get some money. Cambodia runs a dual currency system – there's a local currency, the riel, but US dollars are more commonly used, with riels usually only handed over when your change comes to less than a dollar. The ATMs dispense dollars only (assuming that they will give you any money at all and after you've paid the $5 charge that virtually all of them levy). The Central Market is a huge Art Deco building constructed in 1937 with a central domed area and four arms running off it, but like most markets, it has become a warren of overstocked stalls that is quite difficult to get your head around. 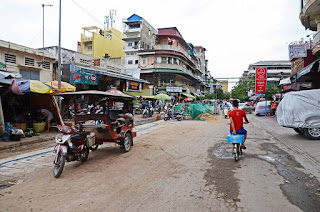 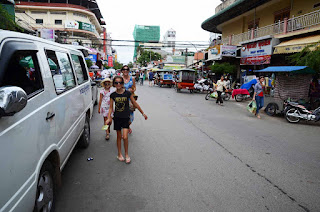 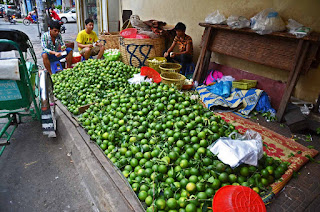 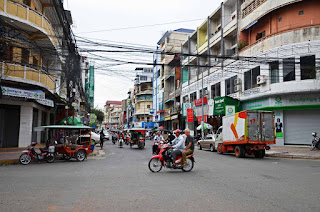 Since Mongolia, where I had to throw out two of my t-shirts due to moisture-induced mustiness - I've been travelling with two t-shirts: one that I try to only wear out at night, after a shower and when it's cool enough to keep the sweating to a minimum; and another one... That other one gets washed every few days if it's lucky and although it still mostly smells okay, it's not in a good way, and it's past time to replace it. I'd been on the lookout for a new one for weeks, but the choice is pretty limited and I hadn't seen anything I liked. As we walked around the market, Zoe spotted a Volcom t-shirt. Those of you who know me well will know how I feel about Volcom, so this was cause for great excitement. Things got better when we enquired about other colours (the one we first spotted was bright orange and had obviously been hanging up for quite some time, so was a bit tired). I'm usually a medium, and there was a huge range of t-shirts in medium – but in this case, naturally, I was a large, and there was only yellow and white in large... So I had to console myself with two Converse t-shirts for $3 each instead.
Posted by SGKZ at 15:39