After packing up and checking out, we walked to the supermarket up the road where Kate had bought the bus tickets and sat down to wait for the 8.30am bus to Phnom Penh. Next door there was a woman in pyjamas grilling pork, so I went up and grabbed two serves of the local rice-and-pork breakfast, which we happily scarfed down as we waited. 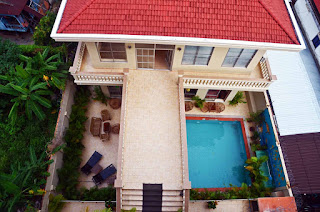 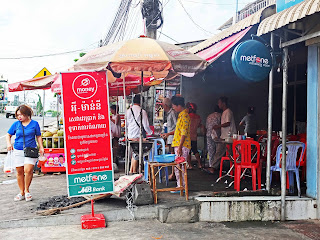 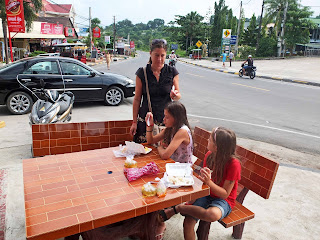 When the minibus arrived we all clambered into the back seat for what turned out to be a pretty uneventful trip back to Phnom Penh. When we arrived, Kate asked in the office about getting the bus up to Kratie, where we plan to stop to break up the journey north into Laos. However, the woman on the desk had no idea what she was talking about, despite there being a big sign out the front listing Kratie as one of the company's destinations. So be it. We hopped into a tuk-tuk, which took us to our accommodation for tonight – Aura, a 'thematic' hostel, where we were given the Peacock Room. After our last two Phnom Penh hostel experiences this place was a revelation. The room was pretty small, with just a double-bed bunk and a small bathroom, but, crucially, it was quite new, so it was still bright and clean. And it was air-conditioned. 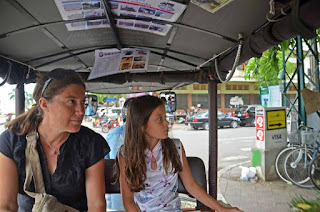 After lunch, we hired a tuk-tuk to take us out to the Myanmar embassy to pick up our passports, hopefully with our visas inside. The driver didn't know where the embassy was, but we had the address and he knew the road, so he agreed to take us out there. The embassy was supposed to be at number 181, but when we reached the 200s it didn't feel as if we had gone far enough. However, the tuk-tuk driver stopped and we got out and started walking back down the road to where 181 should have been. Sure enough, we got down to the 160s with no sign of the embassy. We were sure it was further along the road, so Kate got out and walked up, with the tuk-tuk eventually starting up and following her. And sure enough, for some reason number 181 was located somewhere among the high 200s. We went inside and picked up our passports, which had visas inside – hooray!

Our tuk-tuk driver then took us out to the Central Market. Before we went in, however, we went looking for the bus station, where we would hopefully be able to buy our Kratie tickets. Kate's directions were a little vague and we spent quite some time wandering around searching for it, but after asking for some new directions, we finally got there and bought the tickets we needed.

We then went into the market, where I bought a new t-shirt to replace one that I had bought there last time (I'd already given it quite a work out and it was definitely in need of replacement), some flip-flops/thongs (my last pair had given up the ghost on Song Saa) and some bananas. Next stop was the post office, where Kate and I packaged up and sent off the shirts and dresses we had bought to wear on Song Saa.

And then, finally, we got another tuk-tuk back to the hostel, where we climbed the stairs to a rather nice rooftop terrace. We ordered a few beers, played some cards, ordered a pizza, played some more cards, ordered some more beers, played some more cards and eventually, after a ridiculously long time, received our pizza, which we suspect was actually ordered in from a nearby pizza place. All the while, Kate was checking her phone for an email from the hostel she had chosen in Kratie. This was an NGO-supported training hostel, but unfortunately they don't appear to have trained the staff to respond to emails, so it looks as though we're just going to have to get the bus up tomorrow and see what we can find. 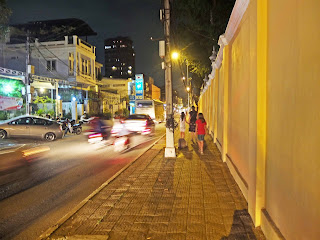 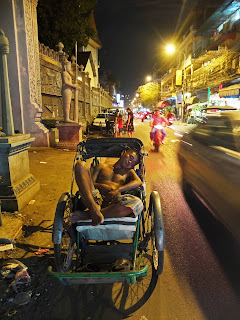 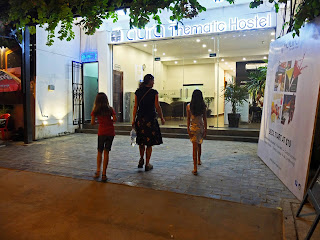