Day 305: Another meeting with the Mekong

The alarm went off at 6am and we were in our tuk-tuk and on the way to the bus station by 6.35am. When we arrived, Kate and Sarah bought some bananas, mangoes and dragonfruit from across the road in the Central Market and some baguettes from a woman walking around the bus station while Zoe and I waited with the bags (and I patted a truly scruffy, and extremely dirty cat that was skulking around the seats). And then we all got on the bus and away we went. 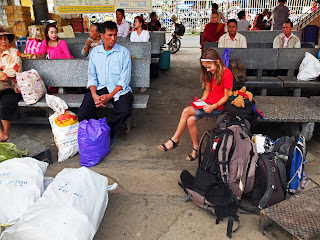 After a few hours we stopped for lunch at a big hangar-like restaurant in the middle of nowhere. On the periphery of the restaurant there were some stalls selling all manner of inedibles, including spiders, crickets and frogs. While we were there, two young monks walked in carrying little metal pots for collecting offerings. Several of the patrons in the restaurant hurried over to give them money or food and receive a quick blessing, complete with the monotonal intoning we had experienced on Koh Rong island. 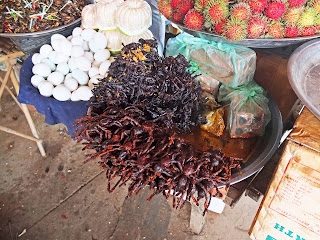 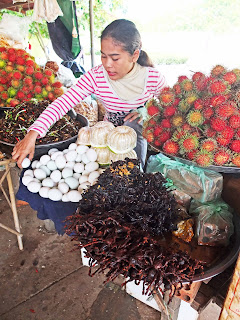 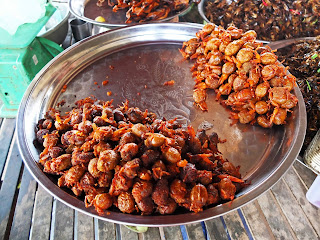 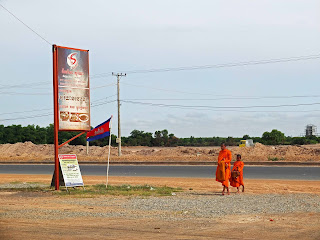 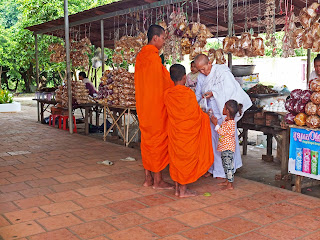 When the bus finally arrived in Kratie, the girls and I sat beside the Mekong with the bags while Kate walked up the road to see if she could get us a room in the hostel. It turned out that they did have our booking, so when she got back, we all piled into a tuk-tuk and drove up and checked in. There's a little restaurant attached to the hostel, so we decided to stay there for lunch. Then, at about 5pm, we walked into the town – a pretty basic place with a big central market and not much else. We looked around for somewhere to have a beer, but the options were very limited. The one place that looked okay – a big, open restaurant on a street corner opposite the market called Le Tokae, which was recommended on TripAdvisor – was absolutely teeming with white folks, and we were reticent about joining them. 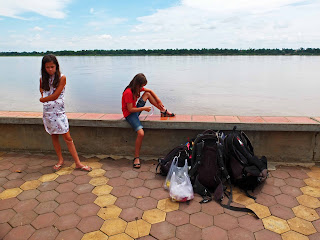 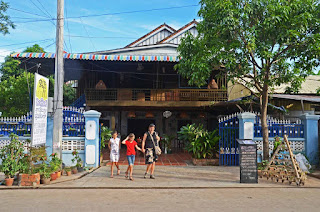 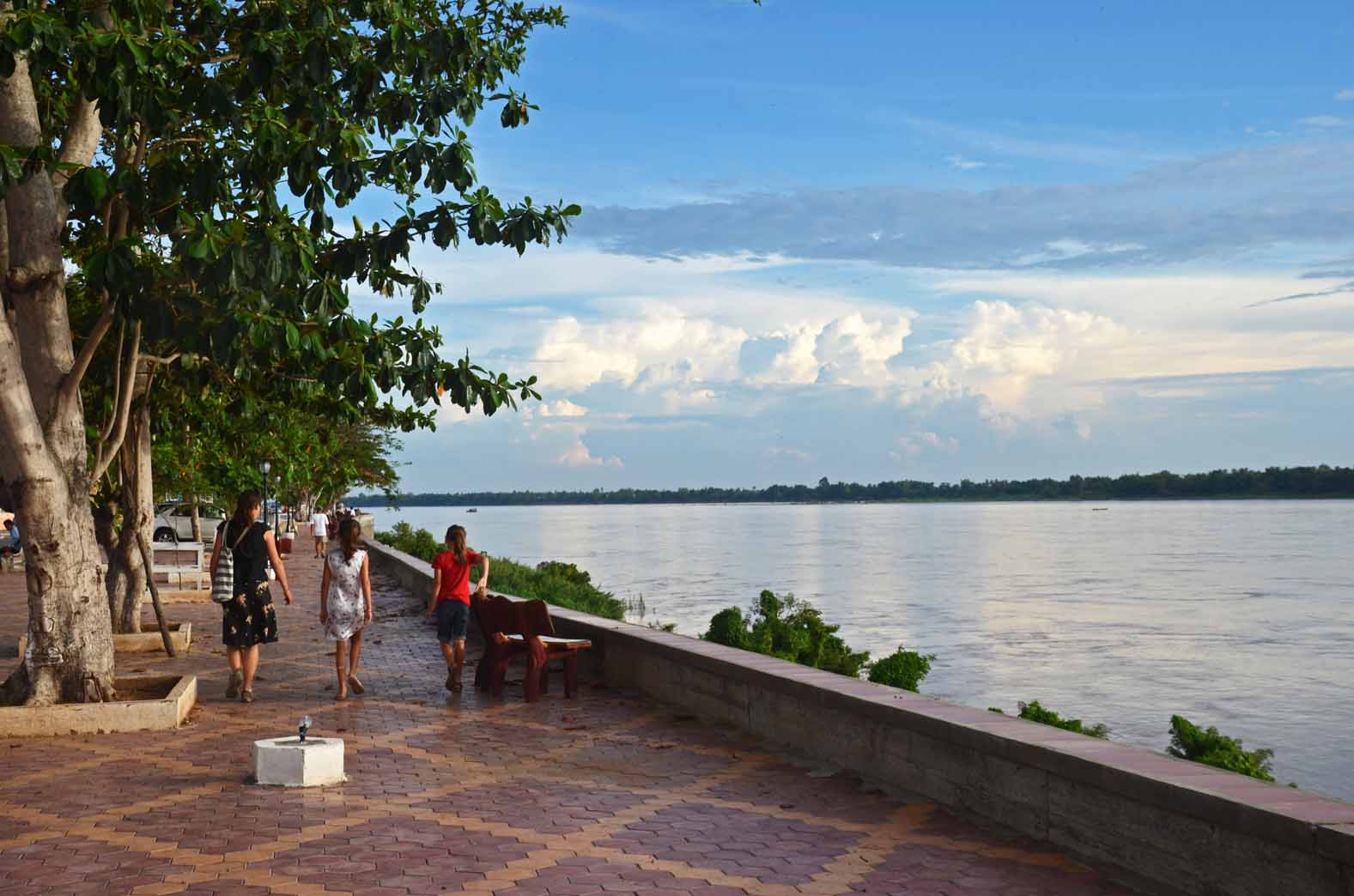 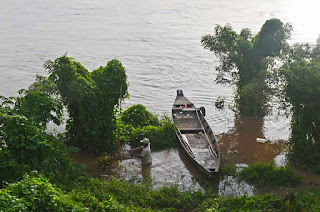 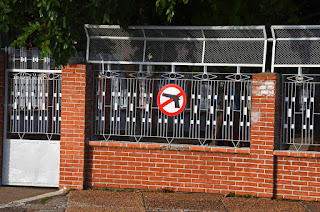 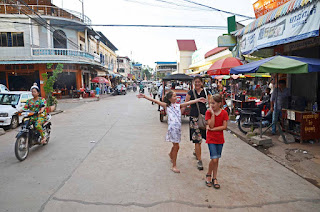 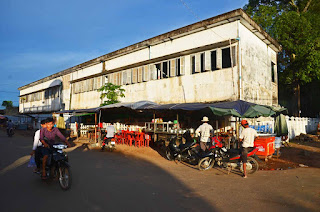 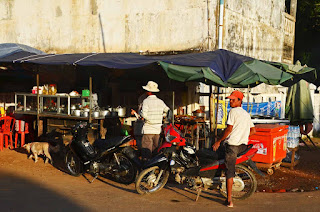 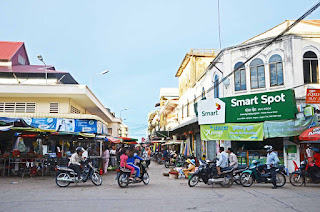 As we stood around wondering what to do, we bumped into a Belgian couple who are also staying at the hostel. They were on bikes and we chatted to them about what they had been up to. We had come to Kratie partly to break up the journey north to the Laos border, but it's also one of the few places left in the world where it's possible to see Irrawaddy river dolphins. It's quite an expensive undertaking, however, and we weren't sure if we wanted to spend the money – especially if there was a risk that we wouldn't see the dolphins. It turned out that the Belgian couple had been to see the dolphins today and were very positive about the experience. They had also just ridden around the large island that lies adjacent to Kratie in the Mekong - the other thing that Kate had singled out for us to do - so now we have tomorrow planned.

After saying goodbye to the Belgians we bit the bullet and joined the other tourists at Le Tokae, ordering some beers and chips and, eventually, some fairly ordinary dinner. As we walked back to the hostel, the huge clouds on the horizon were intermittently backlit by bright flashes of lightning. 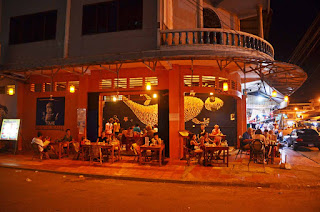 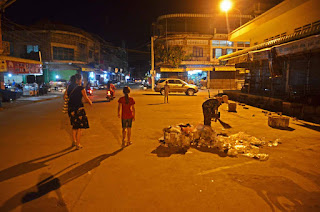