We were up at 6am this morning to make sure that we could take advantage of an unexpected treat, While we were undergoing our undercarriage replacement last night, one of the train guards had come through and distributed voucher for breakfast and lunch in the dining car. That said breakfast consisted of a boiled egg, a few pieces of bread and some butter and jam was neither here nor there – it was free, fresh food. After we had eaten, we went back to the compartment to start packing and then back to dining car for our free lunch – rice, veges, and a delicious dish of sausage, carrot and some sort of root vegetable in a tasty sauce. After a few weeks of Mongolia's meat-and-noodle-dominated dishes, Kate was in heaven. 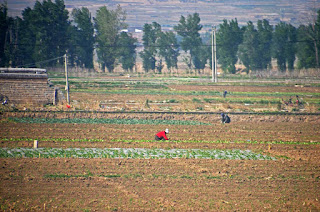 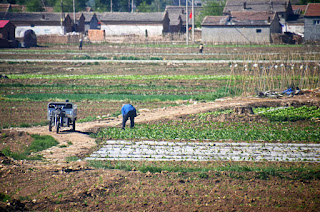 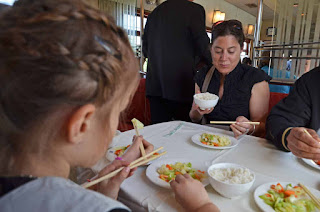 By now the train was travelling through some quite dramatic scenery and after lunch, the Western passengers all crowded around the two open windows beside the corridor wielding their cameras and taking hurried snaps between tunnels. As we pulled into Beijing just before midday, the air coming in through those same windows signalled our arrival in warmth. Although it was still fairly early, the temperature was now in the high 20s, on its way to the low 30s. 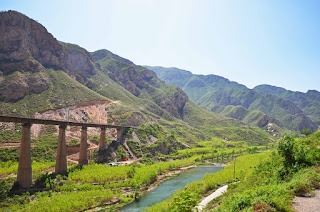 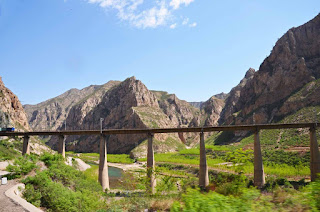 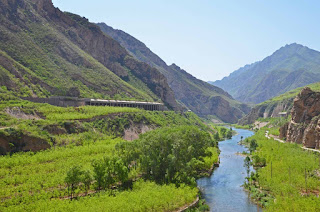 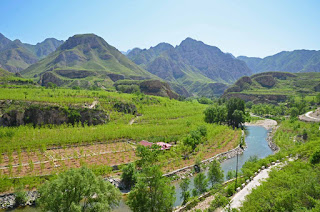 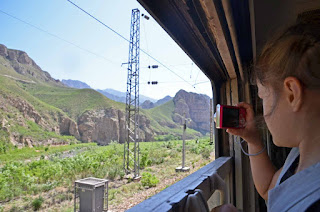 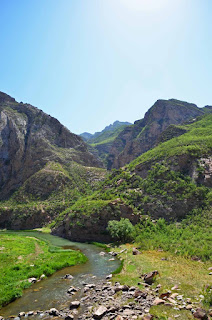 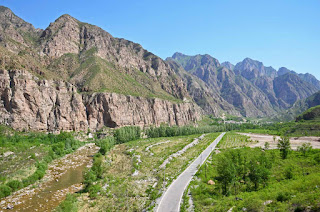 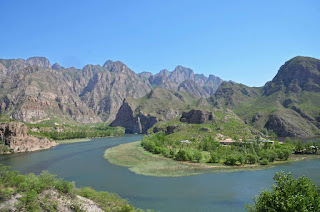 After getting off the train, the first order of business was to pick up the tickets for our various jaunts on the Chinese railways, which I had bought online. This was easier said than done. We cycled through a number of ticket offices/counters before we found the right one and when we did, we discovered that I hadn't printed out enough of the confirmation details. The woman also wanted more money from me, which I wasn't expecting – I thought they were fully paid for. Eventually, she started to say 'Commission, pay me' and we realised that there was a separate (and thankfully nominal) payment that had to be made because we were getting the tickets from a station different to the one that we would be leaving from. Because we couldn't get all of the tickets in one go, we gave up and went in search of the metro, so that we could get to our hostel. This proved to be much simpler – and indeed, the journey was quite a pleasant experience: the carriages are air conditioned and the whole system is relatively user-friendly.

Emerging from the metro, we pulled out Kate's iPhone and set about trying to use Google Maps to find our way to the hostel. But try as I might, I couldn't figure out how our apparent location on the map related to what I was seeing around me. A friendly local stopped and asked if we needed help and after figuring out where we wanted to go, he pointed us up and across the road. We thanked him and headed off, but I still couldn't reconcile the map with our surroundings. And then it hit me – the strange and rather large shaded circle around our location on the screen was indicating the error that had been introduced into the GPS location by the Chinese government. It was showing the general area in which we could be found, rather than pinpointing our exact location. Armed with this knowledge, I fell back on my old-school map-reading skills and had us at the hostel in no time at all.

As we were checking in, the Australian couple from the train arrived. They, too had been relying on Google Maps, and had managed to get comprehensively lost, which made me feel a little better. The hostel is located in one of Beijing's famous hutongs – narrow, quiet streets or alleys formed by lines of traditional courtyard residences. The hutongs lend Beijing a wonderfully near-rural feel. Tree-lined and relatively peaceful, they run perpendicular to the main shopping streets, so it's possible to go from the hustle and bustle and glitz and glamour of a super-modern mega-city to something akin to a little village street in the space of just a few metres.

After checking in, we walked outside and into a small restaurant two doors down, where we had one of the nicest Chinese meals I've ever had. My mum was born in Shanghai and grew up in Hong Kong, so Chinese food has been a staple for me for as long as I can remember. Growing up, rather than settling for whatever was on our doorstep, we would always seek out a better class of restaurant, with more authentically Chinese food. But nothing I've eaten in the past really compared with this meal - the food, which arrive almost as soon as we had finished ordering, was simple, but the flavours were clean, fresh and complex. There was a very helpful menu with pictures and English names for all of the dishes, but we didn't look quite closely enough at one of the pictures, so one of the dishes we ended up with was pork with some pretty powerful chillies, but even that was really nice. We also got some chicken, veges and sausage fried rice.

After lunch, I headed back to the railway station – on foot this time – to pick up the tickets, passing a few odd sights on the way there and back, including a guy sitting on a step outside a shop with a big freshwater turtle on a leash and a big group of middle-aged Chinese sitting around in a little park outside a hotel while their fancy-looking dogs of all shapes and sizes gambolled around them.
Thankfully, this time the ticket transaction took place with a lot less bother and hassle, although it did take some time, causing much consternation among the locals in the queue behind me (I wanted to turn around and tell them to get in a different queue, but, language barrier...).

In the evening we went out in search of a nearby night market. The directions we were given at the hostel front desk were wrong, but we found it eventually, but then we almost wished we hadn't – it turned out to be a wholly sanitised simulacrum of a night market, with a single row of stalls, all selling the same thing, set up beside a busy road. The food looked anaemic, the stall holders slightly desperate, this was not what we were after at all, and we turned, disappointed, and headed back to our hutong, where we had a pretty good dinner in a duck restaurant across from the hotel. 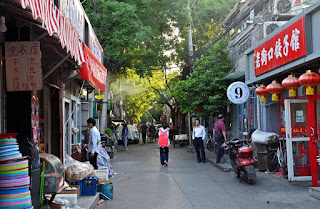 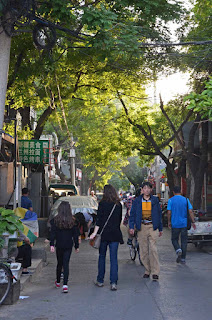 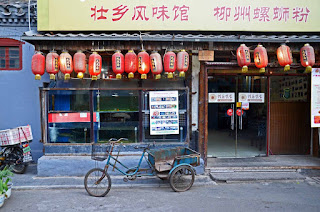 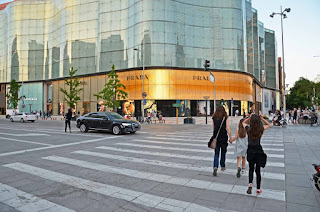 During our wandering we're already noticing that the girls are having a bit of trouble adjusting to the Chinese traffic – Zoe in particular. Having seen the way that the UB drivers behave, they're now pretty good with the cars and trucks, but Beijing traffic is half cars and half bikes and scooters/mopeds. These latter vehicles act as if they're a hybrid of car and pedestrian, happily ignoring the laws that apply to both – they sail through red lights, drive on the pavements and generally just go wherever they want, whenever they want. To make matters worse, the scooters are mostly electric, so they're virtually silent. This can create some pretty surreal scenes, with great hordes of them zooming by without a sound, but can also pose a real danger to the uninitiated and the non-vigilant, as it's all too easy to step in front of a rapidly approaching scooter if you're not super careful.
Posted by SGKZ at 04:48