In the morning we walked up to Holiland for breakfast and then to the post office. As we've well and truly switched climatic zones now, we won't be needing our hats and scarves and the like, so we posted them all home. Thankfully, the woman helping with the sending of packages was incredibly helpful – and even spoke a bit of English. While we got ourselves sorted out, we watched with fascination as the people around us posted off huge collections of stuff in great big sacks. When we got to the final payment stage, Kate and the girls left me in the queue and went back to our fantastic supermarket to start choosing what we needed for tonight's train ride to Huangshan. As I waited, I heard a mysterious loud, explosive sound coming at regular intervals from somewhere nearby. After I had paid, I, too, headed for the supermarket and on the way there, I discovered the source of the sound – there was an old guy standing outside the metro station cracking a huge bullwhip. Of course.

In the supermarket we bought some pot noodles, wine, Coke and snacks for the train and then went back to Holiland to get some stuff for tomorrow's breakfast. Then it was back to the room for a quick shower (it was already very hot and humid) and to finish packing, then we checked out and hopped back on the metro to Beijing West station. This time, the waiting room was really rammed so we set ourselves up in an empty space next to one of the walls. Kate and the girls went off to get some McDonald's for lunch while I sat with the bags and watched the hawkers walking around selling little collapsible stools and strange toy fish that lit up, drove around the floor and sang.

Soon enough we were on the train and in our compartment. The beds were made, the air conditioning was on and all was well in the world. Well, almost. In the cabin next door was a woman with a small child, for which she had bought one of those singing fish... We were soon celebrating, however, as Sarah finished the first of her workbooks. Poor old Kate has been carrying these books, which are surprisingly heavy - in her pack since we left the UK, so she was particularly pleased about Sarah's achievement. 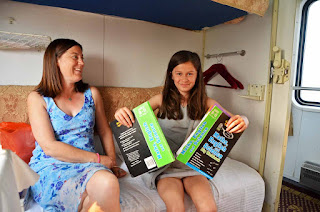 The train took us through lots of wheat fields, where lots of people appeared to spraying lots of pesticides on the crops. And as the big orange sun sank towards the horizon, we dined on pot noodles and a rather nicer bottle of Chinese red wine than the last one we had – indeed, I would say that it was a pretty pleasant drop. We had a bit of a laugh as we ate – whenever we choose our pot noodles Kate spends significantly more effort than the rest of us trying to ensure that there's no chilli in hers (poring over the ingredients, peering at the pictures on the outside and even asking the supermarket staff). It's not that she particularly dislikes chilli, but when these Asian pot noodles are hot, they can be inedibly hot to our sensitive palates. But somehow, despite all of her efforts, she always seems to end up with a hot one – and tonight was no exception. 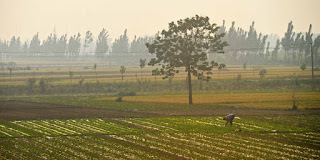 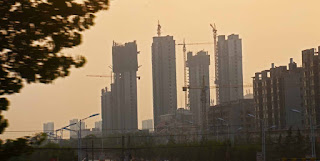 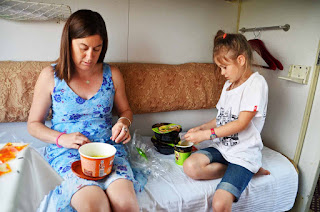 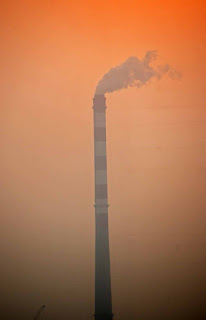 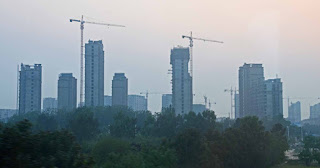 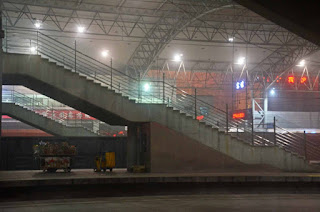