We passed into a new climatic zone last night. It's significantly wetter here, and instead of wheat, everyone's growing rice. The landscape is also a lot hillier, and many of the hills are covered in lush, green vegetation, including a lot of bamboo, and are often cloaked in mist. In among the stands of bamboo, we can see ornate little graves, many surrounded by offerings of various sorts. The architecture appears to be pretty much purely functional. The buildings are mostly concrete boxes, at most two or three storeys tall, painted white or grey and festooned with washing. There are little nods to tradition on the roofs, with the traditional crescent-shaped tiles and ornate little tile-topped walls extending from the front and rear.

The train arrived at Huangshan station earlier than we expected, so we had a bit of a mad, panicky scramble to get everything packed up. Thankfully, the train terminated here, so we didn't have to worry about missing the station. When we left the air-conditioned train we were enveloped in a miasma of warm, moist air. Entering the car park, we were instantly surrounded by a small crowd of hawkers and touts - old women trying to sell us maps, younger ones trying to sell and tours and the inevitable 'very helpful' taxi drivers: 'Where you want to go?' We eventually chose a driver and made the short drive into town. When he stopped, he made a call and handed his phone to me. On the other end of the line was a woman who spoke English. At first I assumed it was someone from the hotel, but she explained that the driver wanted to know if we wanted to book his services for a tour of some sort. Indeed, she, too, was a taxi driver, and she would also be happy to show us around... I politely declined, paid the driver and we grabbed our bags. The driver indicated where we should walk, we shouldered our loads and headed off.

Out hotel was conveniently located at the end of Huangshan's Old Street, but we quickly discovered that it was inconveniently located at the other end of Huangshan's very long Old Street. Like Pingyao, the street has some lovely old building on it, but also like Pingyao, they're now being used to sell a relatively limited selection of souvenirs and local delicacies. However, it was pedestrianised and bustling and aesthetically pleasing, so we were happy enough.

When we finally made it to the hotel, we checked in to our triple room. Thanks to the one-child policy, family rooms typically come with only three beds, so quite often the girls are forced to share a bed. Luckily, the beds are usually a bit larger than a typical single, so this hasn't really been a problem. Once we had settled in, we headed back out to see what we could find for lunch. Huangshan (which used to be called Tunxi) is located at the confluence of two (or maybe three) rivers, and our hotel is located very close to a bridge across one of them. After taking a quick look, we walked down Old Street, but it didn't seem to have any restaurants on it, so we walked its entire length, back to the little square where the taxi had dropped us off. There we found a side street with a number of restaurants on it - restaurants that also resembled pet shops. Outside of each of them was a collection of buckets and cages containing a wide variety of live animals, including frogs, turtles, fish, pheasants, guinea pigs, eels and so on, none of which were destined to be pets of course... 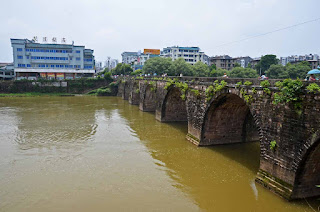 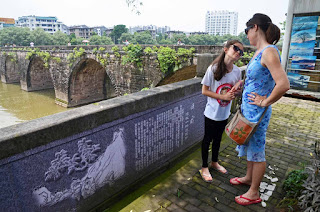 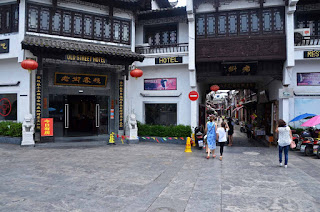 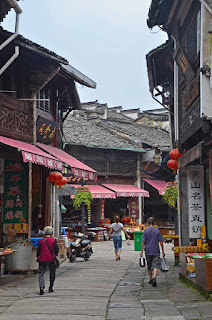 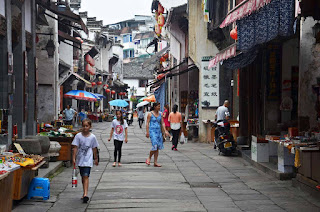 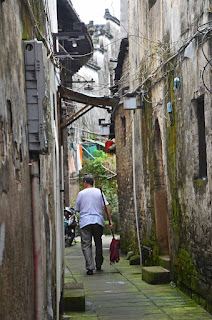 We eventually chose a restaurant and started trying to make sense of the menu (although there was at least one dish we certainly wouldn't be ordering). We obviously failed, because when we tried to order, it seemed to cause great confusion among the staff. Eventually, they pointed us to a selection of pre-cooked dishes on a table beside the wall and we were urged to just chose from among them. This we duly did (some very nice braised pork spare ribs), supplementing it with some noodles and rice. After lunch we had a bit of a wander around town, passing a number of establishments filled with oldies playing mah jongg. 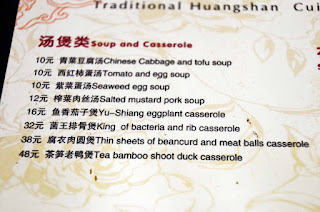 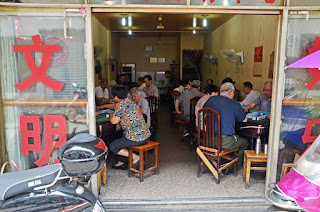 Back in the room, I had a bit of a nap while Kate planned our activities for the next few days. Then we went back out for dinner. This time we had consulted TripAdvisor and settled on a great big place located right at the other end of Old Street. When we got there, we were handed a little bamboo chit with a number on it and ushered down a few stairs to where the open kitchen is located. There we were given a special notepad and a pen. Running the length of the restaurant, the kitchens are separated from the diners by a long bar, on which are arranged all of the available dishes. A helpful diner explained the way it all works: first, you choose your dishes and write the corresponding numbers on the notepad, along with your chosen quantities and your chit (table) number; then, you hand it to the waiting waitress and go back to your table to await the arrival of your freshly cooked food. What fun! Of course, we over-ordered (how could you not?) and ended up with a few things that weren't really to our taste (naturally, this is China after all), but the food was delicious and extremely cheap and we vowed to return again tomorrow night. 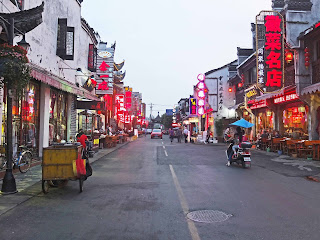 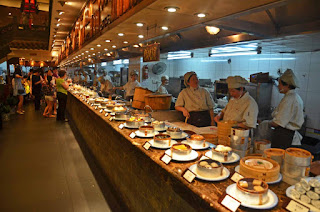 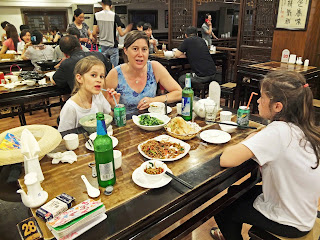 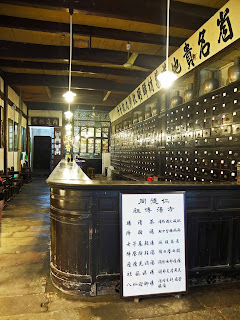