Zoe woke up feeling sick when the alarm went off at 6am this morning - her insides had pretty much turned to liquid. In other circumstances, we would probably have cancelled our plans for the day, but this was our one chance to see the Great Wall, so we did our best to empty her out and then headed for the metro (please don't judge us!). As we crossed the street, Zoe said she felt unwell, and when we reached the other side, she was sick on the pavement. Kate said she would take her back to the hotel And then Zoe was sick again. Kate was adamant now that the two of them should go back, but Zoe insisted that she would be okay, so we bought our tickets and headed down into the subway.

We didn't have very far to go and were soon walking to the bus station. One of the helpful staff in our hostel had written down some details of where we wanted to go in Chinese characters for us. At the exit to the metro station, some uniformed women waited to give directions for the buses and when we showed our piece of paper to one of these women, she gathered us up and took us into the terminal. She didn't really speak English (very few of the people we met in China do) but she made it known to us that the bus we had planned to take was very slow – a stopping bus that would take two hours to get to our destination. She ushered us onto a different bus that she said would only take an hour. With no real idea ourselves, we surrendered to her ministrations and were soon on our way. Sadly, her one hour estimate was 'under normal circumstances', as they say - not when there had been a nasty accident on the freeway, which took us at least an hour to crawl past (during which time poor old Zoe brought up a bit more bile into a plastic bag).

It was about 10am by the time we made it to the town we were heading for – which Kate and I had assumed would be some sort of dusty outpost but was actually an enormous, shiny city. We didn't really know where to get off the bus – and at every stop, touts would jump on and loudly inform us that this was where we were supposed to be getting off – but get off we finally did, to be greeted by more touts quoting prices for getting us to the wall itself. Those prices seemed too high and none of the touts spoke much English, but Kate eventually settled on a nice, friendly middle-aged man (the least insistent of the people crowding around her) and we settled on a price and hopped into his car for the hour-long drive to Mutianyu. The wall itself is, of course, very long and much of it is in a state of extreme disrepair. We had hoped to visit one of these sections of 'wild wall' as we thought they would be more photogenic and less crowded, but they were of course more difficult to get to and we were a bit worried about taking the girls onto them as they were reputed to be quite dangerous (indeed, we later met some people who had done so and they said they had feared for their safety and had really struggled to get around). Instead, we opted to visit a section that was more developed, with a big visitor centre and good access to a big section of restored wall.

By the time we got there, Zoe had perked up a bit, and did a bit more when we bought her something to eat at Burger King. By then we had bought our tickets – we opted to get a chairlift up, rather than walking and to take a rather novel method for getting back down, more of which later. The wall itself was as impressive as we had hoped – a crenellated grey ribbon clinging to a jagged ridgeline, steep mountainsides falling away on each side. The chairlift deposited us close to one end of the restored section and we chose to walk towards that end. The stairs were steep and the sun pretty hot (although there was a lovely cool breeze), so Kate and Zoe stopped beside one of the watchtowers while Sarah and I continued on – up a particularly steep section. We passed numerous puffing and panting tourists – although, mercifully, not that many, as again we're visiting out of season – and eventually made it to the last watchtower, beyond which the wall hasn't been restored, the walkways choked with vegetation and the brickwork crumbling away. The watchtower is at a crossroad, and in one direction it was possible to walk out onto the unrestored wall (past a sign bearing a prohibition to do so). Sarah wanted a rest, so I left her in the cool shade of the watchtower and headed out along the wall, eventually reaching a delapidated watchtower where a few other tourists were taking in the pretty spectacular view. 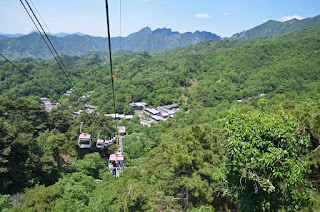 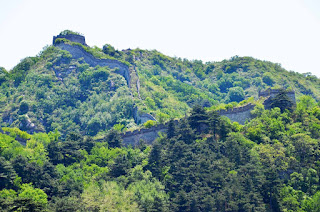 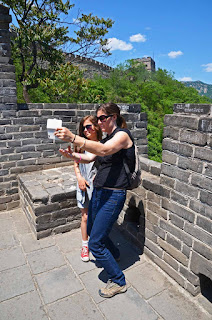 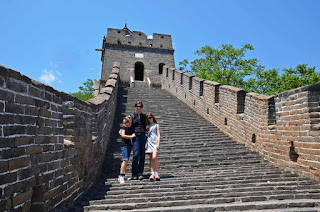 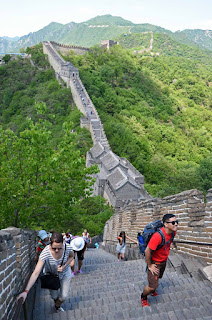 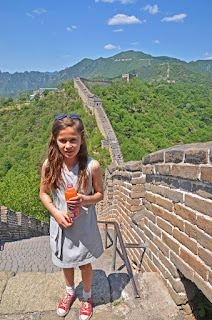 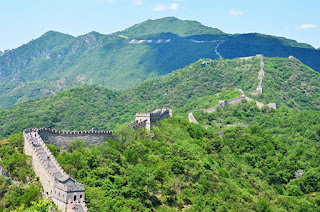 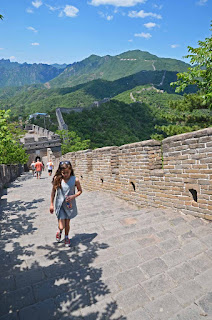 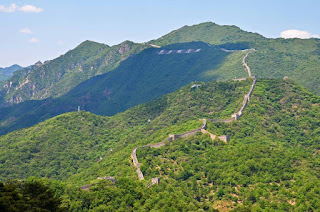 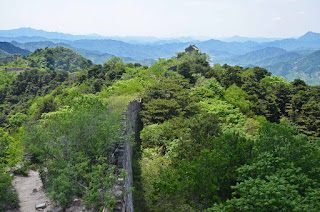 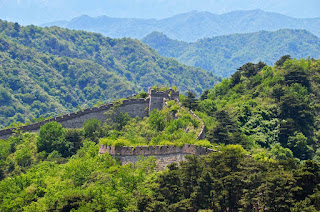 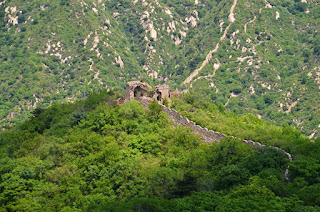 Backtracking, I picked up Sarah (who had had to pose for a few more photos while I was gone) and then Kate and Zoe, and we made our way back. It was now time to descend back to the visitors centre, a prospect that had the girls particularly excited. One of the reasons that we had chosen to visit this section of the wall was that it was possible to get back down via a toboggan – riding little carts down a metal track (just like the one at Jindabyne but quite a bit longer). I went first so that I could feed my need for speed, but sadly, there were attendants stationed at regular intervals exhorting you to slow down, a practice that became redundant when I caught up with a group of women going down at a snail's pace. 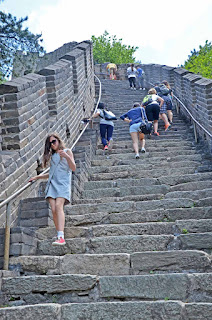 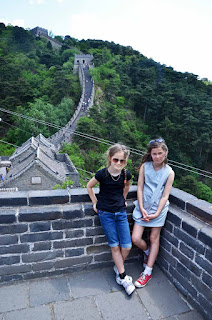 At the bottom we met up with our driver and drove back to town, where he put us on the bus back to Beijing. There we showered, rested, and then headed out for dinner. We had planned to go back to the place where we first ate, but it was heaving, so we looked around for somewhere to get a beer and play cards while we waited for a table to become free. Our first choice was the little Western-style cafe next door to our hotel, but when Kate enquired about the prices, they quoted her 60 yuan (£6) for a standard 330ml bottle. Ha! After a lot of wandering around, we ended up sitting on tiny stools out the front of another restaurant down the street, where we got 600ml bottles for 6 yuan. We quickly became an object of fascination for the restaurant staff and had to interrupt our card game for an impromptu photo session (that quickly involved a few passersby as well). 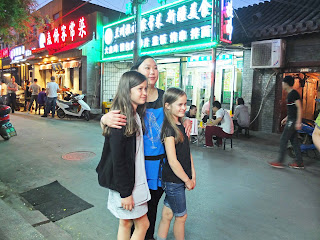 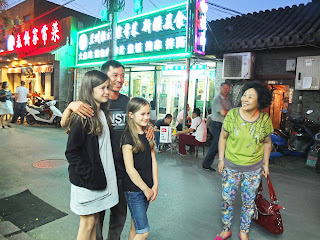 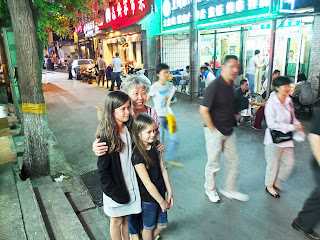 A bit later, the guy from the restaurant called over that our table was ready and we enjoyed another incredible meal – pork, beef, duck (complete with head), veges and fried rice, soft drinks and another beer for the equivalent of about £14. 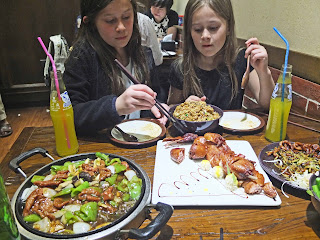