Day ten: Learning the ropes... and the cats

The day started with the beginning of our cat tuition – lessons on who needs to be fed where and with what. I've since done a quick census and I reckon that there must be about 35 to 40 cats that hang around in the vicinity of the house. Two or three of those sleep and eat in the kitchen, about 10 or 12 sleep in or out of cages in a special shed (where they also get fed) and the rest fend for themselves.The girls started to pick up the cats' names straight away, but I'm still struggling.

At breakfast, we were joined by Jacky's Scottish friend Marjory, who had flown over from Fife to accompany Jacky on her mercy mission back to the UK – the two of them were going to transport six (later revised to five as one of them was diagnosed with a fatal disease known as FIP) cats over in Jacky's disturbingly small car. This would involve getting the ferry from Syros to Pireaus, driving across Greece to the port of Patras, catching the 24-hour ferry to Ancona in Italy, driving from there to Calais and getting the Eurotunnel to Folkestone, and then finally driving to London. Breakfast turned out to be a very long and leisurely affair – finally brought to an end by Marjory's quiet but firm insistence that they should probably start preparing for their journey (Jacky clearly doesn't do anything in a hurry).

In order to get out of their way, we decided to go and check out the beach. Now, when Jacky had driven back to her house the previous night, she had taken the back way, and in our tired, disoriented state, it felt like her house was quite a long way from the beach. Both of us had felt our hearts drop as we drove further up the hill, convinced that we were staying too far away to walk down for a swim. So, it was a great relief when Jacky told us it was an easy walk - and upon making that walk, we discovered that we could be there in about five minutes. 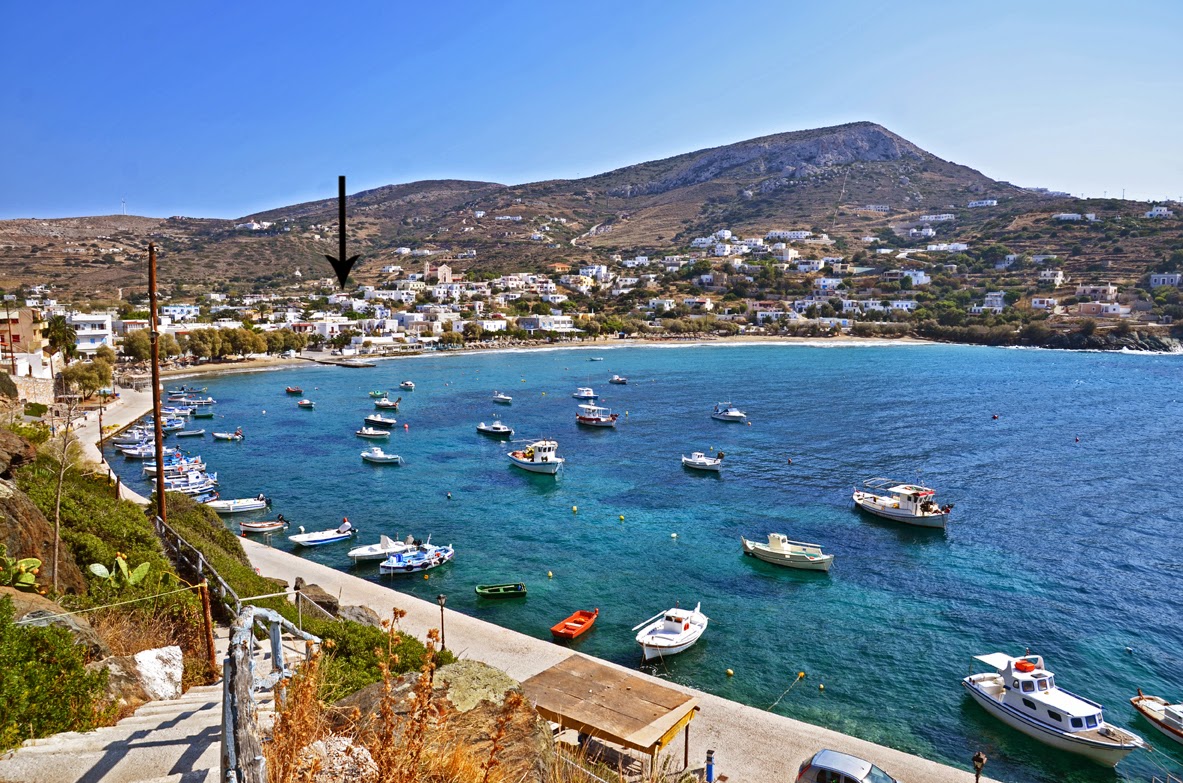 The little settlement of Kini proved to be quite sweet – just a collection of houses and tavernas (four of which were open), a few small hotels and a couple of mini-markets. It's situated on a wide, round bay and has a long sandy beach fringed with palms and a type of small salt-tolerant cypress tree (known locally as the armirikia tree). The sea was dead flat when we arrived and the shallow water was a bit on the warm side, but Kate and the girls had a nice paddle as I explored Kini itself, looking for somewhere to have lunch. 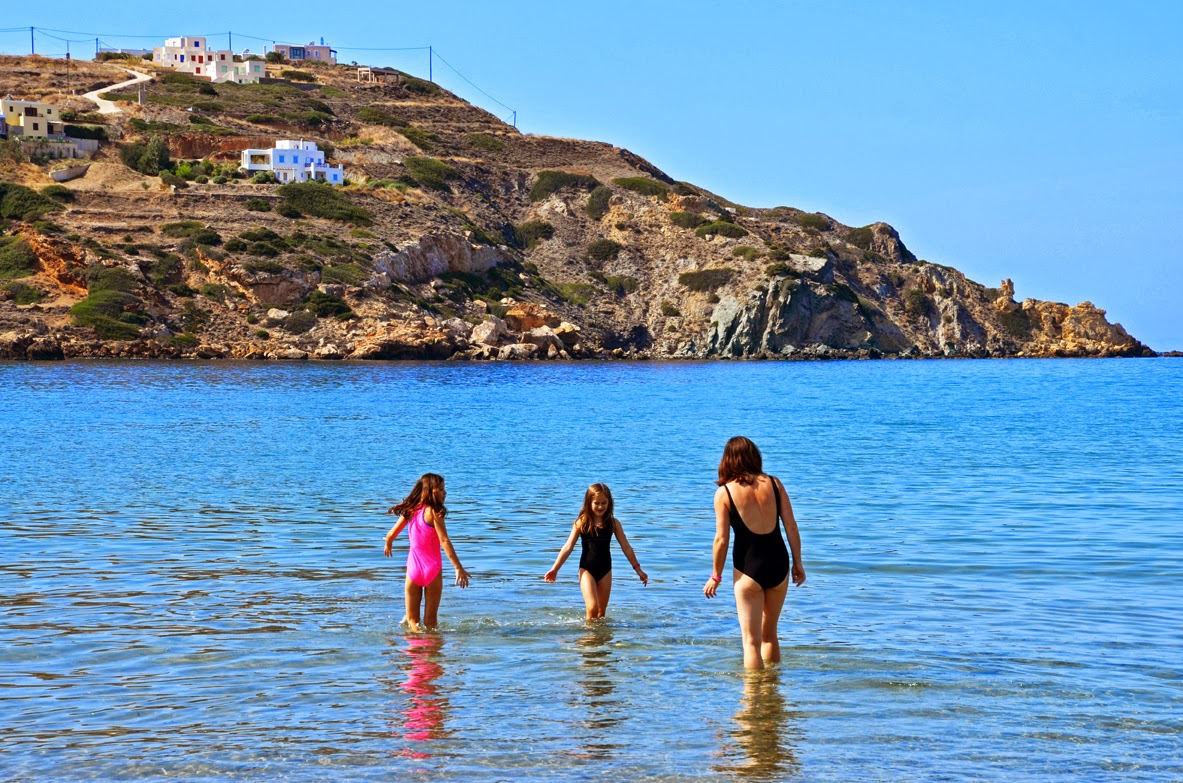 I settled upon a taverna by the name of Two Cicadas on the Armirikia Trees, where we ordered the mandatory tzatziki, some tabouleh and a couple of sausage dishes – and two beers (we've settled on Fix as our tipple of choice – you can get a half-litre bottle at the supermarket for less than a euro and there's even a 14-cent refundable deposit on the bottles; and it goes down very nicely). Looking through the menu, we spotted something that we would go on to see regularly in other restaurant menus – virtually all of the seafood is cooked from frozen. The Med has largely been fished out and getting hold of fresh fish on Syros is quite a task - one that we still haven't achieved after more than a week here.

The meal was lovely, marred only by the fact that the cypresses were in flower and gave Kate terrible hay fever – she was snuffling and sneezing for the rest of the day. It also gave us a bit more of an insight into Syros's stray-cat situation as about ten hungry felines swarmed around our feet throughout the meal.

After lunch, Kate and I made ourselves busy around the house, sweeping paths and generally tidying up. There's a small walled garden attached to the main house that has a stone-built covered alcove in it, and I gathered up all of the bits and pieces that had accumulated in the garden and put them in the alcove – it's in this garden that we now eat our dinners.

Later, I cooked some some pasta for everyone and then we sat around and watched Jacky and Marjory pack – their ferry wasn't due to leave until 2am – before saying goodnight and goodbye to, and exchanging hugs with, the intrepid cat couriers.